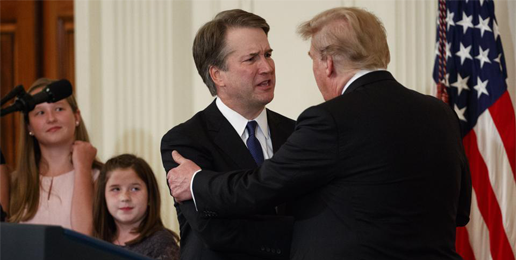 In an email, conservative Chicago attorney Joseph A. Morris, former Assistant Attorney General of the United States, President and General Counsel of The Lincoln Legal Foundation, and frequent guest on WTTW’s “Chicago Tonight,” told IFI that he is “thrilled by the nomination of Brett Kavanaugh,” elaborating,

Brett Kavanaugh is smart, learned, and honorable. He is exactly what President Trump promised to nominate and appoint: An originalist in the tradition of the late Antonin Scalia. With his hundreds of finely written, rigorously-reasoned opinions as a judge of the Court of Appeals, Judge Kavanaugh’s jurisprudence is literally an open book. He will make one of the finest Supreme Court justices in history.

While “progressives” work fast and furious to do what they do best—that is, manipulate emotions—Mr. Morris works to quell nerves jangled by the paranoia of people untethered to reality, wisdom,  or the Constitution:

Although the work of judges is not, and should not be, political, the nomination, confirmation, and appointment of Federal judges are necessarily political acts.

Much wailing will be heard, and ink will be spilled, this summer, regarding President Trump’s asserted “politicization” of the judiciary. A few simple numerical facts about the current staffing of the higher levels of the Federal judiciary may help put things in perspective.

Staffing of the United States Courts of Appeals:

Mr. Morris is far from alone in his assessment of Judge Kavanaugh. All across the country, voices of support for Kavanaugh’s nomination are sounding. American Center for Law and Justice’s Jay Sekulow wrote,

The nomination of Judge Kavanaugh to fill the vacancy created with the retirement of Justice Anthony Kennedy is a superb choice who is certain to serve this nation well. Judge Kavanaugh is a brilliant jurist who embraces the philosophy of our Founders—an unwavering commitment to the rule of law and the Constitution.

The Thomas More Society released a statement, saying in part,

The Thomas More Society applauds President Donald J. Trump’s nomination of Judge Brett Kavanaugh to the Supreme Court of the United States…. “We are excited to see the President nominate a great human being who is one of the finest legal minds of our time. Judge Brett Kavanaugh has a proven track record of judging fairly, always applying the Constitution and our laws as they are written. We look forward to his confirmation and anticipate that he will distinguish himself in his time on the high court.”

“By any measure, Judge Kavanaugh is one of the most respected federal judges in the country and I look forward to supporting his nomination to the Supreme Court of the United States. For over a decade, Judge Kavanaugh has served on the U.S. Court of Appeals for the D.C. Circuit, often referred to as the second highest court in the land. He has over 300 published opinions, with a strong record of defending the Second Amendment, safeguarding the separation of powers, reining in the unchecked power of federal agencies, and preserving our precious religious liberties.

Even National Review’s David French, who was an impassioned proponent of Amy Coney Barrett, said, “Kavanaugh will be an excellent judge.”

Be of good, cheer, friends. This is most definitely not a terrible, horrible, no good, very bad day. Thanks to President Donald J. Trump and his crack team of experts, it’s quite the opposite.