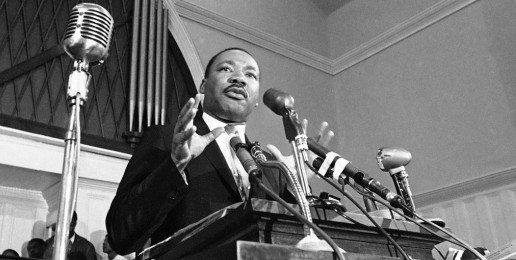 Ever notice how the secular left conveniently omits the fact that Dr. Martin Luther King Jr. was a devout Christian minister?

While, historically, there have certainly been apostate “Christians” who, in the name of Christ, have abused and taken out of context certain biblical passages to support slavery, segregation, racism and other evils – it has been, without fail, true Christians, that is, Bible-believing Christians of every race, color and creed, who have led the charge in defense of all legitimate human (and civil) rights.

The Rev. King was one such Christian, and though he and other Christian leaders have, no doubt, welcomed aid and support from honorable and like-minded secularists over the centuries, it was and remains Christians – Bible-believing brothers and sisters like MLK, William Wilberforce, Harriet Tubman, Dietrich Bonhoeffer, et. al. – who have, indisputably, embodied the most effective and well-known of all humanitarian and civil rights activists.

Even so, in recent decades, sadly, and in what amounts to a sort of soft racism, a mostly white, hard-left movement of secular extremists has managed to hijack MLK’s Christian legacy and invoke his character-based “dream” to advance their own anti-Christian agenda and behavior-based nightmare. I am referring, of course, to homosexual activism (i.e., the push for so-called “gay marriage” and “gay rights”), which, by its very nature, and unlike MLK’s “dream,” is a wholly counter-biblical endeavor.

On all issues, particularly issues relating to morality and human rights, God’s word is the plumb line by which all truth is measured. “The moral law or the law of God,” as MLK called it, was, in fact, his exclusive guidepost and primary motivation. From a biblical standpoint, racism is objectively immoral, and Rev. King understood this – so he spent his entire life, gave his life in fact, working to secure civil and human rights for racial minorities.

Similarly, from a biblical standpoint, homosexual behavior, or “the sin of Sodom” as it’s oft referred, is likewise objectively immoral (along with its oxymoronic offshoot: counterfeit “same-sex marriage”). Jesus defined marriage for us. His definition is reflected in the spiritual, biological and in-every-other-way-self-evident order of His divinely defined design. “‘Haven’t you read,’ he replied, ‘that at the beginning the Creator “made them male and female,” and said, “For this reason a man will leave his father and mother and be united to his wife, and the two will become one flesh”? So they are no longer two, but one flesh. Therefore what God has joined together, let no one separate’” (Matthew 19:4-6).

Moreover, the very thing that defines “gay marriage,” the biologically and spiritually disordered act of same-sex sodomy, is, likewise, a counterfeit. It mocks God’s design for natural sexual intercourse.

Indeed, the Bible, throughout both the Old and New Testaments, unambiguously condemns as “vile affections,” as sin rising to the level of “an abomination,” all same-sex sexual conduct, be it, “loving, monogamous and committed,” or otherwise.

And “gay marriage” is mock marriage.

So-called “gay rights” represent nothing more than moral wrongs. Homosexual sin has nothing whatsoever to do with civil rights and, based upon what we know of the Rev. Martin Luther King Jr., he would have wholeheartedly agreed. While he said little in public on the issue, what he did say made his viewpoint abundantly clear.

But don’t take my word for it. Unlike the “LGBT” lobby, I’ll let Dr. King speak for himself. In 1958, while writing an advice column for Ebony Magazine, Rev. King responded to a young “gay” man looking for guidance. To avoid being accused of “cherry-picking,” here’s the exchange in its entirety:

Question: My problem is different from the ones most people have. I am a boy, but I feel about boys the way I ought to feel about girls. I don’t want my parents to know about me. What can I do? Is there any place where I can go for help?

Answer: Your problem is not at all an uncommon one. However, it does require careful attention. The type of feeling that you have toward boys is probably not an innate tendency, but something that has been culturally acquired. Your reasons for adopting this habit have now been consciously suppressed or unconsciously repressed. Therefore, it is necessary to deal with this problem by getting back to some of the experiences and circumstances that led to the habit. In order to do this I would suggest that you see a good psychiatrist who can assist you in bringing to the forefront of conscience all of those experiences and circumstances that led to the habit. You are already on the right road toward a solution, since you honestly recognize the problem and have a desire to solve it.

No amount of leftist spin can muddy Dr. King’s lucid position on the homosexual lifestyle. He recognized it as a “culturally acquired” “problem” in need of a “solution” – a “habit” stemming from a series of negative “experiences and circumstances.”

Although homosexual activists desperately cling to the fact that, after his death, Dr. King’s wife, Coretta Scott King, did voice some level of support for the homosexualist political agenda, the undeniable reality remains that, based upon his own words, Dr. King supported neither homosexual conduct nor “LGBT” political activism.

Neither would he have supported same-sex “marriage.”

To be sure, in 2005 Rev. King’s daughter, Bernice King, led a march to her father’s graveside in support of a constitutional amendment to defend natural marriage. Sharing his position on the issue, she later said that her famous father “did not take a bullet for same-sex marriage.”

Indeed, it strains credulity to suggest that MLK, a man of the Bible, would have thrown his weight behind a political movement hell-bent on justifying unbiblical sexual appetites and behaviors that he properly identified as “a problem” demanding “a solution” – a “type of feeling” that requires “careful attention,” up to and including “see[ing] a good psychiatrist.”

No, MLK was a Christian minister who both embraced and articulated the biblical “love the sinner, hate the sin” model on homosexuality. Every Christian should follow his lead. After all, it is the lead set by Christ Himself.

And so, how would MLK have responded to the Supreme Court’s recent opinion presuming to invent a “constitutional right” to sodomy-based “marriage”?

It’s clear how he would have responded.

As it was with the national sin of systemic racism, there can be few things more “out of harmony with the moral law” than the inherently immoral notion of sodomy-based “marriage.”

And so the good reverend would have opposed it.

Quite likely, he would have led the charge against it.