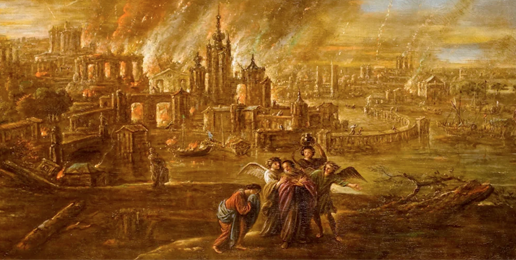 Recently on social media and in the past, various people have claimed that Sodom was destroyed because the citizens of Sodom were not helping the poor. Is it true that the great sin of Sodom was a failure in assisting the poor or is there more that Scripture would state about the great judgment? The city of Sodom is first mentioned in Scripture in Genesis 10:19. Three other cities were in the vicinity of Sodom: Gomorrah, Admah, and Zeboiim. Often the cities of Sodom and Gomorrah are mentioned together but Sodom stands out in the listing of these cities and is mentioned the most of the four cities in Scripture – 49 times.

In Genesis 18:20 we learn that the sin of both Sodom and Gomorrah was very grave. In the next chapter we learn more about why this description was given. In Genesis 19, two angels, who appeared to look like regular men, visited Sodom. Lot met the two angels at the gate and offered them hospitality at his house. Before they went to bed, the men of Sodom, young and old, surrounded Lot’s house. They called to him, “Where are the men who came to you tonight? Bring them out to us that we know them carnally.

The word carnally is added by some translations, but the verb to know used here has that same meaning. The clear context is that the men of Sodom intended to engage in perverse sexual relationships with Lot’s two guests. The men of Sodom, as the story unfolds, were clearly not wanting to just say hello to the new guests. This wasn’t an invitation, but a forceful attack.

Lot refused the request. Pressing the limits of hospitality to the maximum, he even offered his two virgin daughters to the men of Sodom. This offer was not accepted and so the men of Sodom attempted to break down the door to Lot’s house. The attempted gang rape would have succeeded in if the angels hadn’t struck the men surrounding the house with blindness.

The rest of Genesis 19 speaks of how Lot and his family were delivered from Sodom before the LORD reigned down brimstone and fire on Sodom and Gomorrah. Reading this chapter it is clear that  a central part of the sin of Sodom was their perverse sexual desires.

Sodom is mentioned a number of times in the Old Testament following this gruesome account. Israel at times is compared with Sodom and Gomorrah because she also deserved judgment. It is a passage in Ezekiel 16 that adds to our understanding of why judgment came upon Sodom and that some want to use to say Sodom was not judged because of her sexual proclivities.

Indeed, we cannot ignore this passage and what we learn in verse 49 that part of the sin of Sodom was her pride, idleness, and failure to help the poor and needy. But when we read the Bible it is important to not just cherry-pick verses. Without denying anything  in Ezekiel 16:49 we should look at the next verse.

50 And they were haughty and committed abomination before Me; therefore I took them away as I saw fit.

Verse 50 clearly is a reference to Genesis 19. How do we know that? The same word abomination is used in Leviticus 18:22 and 20:13 when describing the perverseness of homosexual conduct.

So we do not ignore verse 49, but stopping at verse 49 and saying that the sin of Sodom was that the people didn’t vote for Bernie Sanders and support other redistributionist schemes is to clearly misread Scripture. Verse 50 is just as important.

A final passage from Jude 7 makes this clear.

Jude 7 as Sodom and Gomorrah, and the cities around them in a similar manner to these, having given themselves over to sexual immorality and gone after strange flesh, are set forth as an example, suffering the vengeance of eternal fire.

Christians must never read the Bible to think highly of ourselves. Jesus condemns those who are thankful that they are not like other sinners and boast in their own righteousness. However, we must also not read the Bible to justify the sexual sins of our culture today. The example of Sodom and Gomorrah stands as a testimony today. The call of the gospel to all sinners is to recognize that God’s wrath stands over us until we turn in faith and submission to the Lord Jesus Christ.

1 Cor. 6:9 Do you not know that the unrighteous will not inherit the kingdom of God? Do not be deceived. Neither fornicators, nor idolaters, nor adulterers, nor homosexuals, nor sodomites, 10 nor thieves, nor covetous, nor drunkards, nor revilers, nor extortioners will inherit the kingdom of God. 11 And such were some of you. But you were washed, but you were sanctified, but you were justified in the name of the Lord Jesus and by the Spirit of our God.

And such were some of you… If you are reading this message and you know you are still living in your sin and rebellion before a holy God, know that there is mercy and grace shown to those who will confess their sin and turn to the Lord Jesus Christ. There is full cleansing for all sinners!