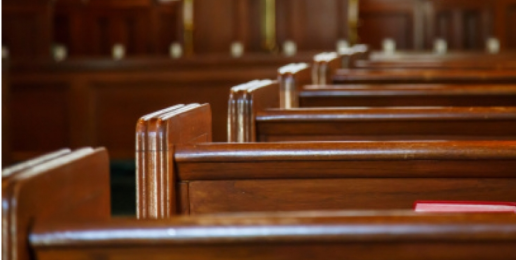 In John, chapter 2, we read the account of Jesus entering the temple and being disgusted by what He saw. John 2:14 says, “In the temple He found those who were selling oxen and sheep and pigeons, and the money-changers sitting there.”

Jewish coins were the only valid currency in the Temple; Roman coins were not accepted. So, there had to be a “currency exchange,” so to speak, with an accompanying transaction fee. Changing money was a very profitable business which resulted in major fraud and corruption. It is no wonder Jesus turned over tables and made a whip of chords, saying, “Take these things away; do not make My Father’s house a house of trade.” (-John 2:16)

The money-changers made God’s house a place for thieves – a den of corruption.

Friend, what have you made of God’s house?

If we take an honest look at the numbers, many Christians today have made it an option. No longer is Church attendance a priority; it has turned into just another “activity” instead of a staple in our week.

If we are transparent with ourselves, we’ve made it into a place where we can have control and power. Countless churches have families and individuals who “control” the church (maybe because they give the most money or have been in the Church the longest). Over the years, these people have chased many pastors and other families away because those Christians threaten their “power.”

In fact, some churches today would vote Jesus out of their church and have a potluck afterward.

Friend, when we choose to be lukewarm, we not only bear no fruit, we also surrender the territory to Satan. God has given us a task to be salt and light and to be His witnesses across the street, across the states and across the sea. The late preacher Adrian Rogers once said, “Life is too short, eternity is too long, souls are too precious, the Gospel is too wonderful— for us to sleep through it all.”

May we wake up, repent and take back what is rightfully God’s.