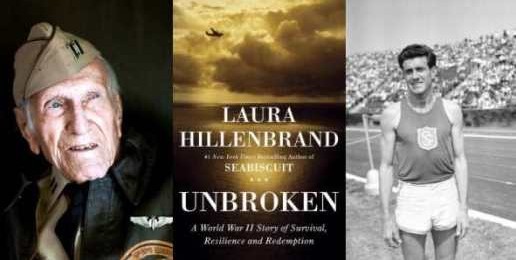 There are a number of Americans of which every young boy and girl should learn. George Washington, Abigail Adams, Sam Houston, Frederick Douglass, Theodore Roosevelt, and Louis Zamperini. Zamperini (or “Zamp” to his friends) first achieved celebrity as track athlete in the 1932 Berlin Olympics. A head-strong young boy from Torrance, California, Zamp came out of nowhere to place 8th overall in the 5,000m event.

In 1943, as 2nd Lieutenant in the United States Air Force, his bombardier was shot down over the Pacific, more than 800 miles away from Hawaii. The survivors of the crash drifted in their survival raft for 47 days, battling hungry sharks and starvation to eventually land on the Marshall Islands. The Japanese captured them and imprisoned Zamp in a series of increasingly oppressive P.O.W. camps until the camps were eventually liberated and Zamperini returned home as a hero.

Do we belong to the same country which spawned Louie Zamperini? Some days it is hard to tell. By that I mean, think about some of the Americans who have accomplished the most memorable feats over the past 20 years. Lance Armstrong, won seven Tour de France titles and beat testicular cancer—admitted to a doping scheme, stripped of his titles. Barry Bonds, hit 762 home-runs in his career—allegedly used a cocktail of performance-enhancing drugs during his career. Michael Phelps, won 18 Olympic gold medals during his career—has been caught hitting a bong and driving-drunk, suspended from all swimming competitions.

These three men have scaled the zenith of American achievement over the past 20 years. Yes, to some degree they are cherry-picked, since there have been other Americans who accomplished great things (Cal Ripken Jr, Nik Wallenda, etc.), but the fact that three of the most accomplished Americans in recent memory are a) athletes and b) of dubious character proves that our concept of remarkable has changed dramatically.

Do we still have true American heroes?

Or are we left with talented athletes as our best and brightest?

We absolutely do have true American heroes. They are all around us. Sadly we usually don’t know their names, or the particularities of the Hell they went through on our behalf, because they are often reticent to speak about their service. The Armed Forces of the United States of America are hero factories. They prepare the best of us to protect the rest of us. Even today, while these institutions are under attack by an effeminate administration which finds itself threatened by their selfless heroics and ruthless efficiency in the face of evil, even today there are still young men and women lining up to serve their country.

So why doesn’t valor engender celebrity in 21st-century America? For a number of reasons, the first being that we have become a cynical people who are motivated primarily by self-gratification and sensual pleasures. Much like a citizen in the late Roman Empire, honor has ceased to be the goal. We would prefer to experience the latest salacious indulgence than think about self-sacrifice.

Another reason is that the prevalence of moral relativism has watered down the potency of concepts like valor and honor in this country. As more people come to believe that there are no moral absolutes, they put little stock in those who live their lives as paragons of those absolutes. The average college student, who thinks that we each create our own morality, cannot accept the integrity of a man who believes so strongly in living honorably that he would give up his life to prevent Evil from achieving success. The terms Good and Evil are meaningless to this poor, befuddled student and so he is left unable to understand or appreciate the heroic individuals in our midst.

The exciting thing is that this Christmas Season, not one, but two films which depict true stories of valor, honor, and indomitable will, open nationwide. Unbroken, directed by Angelina Jolie, and American Sniper, directed by Clint Eastwood, tell the true stories of Louis Zamperini and Chris Kyle, respectively. While I have no clue yet how faithful these films will be to their source material, and the real lives on which that material was based, we have a rare opportunity to enjoy tales of American valor and skill on a scale not seen more than once or twice in a generation. The lessons these men can teach through the example of the lives they led are desperately needed today in America.

Unless we desire the fate of the late Roman Empire, we must recalibrate our concept of remarkable and once again seek the noble and honorable as our celebrities. Not for their athletic prowess, but for their intestinal fortitude and unbreakable will.

The first great challenge of my life was when, as a kid, I made the transition from a dissipated teenager to a dedicated athlete. Another was staying alive for forty-seven days after my plane crashed, then surviving prison camp. The best way to meet any challenge is to be prepared for it. All athletes want to win, but in a raft, in a war, you must win. Luckily, and wisely, I was prepared—and I did win.  ~Louis Zamperini