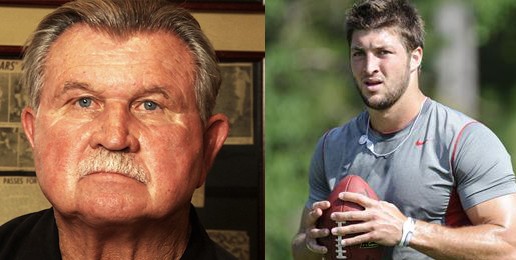 I have an orange and blue tie that I like to wear, but being an Indianapolis Colts fan, it never entered my mind that it matched the colors of the Chicago Bears until some Bears fans at my church ruined it for me with that information a while back.  However, today I am a Bears fan, too.

Here’s why.  The legendary former Chicago Bears coach Mike Ditka was recently on a sports radio show in which the host brought up the Eagles recent hiring of the well known Christian, Tim Tebow, in the preseason and giving him another shot in the NFL as a quarterback.  The host apparently thought he might get the burly coach to dismiss this as a foolhardy move. The reaction he got from Ditka was probably not what he expected.

Coach Ditka:  “You see, now you’re talking to the wrong guy. If I were coaching in the NFL today, I’d acquire Tim Tebow, and find a place to use him in certain situations on my football team. Guys like Tim Tebow are good for sports, good for football and good for our country.  He’s got character and you can’t buy character.  A lot of people act like they have it, but they don’t have it when it comes down to the nitty gritty.”

Radio Host:   “Well I’m a Tebow fan too, and I agree with you on the character standpoint but it’s kind of hard to find a spot for character on a 46-man active roster, unless the guy can contribute.  That’s sort of where the rub is don’t you think?”

Coach Ditka:  “There’s always a place on your football team for character. You’re going to have a lot of spots where you don’t have that character, so you better have enough that you can overlap it.

I am not saying you can win a championship with a guy who is a marginal passer, but again, I think he has the talent . . . It is not a popularity contest, guys. There are always guys we like or don’t like, I understand that, but when you start disliking people for the wrong reasons you’ve got the real problem.