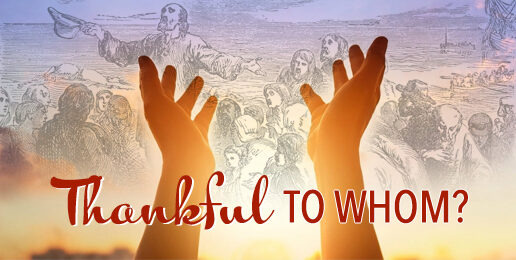 The thought struck me again recently that our nation really does not understand the religious implications of Thanksgiving, which may explain why saying “Merry Christmas” can be controversial but saying “Happy Thanksgiving” is not. Whom are we thanking?

Eric Metaxas shared a few quotes regarding the peculiar view many Americans seem to have of Thanksgiving:

“It must be an odd feeling to be thankful to nobody in particular. … It’s a little like being married in general.”
~Cornelius Plantinga, Jr.

“The worst moment for the atheist is when he is really thankful and has nobody to thank.”
~Dante Rossetti

We are aware that Thanksgiving is an important theme in Scripture. “Giving thanks” or “thanksgiving” is mentioned about 140 times in Scripture, but only a few that directly speak about our Lord and giving thanks. Therefore, the passages we do have are significant. It is especially in the person and work of Jesus that we are directed in our duty of giving thanks.

Consider two examples found in the New Testament, the first from Matthew:

At that time Jesus declared, “I thank you, Father, Lord of heaven and earth, that you have hidden these things from the wise and understanding and revealed them to little children; yes, Father, for such was your gracious will. All things have been handed over to me by my Father, and no one knows the Son except the Father, and no one knows the Father except the Son and anyone to whom the Son chooses to reveal him. Come to me, all who labor and are heavy laden, and I will give you rest. ~Matthew 11:25-28

This is a humbling passage because those of us who have been given the greatest of gifts know it is not because of who we are. As John Calvin has expressed, God has chosen the dregs and offscourings of the common people, not the high and mighty or deserving.

Giving thanks should always be an act of humility before God. If your eyes have been opened and your heart has been changed by the truth, then you have the greatest reason to be thankful and humble before our Triune God.

The second passage comes from the institution of the Lord’s Supper:

And he took bread, and when he had given thanks, he broke it and gave it to them, saying, “This is my body, which is given for you. Do this in remembrance of me.” ~Luke 22:19

We notice there is a pattern of verbs: took, given thanks, broke, and gave that matches Matthew 15 and the miracle of the multiplication of the bread and fish. Jesus was also following the common liturgy of the Passover celebration, looking back to the great deliverance provided by the Lord some 1400 years earlier.

The great change in language is what we see in the second half of verse 19 and also of verse 20.

This is my body, which is given for you. Do this in remembrance of me.

This cup that is poured out for you is the new covenant in my blood.

These words reveal the true foundation for our thanksgiving. All of God’s gifts are connected to his works of creation and redemption. If God took away all of our earthly blessings, we would still have the greatest reason to be thankful. This feeling of thankfulness does not come naturally of course. But truth, thankfully, does not depend on feeling.

And so for every Christian it can be said that you have the greatest reason of all people to be truly thankful: God’s sovereignty, his provision for all your needs, answered prayer, and the body and blood of Jesus Christ.