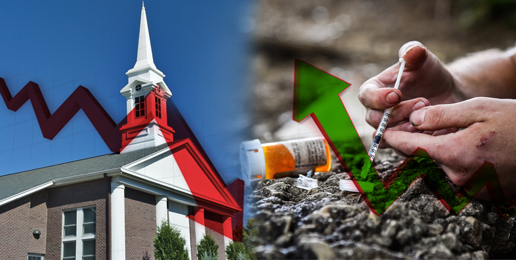 The Decline in Religious Faith is Having a Role in Nation’s Drug Crisis
Written By Micah Clark   |   10.11.19
PRINT

In the latest Gallup survey, only 46 percent of Americans think that religion can answer today’s problems, but the reality is that religion provides answers for one of today’s biggest problems—addiction.   This finding should not be a surprise.  With fewer Americans, particularly the young, affiliated with religion today, there is less experience with faith and its positive impacts.

Adolescents who frequently attend religious services, who are involved in faith-based activities, and who place a high value on spirituality exhibit greater resilience when facing the stressors that can lead to the use of drugs or alcohol as a coping mechanism.

The decline in religious activity, particularly among the young, is a remedy to those who are at the highest risk for a substance disorder.

Read more about this HERE.

A Challenge to Pro-Life Voters