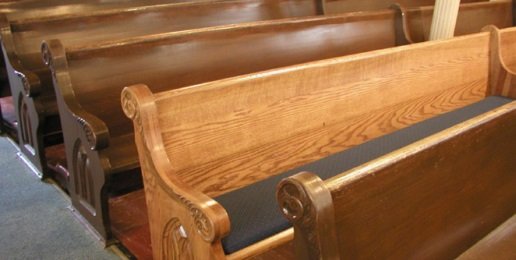 In a new study published by the research organization Barna Group, church attendance trends around the country were analyzed:

A trusted measure of religiosity over the decades has been church attendance and, for the most part, Americans are attending church less. But those shifts have occurred in varying ways and at different rates throughout the diverse regions and cities across the country.

Based on Barna’s most recent data, almost four in 10 (38%) Americans are active churchgoers, slightly more (43%) are unchurched, and around one-third (34%) are dechurched.

It probably comes as no surprise that four of the top five most “churched” cities in America are found in the South. Salt Lake City, Utah rounds out the list.

Many Christians and other supporters of the Judeo-Christian ethic understand that the rate of church attendance impacts our country and our culture. The bad news is that, as professor Carson Holloway writes at the Heritage Foundation, “In recent years, Americans have lost sight of religion’s positive contribution to creating and sustaining our democracy.”

The American Founders, Holloway writes, “intended to institute a secular government but insisted that it required a religious foundation”:

For example, in his Farewell Address, George Washington reminded his countrymen that “religion and morality” are the “firmest props of the duties of men and citizens” and therefore are “indispensable supports” of “the dispositions and habits which lead to political prosperity.” He added, moreover, that morality depends on religion: “[R]eason and experience both forbid us to expect that national morality can prevail in exclusion of religious principle.” Religion, he thus suggested, is necessary to the preservation of “free government.”

“In seeking to renew our understanding of religion’s contribution to freedom,” Holloway writes, “we can turn to no better teacher than [19th century writer] Alexis de Tocqueville.”

Tocqueville explained more thoroughly than anyone else why religion, though in some ways a pre-modern and pre-democratic phenomenon, is nevertheless essential to the health of modern democracy. This is one of the key themes of his monumental study, Democracy in America.

Moreover, religion is necessary not only to democracy’s emergence, but also to its preservation. Democracy fosters intellectual and moral habits that can be deadly to freedom: the tyranny of the majority, individualism, materialism, and democratic despotism. American Christianity acts as a corrective to these perilous democratic tendencies.

Here is Holloway taking it a step further:

Accordingly, Tocqueville concludes, the preservation of America’s traditional religion is one of the most important tasks of democratic statesmanship. Indeed, he goes so far as to say that religion “should be considered the first” of America’s “political institutions” and even that it is necessary for Americans to “maintain Christianity…at all cost.”

Holloway then makes the point that is unfortunately backed up by the Barna study:

Holloway then makes another key argument:

These changes, however, do not render Tocqueville’s account irrelevant. He wrote not as a religious teacher aiming to propagate a particular faith, but instead as a political analyst interested in the kind of religious beliefs necessary to uphold freedom and democracy. Moreover, Tocqueville saw democracy’s dynamism and understood its tendency to change the country’s religious landscape.

Accordingly, Tocqueville wrote not with a view to preserving completely intact a particular religion, but instead to discover the religious essentials of the free society and to explain how and to what extent they can be preserved. His thought therefore invites us not to a fruitless nostalgia for an unrecoverable past, but instead to an intelligent application of the lessons of the past to the obligations of the present—especially our obligation to preserve and pass on the free society that we have inherited.

There are many reasons people don’t attend church — chief among them is that our churches are filled with sinners. However, we are told that we should not forsake “the assembling of ourselves together” in Hebrews 10:25. Fellowship, encouragement, burden sharing and serving one another can only be done in community.

In short, church attendance is a blessing to you, your family and to other members of the flock. Don’t let any excuses stand in the way of becoming a regular part of Christian fellowship.