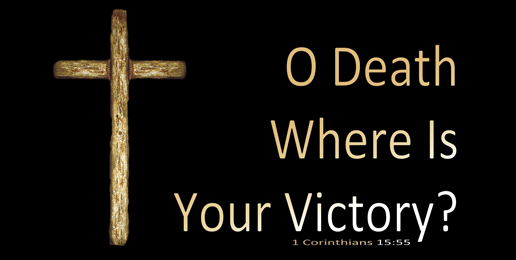 I have bad news: I’m dying. I have worse news: so are you. Whether sick or healthy, young or old, Christian or not, conservative or liberal, democrat or republican, each of us has an inevitable date with the moment in which we will depart this world. Most of us have a bit of trouble with this. In fact, of all the things that scare us, for most, death is the ultimate terror.

As the book of Genesis reveals, it was not supposed to be this way. Death was not part of the picture “in the beginning.” We were always supposed to live forever in glorious and perfect splendor with our Creator. To live “happily ever after” is the fitting ending to so many fairy tales—and movies, TV shows, novels, and the like—because this is the way things are supposed to be.

Death was the tragic consequence of wanting to rule our own world. But thanks to the sacrifice of Jesus and His resurrection, death does not have the final say in the lives of those who have put their trust and hope in the One who died for our sins, and who was raised to life on the third day. As one scans history, no other date put such a mark in time as when Jesus Christ shed His grave-clothes and departed the tomb.

Of all the religions of the world, only Christianity claims an empty tomb for its founder. The physical resurrection of Jesus is the cornerstone of Christianity. British theologian Michael Green said it well when he noted, “Without faith in the resurrection there would be no Christianity at all.” Noted biblical scholar, professor, and author Wilbur M. Smith said that, “The resurrection of Christ is the very citadel of the Christian faith. This is the doctrine that turned the world upside down…” Indeed it did.

The transformation of the disciples of Jesus is one of the greatest evidences of His resurrection. For decades following Jesus’ death and resurrection they preached His “good news.” Biblical references and strong extra-biblical sources have almost all of the disciples dying martyrs’ deaths. James, the son of Zebedee, according to Scripture was, “put to death by the sword (probably beheaded).” According to early church historians Peter was crucified in Rome, and Paul (of course not one of the original 12, but an apostle nonetheless) was beheaded there. Strong church tradition has Thomas, the “doubting” disciple, being run through with a spear.

The faith of Jesus’ Apostles spread to thousands upon thousands in a relatively short period of time. As the “good news” of Jesus spread, many of the early believers suffered intense persecution. Fulton Oursler, in The Greatest Faith Ever Known, notes that “Thousands of these men and women would die themselves in the arena, burning on pitch-soaked pyres, crucified, they would die for Jesus Christ, and for the Faith, the Church that Christ founded.”

The persecution of the church continued for centuries. Nevertheless, Christianity endured, and the number of Jesus’ followers continued to multiply. After Constantine’s conversion in the year 312 the church passed from persecution to privilege. Councils were called, the Scriptures were translated into various languages, and faithful missionaries carried the gospel to ever farther reaches of the world.

The world’s first university, birthed in 1088, was The University of Bologna in Italy. It was founded to teach canon law. The second oldest university, The University of Paris, grew out of the cathedral schools of Notre-Dame and soon became a great center for Christian orthodox studies. Dr. Alvin J. Schmidt, in his book Under the Influence: How Christianity Transformed Civilization, points out that every college established in colonial America, except the University of Pennsylvania, was founded by some denomination of Christianity. He adds that, preceding the Civil War, 92 percent of the 182 colleges and universities in the U.S. were established by some branch of the church.

By around 1450, Johannes Gutenberg had nearly perfected his printing press. Making use of movable metal type, Gutenberg’s press was the world’s most efficient means of large-scale printing. This process of printing remained virtually unchanged for four centuries. The first major work mass-produced on Gutenberg’s press was the 42-line Bible (or “The Gutenberg Bible”). This magnificent work ushered in the age of the printed book, and the era of mass communication. Soon, millions of homes, schools, and churches had their own copies of God’s Word, and news of the resurrection of Jesus now spread faster than ever before.

Many of the greatest artists in history—Rembrandt, Michelangelo, Donatello, Da Vinci, Salvador Dali—were followers of Jesus. This is evident in that many of the great works they produced were scenes or characters from Scripture. Beethoven, considered by many to be the world’s greatest composer, wrote some of the most profound Christian masterpieces of history. Johann Sebastian Bach was, as one scholar put it, indeed “a Christian who lived with the Bible.”

Some of the most famous and influential founders of what is considered “modern science”—Galileo, Kepler, Newton, and Pasteur—were Christians who operated from a strict biblical worldview. For example, in 1595, in Kepler’s first major work, he thought that he had discovered “God’s geometrical plan for the universe.” As a Christian, Kepler believed that the universe was designed by a Creator and thus should function in a very logical fashion. He went as far as to define his view of “science” as “thinking God’s thoughts after Him.”

Isaac Newton is considered by many to be the greatest scientist who ever lived. He is most famous for his laws of motion and universal gravitation. On gravitation he noted that, “Gravity explains the motions of the planets, but it cannot explain who set the planets in motion. God governs all things and knows all that is or can be done.”

Recognizing that “The earth is the Lord’s, and everything in it…” and knowing that we are merely stewards of the Creator of all things, those who follow Jesus are the most generous people on the earth. Take note of the number of influential charities inspired by Christianity. Among them are The Salvation Army, Campus Crusade, Feeding America, Catholic Charities, Compassion International, Samaritan’s Purse, St. Jude Children’s Hospital, Habitat for Humanity, World Vision, and the YMCA.

This great nation—the miraculous United States of America—that we inhabit was founded almost exclusively by Christians and upon Christian principles. On July 4, 1837, in a speech delivered in the town of Newburyport Massachusetts, John Quincy Adams, son of John Adams, and the 6th U.S. President, proclaimed,

The impact of Christ’s resurrection can be seen in individuals and institutions, in art and entertainment, in science and industry, in calendars and carols, in tribes and in nations. All of human history—from Creation to Christmas to the Crucifixion—culminates in Jesus leaving His earthly tomb. As I implied earlier, and as history clearly reveals, the resurrection of Jesus stands aloft every other event the world has ever known. Again, virtually every facet of our lives has been impacted by the empty tomb left by Jesus. Though we may acknowledge Him on our currency, and measure our years from His birth, our only real hope is in His resurrection. In the end, the only things that will matter, the only things that will be truly lasting and good, are the things we did in His name.

This article was originally published at TrevorGrantThomas.com
Trevor is the author of the The Miracle and Magnificence of America