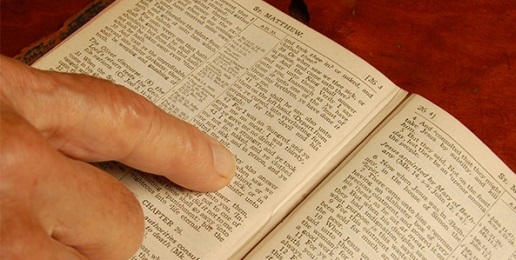 One of the sharpest criticisms that comes against Bible-quoting, conservative Christians is that we are hypocrites, failing to live by the very book that we so zealously quote.

Sadly, that criticism is often true.

To give just one example (and as I’ve said countless times), no-fault, heterosexual divorce in the evangelical church has done more to undermine marriage than all gay activists combined.

But we conservative believers hardly have a monopoly on hypocrisy. To the contrary, the Bible-quoting hypocrisy of the liberal left is far more galling than our conservative Christian hypocrisy. We, for our part, truly believe the Bible to be God’s Word and seek to live by it (even though failingly so at times), whereas the liberal left often despises the authority of Scripture except for a few select passages that it misuses for its purposes.

This has come into glaring clarity in light of the president’s executive order concerning refugees. Suddenly, Hollywood elites and their liberal colleagues are quoting the same book that they openly mock, especially when it comes to moral and spiritual standards.

They can’t have it both ways.

A critic might say, “But you do the exact same thing. You pick and choose what verses you follow.”

Actually, that’s not the case. We have a grid through which we read the Bible – a grid given us by the Bible itself – and we use the Scriptures to interpret the Scriptures.

For example, we learn that God gave Israel certain laws to keep them separate from the nations, even though the laws were not based on moral absolutes. A good example would be, “Don’t wear garments with mixed fabric” (Leviticus 19:19; Deuteronomy 22:11), even though there is nothing morally wrong about doing so. It was simply wrong for Israel because God was teaching them to be separate from the other nations.

On the flip side, when the Ten Commandments say, “Do not murder,” it is based on an absolute moral prohibition, one that is binding for all people everywhere.

The left-wing, hypocritical Bible-quoters, have no such grid. Instead, they learn a few verses (or, snippets of verses) and quote them with smug self-assurance, not realizing that the book they are selectively quoting actually condemns the lives they are living

For a number of years, their favorite verse has been, “Jesus said ‘Don’t judge,’ but you’re guilty of judging me!” – and they say this as they harshly judge us.

What they fail to realize is that Jesus was teaching us not to judge superficially or hypocritically and not to condemn so that we could judge righteously rather than by superficial appearances (see Matthew 7:1-6; John 7:24).

And this same Jesus often warned about hell fire, taught that the path to God was narrow and straight, stated that He was the only way to the heavenly Father, and made clear that those who rejected Him would die in their sins – among many other exclusionary and flesh-offending statements. As for the moral standards of the Law – including sexual standards – He took them to a higher level.

To the Bible-citing Hollywood elites and your ultra-liberal colleagues, are you sure you want to be quoting the words of Jesus?

But the hypocrisy has gotten worse after President Trump’s executive order putting a temporary halt on incoming refugees from seven Middle Eastern countries. These one-time Bible-mockers are now quoting the words of the Torah in the Old Testament – yes, those supposedly antiquated, misogynist, bigoted words – reminding us of Israel’s calling to care for the refugee and the foreigner in their midst.

Of course, I totally affirm this ethic and call, and since we are a nation of immigrants, it applies all the more to us, just as it applied especially to the people of Israel, who themselves had been mistreated when they lived in Egypt: Don’t do to the foreigners what Egypt did to you!

But let’s put this compassionate command in context. The ancient Israelites were first commanded to exterminate the Canaanites who lived in the land they were about to inherit – including men, women, and children – because the spiritual and moral wickedness of the Canaanites was so great that it would pollute and destroy the Israelites should any survive.

That’s what I call extreme, yet it was a one-time command for ancient Israel, only after God waited 400 years until the wickedness of the Canaanites reached horrific proportions (see Genesis 15:16).

Not only so, but the non-hostile foreigners who took refuge in Israel were required to assimilate into Israel’s culture and were expected to live by Israel’s laws (see, e.g., Numbers 15:29). Is that a standard we’re ready to apply here as well?

More galling still is the liberal left’s quotation of Torah law pertaining to care for the refugee while ignoring the Torah’s strict moral code, which universally forbade homosexual practice and adultery under penalty of death.

For the record, these prohibitions are upheld by the New Testament (both by Jesus and Paul), the difference being that instead of a physical death penalty there is a penalty of spiritual death, which in many ways is far worse.

The bottom line, then, is simple: By all means, keep quoting the Scriptures and calling America to live by the morality of the Bible. Just don’t do it selectively.

And the next time conservative Christians do the same, don’t yell back at us, “Separation of church and state!”