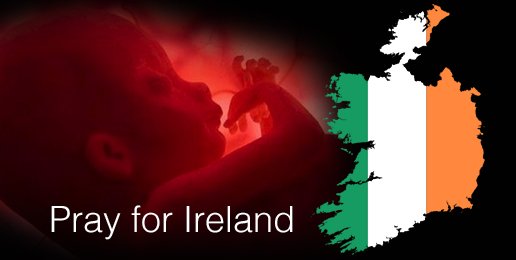 On May 25, 2018 there is a very important referendum taking place in the Republic of Ireland (pop. 4.68 million people). The referendum is over whether the Eighth Amendment, which recognizes the right to life of the unborn child, will be repealed or remain as law. The Eighth Amendment was passed in 1983 with 67% support. In 2013, legislation was passed which allowed for abortions if the mother’s life was immediately threatened. This included suicide.

As you can image tremendous pressure is being brought by anti-life forces on the Republic of Ireland. The law is called misogynistic. The foolish argument that banning abortion does not stop all abortions is also being used. The Irish government has proposed legislation that would legalize abortion up the 12th week of pregnancy. Somehow the humanity of the unborn child changes after twelve weeks. Sadly it is estimated that 150,000 women have travelled outside Ireland for abortions since the 8th Amendment became law.

Would you be in prayer for the country of Ireland that this law would remain in place? Let us pray also for the advancement of the gospel in Ireland. Good laws are necessary, but only the gospel of Jesus Christ can truly change hearts. Let us also pray against the efforts of many in government and entertainment who are seeking this law to be overturned. May their lies be stopped. May God’s people be bold in proclaiming God’s truth.

Would you also encourage others to be in prayer? Maybe you could help organize a time in your church sometime before this vote. Our church is going to have a special time of prayer on Wednesday, May 23. Let us be in prayer and do what we can to support the promotion of life in Ireland.