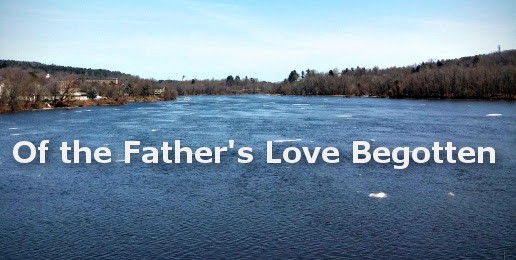 I am proud of my wife, Paulie.  She started young loving Jesus.  She gave her heart to Him when she was seven years old.  Her mother guided her to the foot of the cross.  And there she has remained.

Paulie’s most recent song is titled Of the Father’s Love Begotten.  It is an ancient hymn that she discovered.  She appreciated the words, and worked with Peter Vantine to create an original arrangement.

The hymn is a christmas carol that is based on a poem written by the roman writer Aurelius Prudentius.  He lived in the latter half of the third century AD.  After practicing law he retired to an ascetic life.

According to wikipedia his poetry is “influenced by early Christian authors, such as Tertullian and St. Ambrose, as well as the Bible and the acts of the martyrs.”

While all the verses of the hymn are worthy of thought and meditation, this stanza tickled my fancy this morning.

Righteous judge of souls departed, righteous King of them that live,

On the Father’s throne exalted none in might with Thee may strive;

Who at last in vengeance coming

Sinners from Thy face shalt drive, evermore and evermore!

It is comforting to realize that Christians have a King.  He is our loving heavenly Father.  And He has a son.  His name is Jesus Christ.  And these sent the third person of the trinity to dwell within us.  He is the Holy Spirit who empowers us.

We don’t elect this King.  He existed before elections, republics and nations.  As Prudentius observes, “On the Father’s throne exalted none in might with Thee may strive.”

In a couple weeks Paulie and I will fall on our faces and pray in front of America’s Supreme Court building in Washington D.C.  We won’t be there appealing to the nine judges who make up the court.  We are going to pray to the righteous judge of souls departed.  The righteous King of them that live.

America imagines that, in her might, she can prevail over this King, over God.  But our power is nothing.  It is not a matter of winning or losing.  It isn’t even possible to strive with this King.  This fight with God, this attempt to redefine marriage, is a figment of our imagination.  God isn’t even fighting.

And the answer to the oft-repeated question by all people of good will who ponder the trajectory of “gay” rights — “What’s next?” — is:

Who at last in vengeance coming

Sinners from Thy face shalt drive, evermore and evermore!

Our King will bring an end to the insanity.  Fathers don’t marry sons in the Kingdom of God.   And museums don’t honor perversion.  The heavenly kingdom makes sense.  Insanity is banished.

Paulie has written and produced over fifty songs.  We LOVE to give her music away.  We want to be  a blessing.  We want to build up your most holy faith.

Check out her music today.  Visit her online at www.paulieheath.com