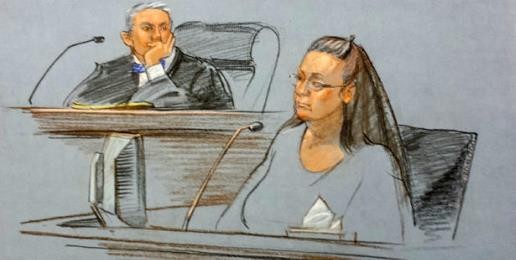 Until her release [last week], Kim Davis, the clerk of rural Rowan County, Kentucky, was confined to a jail cell because she refused to issue marriage licenses over her name to same-sex couples. She has been pilloried in the media for “lawlessness” and compared not to Martin Luther King Jr. for her civil disobedience but to Governor George Wallace of Alabama. Michael Keegen of the grossly misnamed People for the American Way called her actions an “abuse of power” and proposed instead that she should “find another line of work” — that is, resign her elected office — if she “can’t in good conscience fulfill [her] duties.”

The double standard on display is palpable. I don’t recall Keegen or any of the other self-righteous, newfound devotees of the rule of law calling for the resignation of Kentucky’s attorney general when he refused to defend his state’s marriage law — or any of the other state attorneys general who did the same, from California’s Jerry Brown to Pennsylvania’s Kathleen Kane, and several others, including perhaps most notoriously Oregon’s Ellen Rosenblum, who was caught actively colluding with plaintiffs to ensure judicial invalidation of the Oregon marriage law she disliked.

“But Davis was refusing to comply with a decision of the Supreme Court,” it will be argued. So, too, did all those illustrious attorneys general. All of them refused to do their duty and defend their state’s man-woman marriage laws, even though the binding precedent of the U.S. Supreme Court at that time, a 1972 case called Baker v. Nelson, was that such laws were constitutionally valid.

Ms. Davis’s position has also been mischaracterized as asserting that because the U.S. Supreme Court’s decision is contrary to God’s authority, she cannot be compelled to comply with it and therefore can prevent same-sex couples from getting married in her county. Her position — so described — has been belittled by simpletons across the political spectrum as nothing more than the misguided stance of a crazy evangelical clinging to her Bible. But that is not her legal argument at all (however much merit it might have as a reaction to an illegitimate decision by the U.S. Supreme Court). Her actual argument is much more restrained.

Kentucky has a Religious Freedom Restoration Act, which expressly prevents the government from imposing a substantial burden on someone’s religious beliefs unless the government’s mandate is narrowly tailored to further a compelling governmental interest. Because this lawsuit is pending in federal court, the federal Religious Freedom Restoration Act, which contains the same protection, is also applicable. Ms. Davis’s lawyers have simply argued that these federal and state laws require that her religious objection to issuing same-sex “marriage” licenses over her own name be accommodated.

There is no compelling interest here. Even assuming the validity of the U.S. Supreme Court’s decision holding that right to same-sex “marriage” is a fundamental right, no one is being denied the right to marry. As a matter of Kentucky law, the couples seeking to compel Ms. Davis herself to issue them a marriage license can obtain a marriage license from any other county in Kentucky. They can also get one from the county executive of Rowan County. And if the governor would simply call the legislature into special session to deal with the problem that has arisen since the U.S. Supreme Court’s decision in June, it would likely even be possible for other clerks in Ms. Davis’s office to issue a marriage license without its being issued on Ms. Davis’s authority (the legislature could simply remove the problematic “under [her] authority” language from the statewide uniform form), or for marriage licenses to be obtained via a statewide online system.

But none of those options would accomplish what the same-sex couple and its chorus of advocates are really after, which is not the “marriage” but forcing Ms. Davis and everyone like her to bow to the new, unholy orthodoxy. In other words, this controversy has all the hallmarks of the one that engulfed Thomas More, who silently acquiesced in but would not condone King Henry VIII’s illicit marriage.

The Religious Freedom Restoration Acts, both the federal law and Kentucky’s version of it, required that Ms. Davis’s religious objection be accommodated as a matter of law. The federal court’s refusal to respect those laws is where the real lawlessness lies in this case. And of course, that lawlessness is quite apart from the not insignificant question of whether the U.S. Supreme Court’s Obergefell decision is itself lawless. Such claims did not originate with Ms. Davis, but with the four U.S. Supreme Court Justices who stridently dissented from Justice Kennedy’s diktat, calling it “illegitima[te],” “indefensible,” “dangerous for the rule of law,” “demeaning to the democratic process,” “a naked judicial claim to legislative — indeed, super-legislative — power,” “pretentious,” “egotistic,” a “judicial Putsch,” “deeply misguided,” a “usurp[ation of] the constitutional right of the people,” a “perhaps irremediable corruption of our legal culture’s conception of constitutional interpretation,” and an “extravagant conception of judicial supremacy.”

Reacting to a similar piece of judicial tyranny in the Dred Scott case, Abraham Lincoln famously said, in his first inaugural address, that although judicial decisions are binding on the specific parties to a case, “the candid citizen must confess that if the policy of the Government upon vital questions affecting the whole people is to be irrevocably fixed by decisions of the Supreme Court, the instant they are made in ordinary litigation between parties in personal actions, the people will have ceased to be their own rulers, having to that extent practically resigned their Government into the hands of that eminent tribunal.”

In short, Ms. Davis was much more faithful to her oath of office, and to the Constitution she vowed to support, than the federal judge who jailed her for contempt, the attorney general of the state who refused to defend Kentucky’s laws, and Justice Anthony Kennedy, who usurped the authority of the states and the more than 50 million voters who had recently reaffirmed the natural definition of marriage, in order to impose his own more “enlightened” views on the nation. One can only hope that Ms. Davis’s simple but determined act of civil disobedience will yet ignite the kind of reaction in the American people that is necessary to oppose such lawlessness, or at the very least bring forth a national leader who will take up the argument against judicial supremacy in truly Lincolnian fashion.

This article was originally posted at the National Review Online.

— John C. Eastman is the Henry Salvatori Professor of Law and Community Service, and former dean, at Chapman University’s Dale E. Fowler School of Law. He is also the founding director of the Claremont Institute’s Center for Constitutional Jurisprudence and chairman of the board of the National Organization for Marriage.

The Almighty and Abortion

The Mississippi Compromise of 2022
b
a
x
r