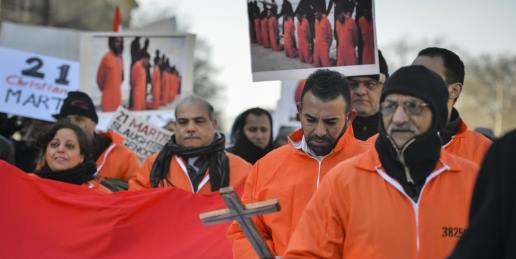 It’s Time for American Christians to Stand With the Persecuted
Written By Fran Eaton   |   04.22.15
PRINT

Over this past weekend, Christians were shot and killed, beheaded and drowned because they refused to abandon their faith in the face of venom-filled Muslim jihadists.

In one case, twelve Christians were thrown overboard to their deaths in the Mediterranean when a young Nigerian Christian refused to stop praying to God for help when the rubber boat began to sink. Witnesses said Nigerian Muslims on the dinghy “went mad” and began screaming “Allah is great” before they threw the Christians to their deaths. The remaining Christians formed a human chain and protected themselves against the attackers by clinging to the dinghy, the Daily Mail reports.

On Sunday, the Islamic State released a video of ISIS jihadists killing thirty Ethiopian Christians in Libya. The video shows about 15 men being beheaded on a Mediterranean beach and another group of the same size being shot in their heads somewhere in the Libyan desert.

The video referred to both groups of martyrs as “worshipers of the cross belonging to the hostile Ethiopian church,” the Jerusalem Post reports.

In February, 21 Egyptian Coptic Christians were beheaded in Libya.

“ISIS turned up and they said to the children, ‘you say the words that you will follow Muhammad.’ The four children, all under 15, said, ‘No, we love Yashua [Jesus]. We have always loved Yashua. We have always followed Yashua. Yashua has always been with us,'” White recalled.

“[The militants] said, ‘say the words!’ [The children] said, ‘no, we can’t do that.’ They chopped all their heads off,” White told the Christian Post.

And then there is Pastor Saeed Abedini, who has been imprisoned in Iran for nearly two-and-a-half years, shaken when six of his fellow prisoners were executed in early March. Pastor Saeed is accused of proselytizing Muslims to Christianity and being involved in underground church activities that “endanger Iran’s national security.”

Were any of these tragedies a reason for pause and prayer when you freely met with other Christians to worship or study God’s Word this weekend?

“Remember them that are in bonds, as bound with them;
and them which suffer adversity, as being yourselves also in the body.”

As the Church, are we doing that?

Naive skeptics say what ISIS jihadists do across the world is no threat to American Christians. “It will never happen here,” they say, sighing that only the hysterical and paranoid believe anyone will suffer for their faith in America.

But Jewish-American writer Elie Wiesel isn’t so sure. During his 1985 acceptance speech after being awarded the Nobel Peace Prize, Wiesel shared a conversation he had with a young Jewish boy that asked him how the Holocaust could have happened.

“… I explained to him how naïve we were, that the world did know and remained silent. And that is why I swore never to be silent whenever and wherever human beings endure suffering and humiliation,” Wiesel said.

“We must always take sides. Neutrality helps the oppressor, never the victim. Silence encourages the tormentor, never the tormented. Sometimes we must interfere. When human lives are endangered, when human dignity is in jeopardy, national borders and sensitivities become irrelevant. Wherever men or women are persecuted because of their race, religion, or political views, that place must — at that moment — become the center of the universe.”

“The center of the universe …”

Not pleasant thoughts to have on a bright, sunny Sunday morning, though, are they?

American Christians must not remain silent about what our Christian brothers are enduring. Our own religious freedoms are already being eroded by secularists that demand we must abandon Biblical principles and Church teachings in the public aquare. Instead, they want political correctness to prevail as a new national belief system.

History shows that when the Nazis annexed Austria in 1938, they were met with little resistance. Swastika flags waving, Austrians lined the parade route as the Nazis entered their homeland. Right away, the Nazis instituted anti-Jewish policies and banned Jewish Austrians from participating in community events.

Jewish store owners were required to publicly identify their businesses. Austrians knew they were to avoid the businesses with “Jud” painted on outside walls if they didn’t want to antagonize their Nazi rulers.

It wasn’t long after synagogues were robbed and destroyed, that Austrian Jewish resisters were killed and innocents sent to Dachau and Bechenwald death camps.  Estimates are that 65,000 Jewish Austrians perished from 1938 to 1942.

Americans were made aware of the Austrian Jews’ peril during the late 30s and early 40s, but the tragedies were overseas and surely, they had nothing to fear from Hitler’s evil plans to conquer the world.

It would never happen here, they thought. And thankfully, it did not, because Allied Forces defied the abuse. Eastern Europe became “the center of the universe” for almost a decade.

Christian American business owners are now being forced to abandon their religious beliefs if they clash with America’s national religion of political correctness. If a business owner dares to live out his faith by standing for one-man, one-woman marriage or honoring life as sacred, he makes himself vulnerable to ridicule, boycotts and even bankruptcy – simply because his religious beliefs make others uncomfortable.

A recent movement is crossing America that advocates Christians wear orange to church on Sundays to identify with the orange-jump suited Christian prisoners that ISIS has beheaded over the past several months.

It’s time for Christians in Illinois to remember those that are in bonds, as if we – as fellow believers – were imprisoned with them. We need to bear the burdens of Christian brothers and sisters that are suffering for righteousness’ sake. We need to pray earnestly for them, repent of our inattention and speak out about the atrocities.

We need to demand action from authorities that affect public policy.

It’s time for Christians to break their self-consumed silence and speak out, pray, and at the very least, don the color orange in solidarity with those suffering for righteousness’ sake – starting next Sunday.

It’s the least we can do.

“Islam in America: A Christian Perspective”
with Dr. Erwin Lutzer
May 7th