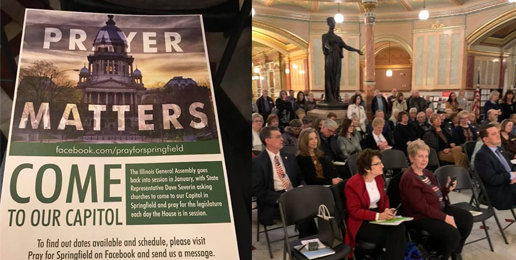 What would happen if church members from around Illinois came to Springfield and sat praying in the House gallery each time it met during the spring 2020 session? What could God do in Illinois? That’s what Illinois State Rep. Dave Severin (R-Marion) wants to find out.

Severin is inviting Christians in Illinois to visit the Pray for Springfield Facebook page to schedule a date on the Illinois House calendar to come pray in the gallery. The idea came to him when he was driving home last June following the end of the spring legislative session. The Reproductive Health Act had just been passed, giving Illinois the most progressive abortion laws in the nation.

During the lengthy committee meetings and debates prior to the Act’s passage, Severin had seen groups of women wearing red capes and white hats depicting handmaidens from the online series “The Handmaiden’s Tale,” based on Margaret Atwood’s book of the same name, sitting silent in the audience and gallery. Severin wondered, “Where are the Christians? Where is the Church?” That’s when his idea to start the Pray for Springfield Facebook page originated.

Severin describes the page as non-partisan. “It’s non-denominational,” he said. “I’m not pushing anything other than for people to come and pray for our state.”

Multiple church groups, mainly from the southern part of the state, have already signed up to sit quietly praying in the gallery for a few hours while the Illinois House is in session.

Discussing his reasons for starting the movement, Severin said, “I want to encourage Christians across the state to pray that God would turn legislators’ hearts and give them wisdom to promote things that are good and right, and that He would give people reason to come to Illinois and stay in the state.”

Pray for Springfield kicked off with a rally on January 28, the opening day of the spring legislative session in the Capitol rotunda. Severin was joined by some of his fellow lawmakers, Christian prayer groups such as Concerned Women for America, and church groups.

State Rep. Brad Halbrook (R-Shelbyville) addressed the crowd, sharing from 2 Chronicles 20 and speaking about King Jehoshaphat and the people of Judah facing vast armies: “King Jehoshaphat called the assembly to the temple and they began to call out to the Lord. The Lord said, ‘Do be afraid because the battle is yours.’ There were men appointed to sing praise to the Lord. The Lord blessed his people who stood in assembly and cried out to God.”

To the concerned Illinoisans gathered for prayer, Halbrook said, “Don’t give up, be afraid, or discouraged. The Lord will prevail in this matter. That is the great lesson here for all of us.”

He also thanked them for coming and said, “We, all of us, covet your prayers. We need them.”

Another of the Illinois House members speaking was State Rep. Darren Bailey (R-Louisville), who began by expressing his thankfulness: “I cannot think of a more privileged opportunity, a more privileged time to live in our history…to be here and serve God in this capacity as a state representative in Illinois government than now after the dark ages that we’ve been in. We’re going to see God do some great things this year, I believe that.”

In contrast to what some Christian leaders have been publicly stating, Bailey urged Christians to become more politically active. He told those gathered, “Go back to your churches, go back to your family, go back to your dinner tables, whenever people say, I don’t want to get political. Say, guess what? That’s why we are in this mess! The church has got to step up and get involved, get informed, get engaged, get out, and get busy!”

“Proverbs 28:2 tells us when there is moral rot in the nation a government topples easily,” shared Bailey, “but where there’s wise and knowledgeable leaders it brings stability. So, we need your prayers for this entire house, this entire building, this entire city, this entire state, this entire country…”

Severin, the man who started it all, was the last of the government officials to speak.

“You know who is going to turn this state around?” he shouted. “It’s not Republicans. It’s not Democrats. It’s you guys, it’s your faith and your trust in the Lord!

The rally concluded with prayer for the state of Illinois and its representatives, with calls for God to give them wisdom and for them to seek His leadership.

To learn more, go to facebook.com/prayforspringfield and consider finding a date to sign up to bring a group from your church to pray in the Illinois House gallery.