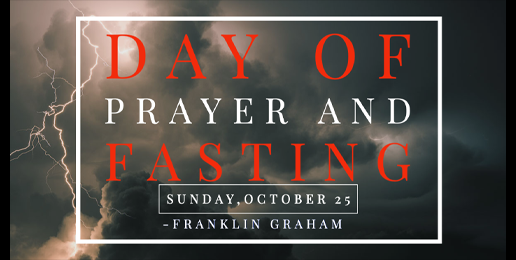 Nearly a month after calling Christians to the nation’s capital for a prayer march, Franklin Graham is calling on them again, this time to join him for a day of prayer and fasting. Graham posted to his Facebook page October 20th,

“I urge you to join me for a day of prayer and fasting for our nation on this Sunday, October 25. The upcoming election is the most important in our lifetime—with two diametrically different directions for this country on the ballot. Our only hope is in God, and we need to call out to Him for His help and intervention. Will you join me—and will you share this with others?”

A similar message went out on his Twitter page.

“Today, our nation is at a critical juncture. We need to call out to God for His help, His intervention, and His mercy. It is only by His hand that America will survive and be able to thrive again.”

Graham described how King Jehoshaphat, when the very survival of his nation was at stake, called on his people to fast. When the people turned to God, He delivered them. The story is captured in 2 Chronicles 20:3-4, “And Jehoshaphat feared, and set himself to seek the Lord, and proclaimed a fast throughout all Judah. So, Judah gathered together to ask help from the Lord; and from all the cities of Judah they came to seek the Lord.”

According to Graham, as much is at stake now as it was then. The decision is between “two vastly different directions for the future of this country. This not only affects us, but our children and our grandchildren.”

Pastor Myles Holmes of REVIVE Church in Collinsville agrees with Graham’s call to prayer and fasting, saying, “the most earth-shaking, culture-shaping interventions of God’s Holy Spirit changing our world have always been in response to the fervent, faith-filled fasting & prayer of God’s people. There is simply no other pathway to repentance, revival and restoration.”

Church of Christian Liberty Pastor Calvin Lindstrom wisely points out, “We trust not in our own prayers, but if we are not praying, then are we really trusting in the Lord? We must pray not because of who we are, but because we serve a faithful, sovereign God who does hear the prayers and cries of His people.”

Rev. Richard Valkanet, senior pastor of Living Waters Church in Grayslake reminds us that, “in times of great stress, people of God have always turned to the Lord with “fasting & prayer.” George Washington proclaimed a Day of Prayer in 1789.  Lincoln put forth a proclamation for a Day of Fasting and Prayer in March, 1863. If there ever was a day as the one we are in, it would be most appropriate for all true believers to unite, petitioning God’s divine intervention as we repent.”

“If we truly want the blessings of the Lord on our country, then we must come humbly before Him, seek His face in prayer and fasting and repentance, and ask if He might by His grace and mercy bring healing to our troubled nation.”

His “To the Point” column message paraphrased 2 Chronicles 7:14 and echoes his October 20th call. Decision is a Billy Graham Evangelistic Association publication, of which Graham serves as editor-in-chief.

The son of the late evangelist Billy Graham and CEO of Samaritan’s Purse Ministries was joined by thousands on the National Mall in Washington, D.C. for the September 26th National Prayer March. Participants in the non-political event asked God to save the country from its current situation and petitioned Him for peace. Other prayer topics included the COVID-19 pandemic and its effects, ongoing nationwide protests and rioting, and upcoming national elections.

Take ACTION: Join the IFI board of directors and staff as we intentionally fast and pray for our state and nation this Sunday. Please pray for God’s mercy on this state and on our nation. Pray for the election of God-fearing candidates to every level of government. Pray for wisdom for voters and a safe and fair election.

“Furries” Trend is a Result of the Slippery Slope

Freak Out as Conservatives Exit Public Schools
b
a
x
r