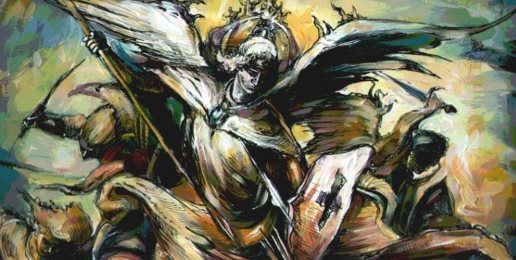 “The echo of sharp laughter from a crowd, as hammered nails pierce flesh, pierces the Bright Ones with perplexity. They see the Maker’s hands helpless against Made Wood. The bond is sealed with God’s blood, the body buried. In this is Love’s substance become darkness to their light. The Third Day sweetens the mystery. Astonished heralds now of Resurrection, they have eternity to solve it, and to praise.”
~Luci Shaw. “Accompanied by Angels”: Poems of the Incarnation

The Passion Week of Jesus Christ is the pinnacle of all history. Millions of words have been written about it, dozens of movies have offered a depiction, and it’s been a central figure for the artist for 2,000 years. Scripture is replete with its description, giving a glimpse of the crucifixion from just about everyone’s perspective. The view of the Father is alluded to in Genesis 22, the view of the Son from Psalms 22, the view of Israel from Isaiah 53, and the view of the prophets throughout the Old Testament.

The Gospels share the views of the Jews, the Romans, the disciples, Pilate, Herod, the Centurion, our Lord’s mother, his followers, Simon of Cyrene, the thieves, and many others. There is one view that we can only imagine. The view of the angels.

Satan and his angels most likely celebrated the event, not realizing the deeper meaning, as the White Witch in the Narnia Chronicles didn’t realize that the death of Aslan would be her undoing.

Forsaken by man, who couldn’t stay awake, it was an angel that appeared in Gethsemane to comfort him. Forsaken by God who robed his judgment in darkness, Jesus Christ was alone in his mortal dance with death and the grave, though I’m nearly certain that Michael the Archangel and the host of elect angels wanted desperately to act.

What do you know about angels? I don’t mean Jewish superstition from apocryphal accounts nor the imaginative personal anecdotes of the “Christian” or the spiritist. I mean, what do you know of angels from the accounts that have been given us in the Bible? Biblical cherubim and seraphim are very different from the fat babies, baring wings and bows that are pictured on Valentine cards; as are the Arch-angels unlike the scantily clad winged trinkets of Victoria’s worst kept secret.

Angels are fearsome and they are mighty: often opening their dialogues with “Fear not.” They are a higher creation than man in his current state, and they are among God’s highest creation.

Angels learn. They have volition. They have emotion. They know how to war and the bear the instruments of both worship and warfare. They deliver God’s message, encourage and minister to his servants, and will deliver his wrath. They are students.

They shouted with joy during the Creation week, amazed at the splendor of the Creator. An angel announced the birth of Jesus to a maiden and the whole host of angels heralded his birth to the shepherds. They warned his father to flee to Egypt and they comforted our Lord after his temptations by their former commander. Michael, who probably shared with Lucifer that appointment of the anointed cherub that covered the throne of the Lord, now saw his Lord mocked, his beard plucked, his face smashed, the laughing of a mongrel crowd.

What would it be like to view the passion through the eyes of an angel? Imagine Michael, who was there when our Lord laid aside crown and scepter and stepped into mud-pit earth only to be spitefully mocked with a crown of thorns. Visualize how he and the other angels must have waited, with hand to the hilt, hoping to get the command to act. Envision witnessing human history through the eyes of those who viewed it from the throne room. Beings who from their first moment of consciousness, served and worshiped our Lord only to see him drop his robe, remove his crown, and come to planet earth to be abused by a race of ingrates.

In the garden, just after Peter slashes out with a sword and cuts off the ear of Malchus; Jesus heals the ear and tells Peter to sheath his sword and says, “Think thou that I cannot now pray to my Father, and he shall presently give me more than twelve legions of angels? But how then shall the scriptures be fulfilled, that thus it must be?” (The Gospel of Matthew)

Twelve legions of angels when one angel in antiquity killed 185,000 of Assyria’s choicest warriors in a single night? Was our Lord using hyperbole? Was he talking about his own rescue from the cross or was he referring to what would have had to have taken place if he decided not to “drink of that cup”?

One day the angels will return with our Lord, overcome Satan and his fallen legions, and divide the wheat and the tares for judgment. I believe Jesus could have spoken and all of creation would have had to yield; so I think it is clear when he adds the words, “But how then shall the scriptures be fulfilled, that thus it must be,” he is talking about his substitutionary sacrifice for all of mankind. If he didn’t die in our stead, we would all be judged in that moment and there wouldn’t be any wheat to separate.

Americans think back in horror to that moment not long ago when brave men were being attacked by a wicked mob in Benghazi, Libya. We cringe that help was in the area, and our great military heroes were told to “stand down.”

The repugnant actions of our executive branch in issuing that order is only eclipsed as it is countered by the Grace of a thrice-Holy God and his Son, the willing sacrifice, when God himself issued the ultimate stand down order – that which kept Michael’s sword in his sheath and his legions leaning over the balustrade of Heaven in stunned awe.

“The Third Day sweetens the mystery,” indeed! And they will have “eternity to solve it and to praise.”

The Maker of the universe…as Man, for man was made a curse.
The claims of Law which He had made, unto the uttermost He paid.
His holy fingers made the bough, which grew the thorns that crowned His brow;
The nails that pierced His hand were mined, in secret places He designed.
He made the forest from whence there sprung the tree on which His body hung;
He died upon a cross of wood, yet made the hill on which it stood.
The sky that darkened o’er His head, by Him above the earth was spread.
The sun that hid from Him its face, by His decree was poised in space.
The spear which spilled His precious blood was tempered in the fires of God.
The grave in which His form was laid was hewn in rocks His hands had made.
The throne on which He now appears was His from everlasting years;
But a new glory crowns His brow, and every knee to Him shall bow:
The Maker of the universe.

This article was originally posted at the ClashDaily.com blog.

SpeakOut Illinois: An Invitation to Attend Our State’s Premiere Pro-Life Conference
b
a
x
r