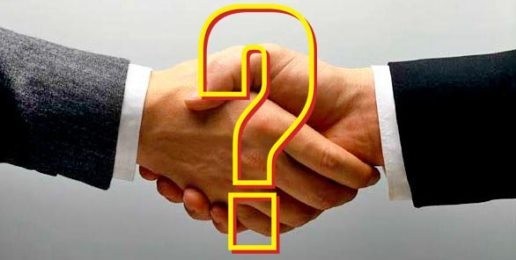 COMPROMISE: Pavlovian Response of a Wussbag Worldview
Written By   |   08.29.14
PRINT

Why do we assume that compromise is a good thing? The word itself provokes a Pavlovian response across Western culture, but is compromise categorically a good thing? By definition, compromise requires all parties involved to meet somewhere in the middle of their respective positions, yet half of Evil is still Evil, is it not? Should we applaud those who compromised with Josef Stalin for their statecraft? How does history view Neville Chamberlain and the lives which were lost as a result of his lack of intestinal fortitude and willingness to compromise? Compromise can be a good thing, but not when two positions are diametrically-opposed. In that type of situation, there is no way to meet in the middle without denying the validity of your own position.

Francis Schaeffer was masterful when he spoke against this fallacy of synthesis or “dialectical thinking”. He realized that our culture has shifted from thinking in terms of thesis/antithesis, preferring to ignore logic and reason in order to embrace synthesis.

So when the nation of Israel states their position to be unequivocal in regards to the safety of their citizens and Hamas states their position to be unequivocal about the annihilation of the nation of Israel, it is idiotic to pretend that the two positions are reconcilable. There is no “compromise” possible since the two positions deny the validity of the other side’s position. Would Secretary Mashed Potato-Face favor an agreement where Israel is half-annihilated? This is synthesis, the attempt to blend together two incompatible concepts.

In this way, and many others, we have abandoned logic and reason for emotion. We take a stand for what feels right instead of what is logically possible. In addition to this emotional governance, we’ve been indoctrinated to believe that conflict is a bad word. Progressive ideals have been so fully-assimilated into our culture that we prize progress (e.g. moral and cultural erosion) over principled opposition. Thus we see progressive Republicans asking for compromise and standing with the Left, helping to vilify conservatives for their stubbornness to get into the boxcar. Too often we crave compromise and run from conflict, when we should crave conflict and run from compromise, when the stakes are ideological.

The political climate in America today is not a result of disagreement on policy. This is not a political spat which will blow over in an election cycle or two. This is an ideological war over the future of America and (by proxy) the rest of Western civilization. It’s clear that there is no other “shining city on a hill”. It is us and then….nada.

So when we see the footage and watch the interviews from places like Ferguson and Murrieta, it’s readily apparent that the two sides aren’t even sharing the same ballpark. Those who held the line against immigration anarchy in Murrieta stood for the rule of law, a secure border, and a clear legal immigration policy. How does one compromise on any of those positions without losing the foundation of your position as a whole? Should they settle for adherence to the rule of law every other week? Should they accept a mostly-secure border? Or a moderately-clear immigration policy?

The reality is that one of the worldviews on display in America will win. We will either complete the fundamental transformation into a socialist, progressive state or we will return to our roots of liberty, bucking the whip and chain. So for us to pretend that if we play enough patty cake they’ll give us our Legos back is beyond naïve, it is dangerous. There is only one way conservatism will prevail and that is by fighting this ideological war wherever we encounter resistance. It will undoubtedly provoke hatred.

We’ve seen glimpses of the riotous wrath which bubbles to the surface whenever conservatives dare to draw a line in the sand. When Vice-Presidential candidate Sarah Palin sent salvos across the bow of USS Obama in her nomination acceptance speech, the conservative base was rejuvenated almost overnight. As was the hateful opposition, who dragged her name, family, and career through the mud in order to compromise her candidacy. But Sarracuda is still standing, stronger than ever; as are the principles of Constitutional conservatism. We can either confront Totalitarianism in America, paying the requisite price, or we can kiss the ring of Compromise, purchasing the esteem of total strangers at the cost of our nation’s soul.

This article was originally posted at the ClashDaily.com website.