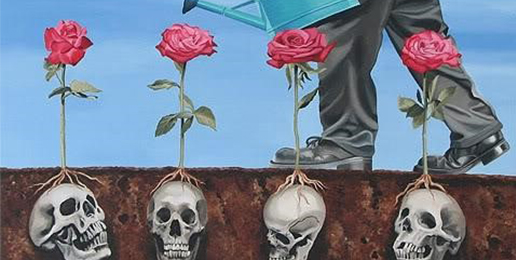 What do you get when you cross a “non-religious” person with an eco-freak? You get a devotee of human composting. And by that, I don’t mean humans who compost. I mean humans who are turned into compost—after death, of course. Lesbian Katrina Spade has been promoting the eco-friendly composting of human remains since 2014 when she founded the Urban Death Project, since renamed Recomposed. Get it? Composting humans is recast as re-composing them, kind of like re-purposing them. What the new name loses in forthrightness, it gains in marketability.

NBC News reported that openly homosexual Washington State Democratic senator Jamie Pedersen picked up this blight idea from composting fanatic Spade and plans to introduce a bill this month to legalize the composting of human corpses. Pedersen also supported the legal recognition of intrinsically non-marital homosexual relationships as “marriages” and the legalization of recreational marijuana. Another lawmaker turning a beautiful state into an unlivable place to raise families.

Spade recounts her 2013 composting epiphany in a TEDx Talk—you know one of those smarmy homilies often by people with bad ideas. She was ruminating on what her family might do with her remains when at that very moment a friend called and happened to mention that farmers compost their dead livestock. EUREKA!

Inspired, Spade’s creative juices started flowing, and now she and her fanatic eco-allies have arrived at a solution to the problems of expensive funerals and land-wasting cemeteries:

We’ve created a scalable, replicable, non-profit, urban model based on livestock mortality composting that turns human beings into soil…. In the next few years, it’s our goal to build the first, full-scale human composting facility right here in Seattle.

The process involves placing unembalmed human remains wrapped in a shroud in a 5-foot-by-10-foot cylindrical vessel with a bed of organic material such as wood chips, alfalfa and straw. Air is then periodically pulled into the vessel, providing oxygen to accelerate microbial activity. Within approximately one month, the remains are reduced to a cubic yard of compost that can be used to grow new plants.

Wise people have been warning for decades that abortion and euthanasia devalue and desacralize the human body. In addition, the resurgence of pagan spirituality and the ancient heresy of Gnosticism exacerbate and accelerate this desacralization.

Writing in The Catholic World Report, Benjamin Wiker, Professor of Political Science and Director of Human Life Studies at Franciscan University, explains that modern Gnostics reject the theologically orthodox view that “[j]ust as Christ was not a pure spirit merely appearing to have a body, we are not souls trapped in bodies. Our essential union of immaterial soul and material body is meant to be by the good Creator God.” Modern Gnostics believe that the “human body itself is the result of blind processes, cobbled together over millions of years of evolutionary meandering,” and, therefore, devoid of any intrinsic value.

John Horvat II, author and Vice President of the American Society for the Defense of Tradition, Family and Property, rightly condemning human-composting, describes the esteem for burial humans have historically held:

From time immemorial, people have buried the dead. Sometimes, they even risked their lives to carry out this most basic duty….

The Old Testament recounts the story of the elder Tobias, who, while exiled to Nineveh, observed the Hebrew Law by burying the dead against the wishes of King Sennacherib.

Even ancient peoples like the Greeks felt compelled to pay a final reverence to the deceased. Thus, Sophocles in the play “Antigone” relates the story of a sister who defies the orders of the Greek tyrant Creon, not to bury her brother, whom he had defeated in battle. She proclaims the right to bury her brother came from “unwritten and unchanging laws. They are not just for today or yesterday but exist forever, and no one knows where they first appeared.”

The body is sacred and must be treated with all due dignity and respect. It has always been that way. No one needed to explain why the dead must be buried—until our time.

There is a debate among Christians about cremation. Space does not permit even an outline of that debate, but it’s important to note a critical distinction between cremation and human composting. With human composting, the goal is to use the human body, that is to say, to instrumentalize the body, treating it as if it possesses no more intrinsic worth than fertilizer.

Anticipating the objection “What difference does it make if the person’s final resting place is at the base of a tree rather than laying in a grave,” Horvat responds:

It would make no difference at all if there were no soul. The great accomplishment of the ecologists who created “recomposition” is not engineering the mechanical contraption that turns humans into compost. It is overturning those “unwritten and unchanging laws” embedded in human nature by which people have sensed the need for reverencing the dead from time immemorial.

Isn’t “recomposition” what the “trans” cult believes they can do? Don’t they believe they can recompose male bodies into female bodies?

In a grave tone of voice with not a glimmer of irony, Spade pays lip service (or as Macbeth calls it “mouth honor”) to the natural and deep reverence people have for the bodies of loved ones as demonstrated in the ceremonies that attend their deaths:

Imagine it: part public park, part funeral home, part memorial to the people we love, a place where we can reconnect to the cycles of nature and treat bodies with gentleness and respect.

Hmmm… is that how most people conceive of human-composting?

How long before cannibalism of recently deceased humans is legalized? After all, why waste all that good meat. Maybe we could call it Soylent Green.