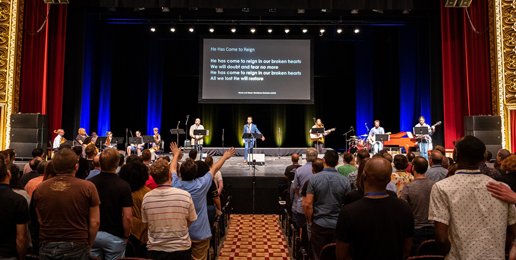 The more you look into the “gay but celibate” movement advancing rapidly into once theologically orthodox Christian churches, the more disheartened you become by church leaders who have been slow to counter it, or worse, are embracing it.

The conservative Presbyterian Church in America (PCA), a small but influential denomination that separated from liberal mainline Presbyterianism in the early 1970s, is at a tipping point because of Revoice, a ministry that claims to be “observing the historic Christian doctrine of marriage and sexuality” but whose inaugural conference last summer included workshop titles like “Redeeming Queer Culture: An Adventure.” An ecumenical effort that’s primarily Protestant but open to Catholics, Revoice was not organized by the PCA, but Revoice leaders and supporters include pastors and others in the PCA.

While disavowing homoerotic acts, Revoice leaders sound like secular LGBT activists in portraying “gay Christians” as oppressed minorities who deserve the right to define themselves on their own terms, no matter how bizarre or disruptive to the larger Christian community. In defiance of logic, they celebrate “gay” identity and aspects of “gay” culture while promising never to engage in homoerotic sex.

Revoice conference speaker Eve Tushnet, a Catholic, has written approvingly of celibate “gay Christians” joining the festivities at homosexual pride parades. Her Twitter bio says her “hobbies include sin, confession, and ecstasy.” Even Episcopalians might find it tacky to name sin as a hobby, but apparently, it’s to be cheered as harmless fun by evangelicals if they want to appear sensitive to those struggling with homosexual attraction.

While Revoice primarily promotes “gay but celibate,” some involved in Revoice are in what they call “mixed-orientation marriages.” They are married to someone of the opposite sex, but continue to publicly identify as gay and talk openly about their persistent homosexual desires. In the world of Revoice, this is vulnerability worthy of praise. For others, it is a sickening disregard for marital vows and the respect owed one’s spouse.

Revoice held its second annual conference in early June. So far, the PCA has not disciplined PCA leaders and promoters of Revoice for their role in perversely trying to blend traditional Christian teachings with a worldly LGBT mindset. At its annual general assembly June 25-28 in Dallas, the PCA approved the Nashville Statement as a document of biblical fidelity to share as a discipleship tool. But the statement, released by an evangelical coalition in 2017 to bolster orthodoxy on sexual matters, will likely not be binding within PCA church courts. The PCA at its general assembly also approved a study committee to examine its own confessions as they pertain to sexuality. The Chicago Metro Presbytery was among those asking for a study committee.

If the words “study committee” sound familiar, that’s because the mainline denominations set up study committees when they were hit with debilitating brain fogs about their long-held beliefs related to sex, marriage, and family. They went on to approve homosexual “marriage” and help the culture usher in transgender pronouns and drag queens as children’s entertainment. It’s also noteworthy that on their way to giving full approval to homosexuality and homosexual “marriage,” mainline denominations endorsed “gay but celibate,” including among clergy.

The storm in the PCA has become especially fierce because one of its pastors has come out as a celibate “gay Christian.” Greg Johnson hosted the first Revoice conference at his St. Louis church last year but didn’t publicly wear the “gay” label himself until May when he wrote a revealing piece for Christianity Today. At the denomination’s recent general assembly, Johnson took to the floor to deliver a speech, both self-pitying and self-glorifying, in which he denounced Article 7 of the Nashville Statement, which says, “We deny that adopting a homosexual or transgender self-conception is consistent with God’s holy purposes in creation and redemption.” Johnson, who likened people with homosexual desires to paraplegics and infertile women, said Article 7 “hurts” him. While Johnson has at times described homosexual desires as sinful, these comparisons in his speech underscore a profound lack of consistency and clarity in doing so.

Johnson’s speech was applauded by many at the general assembly and praised by others on social media. Even Denny Burk, a Southern Baptist academic critical of Revoice who overall has written commendably on sexuality from an orthodox perspective, wrote that Johnson “spoke powerfully of his own experience, and I was genuinely moved by what he said.” One thing that has slowed the gears in addressing the “gay but celibate” movement is the insistence of leaders in the evangelical world to give credit where it’s not due. Johnson’s speech was disturbing. It’s genuinely moving when someone fighting unwanted homosexual attraction, or any sinful desire, humbly seeks help at his church to walk closer with God. It’s deeply troubling when a pastor pleads at his church body’s annual meeting for recognition of a sinful identity as part of a divisive movement that threatens a denominational split.

To his credit, Burk identifies where Johnson goes wrong in his interpretation of Article 7:

Adopt means to embrace or endorse. The point of the article is simply to say that it is out of bounds to embrace an understanding of oneself or one’s sin that is at odds with God’s design in creation and redemption. This is not a controversial point, or at least it shouldn’t be among Christians.

Johnson’s own presbytery in Missouri investigated Revoice and released a report shortly before the PCA general assembly with words of caution for the “gay but celibate” ministry. But the report had sharper words for critics for supposedly making snap judgments about Revoice leaders and failing to appreciate the “nuance and complexity” of the issues they raise. The Missouri Presbytery, like the Chicago Metro Presbytery, asked for a denominational study committee. As onlookers wait to see if the PCA will take meaningful action to stamp out the contributions of its leaders to the “gay but celibate” movement, activists with Revoice and similar efforts will undoubtedly march on, pushing into more conservative churches of various affiliations to further desensitize believers to “queer” culture with a Christian spin.

Revoice conference speaker Pieter Valk, an Anglican, is the founder of EQUIP, a Nashville advocacy group whose mission is to “equip the church to better love sexual minorities.” EQUIP wants to remove any shame associated with homosexual lusts and is adamant that homosexual orientation is fixed, holding out no hope for Christians who want to be rid of homosexual desires. On the “Beliefs” page of its website, EQUIP says that “while we affirm and teach from a traditional sexual ethic, we respect all people’s right to follow their own paths.” Not exactly a robust statement of Christian orthodoxy. But it’s in keeping with what others in the “gay but celibate” movement sometimes say. They insist they are against homoerotic sex. But unlike Christians who believe such acts are categorically wrong, they make it sound like this belief is something to be subjectively determined based on the intensity of one’s religious sentiments.

EQUIP has little to say about sin and repentance, except in its shaming of the church for alleged past mistreatment of homosexuals. Its website even suggests a prayer for the church to pray in which the church repents of “destructive theology”:

Even more troubling is the participation of Revoice speakers in LOVEboldly, a Kentucky-based group that reaches out to church staff, including youth pastors, on behalf of both celibate gays and those who see nothing wrong with homoerotic acts. The group promotes “reconciliation and healing” between homosexuals and Christians with traditional beliefs.  The LOVEboldly website explains, “We are deeply persuaded that agreement with one another’s political and theological perspectives on sexuality is not essential for moving towards loving one another boldly.” Imagine if Christian marriage counselors were to partner with an organization that believes adultery and open marriages are acceptable. The sympathy Christians feel for people in difficult marriages would not be seen as justification for linking arms with advocates of views so strikingly at odds with orthodox Christian beliefs.

That the “gay but celibate” movement has made so many inroads with such a morally compromised agenda reflects the degree to which far too many conservative Christians have been emotionally manipulated to see LGBT people as victims who must be treated with special sensitivity, even if that means giving celibate “gay Christians” exemptions to biblical teachings about personal holiness. Well-meaning Christian leaders have wanted to assume that activists have good intentions when they should have been more concerned about protecting their flocks from wolves.

Revoice leaders would have you believe that if it weren’t for them, there would be no one to help Christians with homosexual desires. But that’s far from the truth. Organizations and individuals sympathetic to the challenges posed by homosexual attraction have been around for years to help such Christians. But their message of leaving “gay” identity and culture behind is one many in Revoice want to silence. At the recent Revoice conference, a speaker mocked Rosaria Butterfield, a Christian writer and former lesbian now married to a man. (After getting pushback from some at the conference, the speaker later apologized.) Butterfield is controversial among many Revoice leaders and supporters because she doesn’t believe Christians should embrace a homosexual identity. As Butterfield puts it, “How can any of us fight a sin that we don’t hate?”

The insidious “gay but celibate” movement has started to drown out voices like Butterfield’s because activists have deftly exploited the fears of Christians who don’t want to be called haters. The message of Revoice and similar efforts is tailor-made for people-pleasers who want to be Christian and LGBT-friendly in a way that might lessen cultural pressure to go along with LGBT pride and delay or make unnecessary the taking of a costly stand in defense of orthodox convictions. But going along with the drift in the church on this critical issue is cowardly and unloving. True love rejoices in the truth and the time to stand for truth is now.