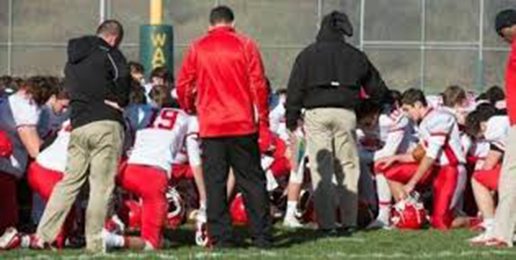 Attacks on Prayer From Anti-Christian Foundation
Written By   |   12.15.15
PRINT

There’s an enormous misunderstanding regarding the U.S. Constitution as it relates to religion and it’s causing all sorts of trouble for folks that just want to pray. The misunderstanding is being intentionally propagated by an atheist group that wants to ban religious expression in public.

The Freedom From Religion Foundation (FFRF) has a notion that government and religion are mutually exclusive. Their mission is “to protect the constitutional principle of separation between church and state.”

The problem here is that there is no such “constitutional principle.”

Nowhere in the U.S. Constitution, the Bill of Rights, or the Declaration of Independence is there a word about keeping religion out of public life; or the so-called “separation of church and state.” In fact, what the U.S. Constitution does say is that the government has no authority to make any laws pertaining to the free exercise and expression of religion.

But that doesn’t stop this atheist group from demanding that coaches not take part in team prayers.

One of the latest cases comes from the western suburbs where a high school football coach is under fire for simply being present with his players during team prayers. (Click here to read the local article.)

The complaint came after a picture of the Naperville Central High School football team, including the coaches, was sent to the FFRF. They sent a letter to the school district demanding the action cease immediately.

Now, first of all, I want to know why the school district didn’t tell the FFRF to take a hike. The FFRF has no legal power and very little influence. In fact, when schools or other groups stand up to the FFRF they tend to back down and slink back into the shadows. So I can’t help but wonder why the school district didn’t simply dismiss the letter. I will applaud their response though, in letting the FFRF know that what takes place is voluntary and student led, and does not force anyone to participate. In other words, it’s none of their business.

Are we really ready to concede that school employees have no religious freedom? Just because someone works for a school doesn’t mean their religious rights are thrown out the window. I’m not suggesting that teachers or coaches can demand their class or athletes attend a Bible study, but the idea that they can’t attend a student led prayer is absurd.

The FFRF says that school employees taking part in a student led prayer is the government supporting religion and a form of coercion. Such a notion is so preposterous it almost doesn’t deserve a response. By the way, why doesn’t the FFRF get upset and send angry letters when our president mentions God or tells Americans to pray? That’s odd.

This shows that the FFRF doesn’t know the history of our country and the intentions of our Founders. History is rife with what our Founders thought of the Bible and faith. Not only were they themselves Christians, but they worked tirelessly to create a country where faith was not relegated to a Sunday ritual but was integrated into every facet of daily life. (Click here to read quotes from our Founders regarding faith.) The idea that public prayer by school employees would be considered wrong would be foreign to them.

In an update to this ongoing story I was impressed to read the statement released by the football team. In response to the attack from the FFRF they wrote:

“The players will continue this tradition of praying before our games, and would like to extend an invitation to all members of the Freedom From Religion Foundation, to come out next fall and watch us pray and play the game we love…We, as a football team and a family, give Coach Stine our full support…[Coach Michael Stine] “is the best coach in the state, and cares about each and every one of us more than any other coach cares about his players.”

“It’s not the fault of these students that they do not understand the legal principle being violated when a coach leads, encourages or participates in prayer with student players.”

The FFRF appears to think the football team is too dumb to understand what’s going on. I think they understand perfectly. I think what is going on before and after games reflects the heart of this community and that both students and parents are supportive. And what the FFRF is unwilling to recognize is that a majority of people in America are supportive of moments of silence and even prayers before and after sporting events. They understand these voluntary exercises of religious freedom as being necessary and healthy.

What this really comes down to is the FFRF’s contempt for Christianity and wanting to impose their “religion” of secularism on our society.

They hate the One to whom we pray. They don’t want to see any Christian religious expression in public places or as part of anything associated with the government. But they are perfectly content to allow and support expressions of atheism. This hypocrisy is contemptible because atheism itself is a religion with tenets as any other religion.

There is no “constitutional principle” that gives them the right to impose their religion of atheism while Christianity is banned.

The FFRF doesn’t like anything religious. As secular humanists they believe that this world is all there is. So they are happy to help develop someone physically and mentally. But when it comes to spiritual development they see that as a waste of time. And they think a coach that cares enough to develop his players physically, mentally, and spiritually is misusing his position.

I’m reminded of a high profile coach that was targeted by the FFRF for his voluntary spiritual development activities. Mark Richt, the famed coach of the Georgia Bulldogs (now with the Miami Hurricanes) made it clear that he and his staff care about every aspect of their players, including their spiritual well-being. When he was attacked by the FFRF he responded:

“I think we’re made of our body, we’re made of our mind, we’re made of spirit. We work hard on our bodies as far as getting them in shape. We’re working on schemes, plays, lifting, running, nutrition, sleep. When we work on the mind, we care very much about them getting their degrees, tutoring, academic appointments, classes and all, meetings. All those things are mandatory. But anything that has to do with growing spiritually, which I encourage our guys to grow spiritually, I believe our spirit is going to live beyond our body. I encourage them to grow spiritually but I don’t tell them what to believe in. Everything we do is strictly voluntary in that regard.”

Coach Richt and Coach Stine represent what the Founders envisioned of America. A place where people could freely take part in spiritual development and expressions of their religious beliefs without coercion. That includes the right to abstain from such expressions as well. The support that both of these coaches have been given shows that Americans continue to see value in such voluntary expressions. Those who disagree should exercise tolerance and be reminded that the Constitution ensures the government can make no law prohibiting the free exercise of religion.

Take ACTION:  If you know anyone who goes to this Naperville high school (teacher or student) who would like to challenge this feckless mandate, please contact us by email at contactus@illinoisfamily.org.