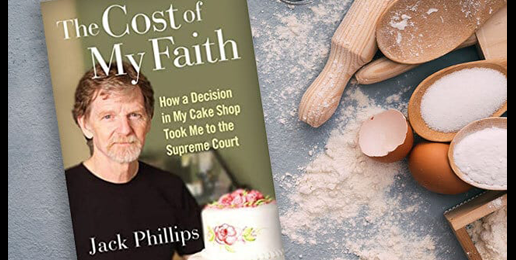 Jack Phillips, the owner of Masterpiece Cakes in Lakewood, Colorado since 1993, recently published his deeply moving story titled The Cost of My Faith in which he shares what he has experienced over the past nine years.

One afternoon in July 2012, David and Charlie visited Masterpiece Cakes and asked Jack to design a wedding cake for their upcoming “marriage.”

This is how nearly ten years of legal challenges, death threats, obscene phone calls, and injustice began for Jack and Debbie Phillips and their family.

This is not the only part of the story that Jack so beautifully shares. This story is not ultimately about Jack’s courage but about God’s sovereign grace and work in the life of this family. Christians in America and around the world need to hear about Jack’s faith and courage.

So, what happened after this brief conversation in July 2012?

After six weeks, Jack received a letter from the Colorado Civil Rights Division charging him with sexual-orientation discrimination. Ten days later, Jack received a second notice citing a second charge. A few months later, he received a third letter stating that the charges were going to the Colorado Civil Rights Commission–a panel of seven unelected gubernatorial appointees. Think of a commission that Joseph Stalin would be proud of and that is what this one was like. The prosecutors and judges would be in the same camp. No Colorado official bothered to investigate the situation from Jack’s perspective.

The Colorado Civil Rights Division moved forward to prosecute Jack. Shortly after, on Dec. 6, 2013, a judge ruled that Jack did not have the freedom to choose the messages he would use his artistic talents to express.

On May 30, 2014, Jack’s case was decided by the commission. It was ruled that Jack had to make all requested cakes, even pornographic ones. If he refused, he had to file a report giving his reasons why. In addition, all of his staff, including his 80-year-old mother at the time, had to undergo mandatory “sensitivity training.”

This perversion of justice forced Jack to stop creating wedding cakes, which was the heart of his business and talent.

Thankfully, Jack was not alone in standing for Jesus Christ. Alliance Defending Freedom (ADF) has helped Jack throughout his legal battles. They have done a fantastic job in the face of tyranny.

It should be noted that Jack’s views were compared to those of Nazis and his actions to the actions of Nazis during World War II and the Holocaust. This is the kind of perverse reasoning, Christians are increasingly facing.

Jack appealed the ruling of the thugs on the Colorado Civil Rights Commission. His case went to the Court of Appeals where he lost. Then his appeal to the Colorado Supreme Court was rejected. After four years of this fight, his final chance for justice was an appeal to the U.S. Supreme Court. On July 22, 2016, Jack petitioned the court to hear the case of Masterpiece Cakeshop v. Colorado Civil Rights Commission. After nearly one year of waiting, the court agreed to hear the case. The court date was scheduled for December 5, 2017, after more than five years into Jack’s story.

And then amazingly on June 4, 2018, Jack checked the latest news on his case on the SCOTUS blog. He won in a 7-2 decision, with only Ginsburg and Sotomayor dissenting.

You might think this would be the end, but you would be wrong.

The next round of battle was led by Denver attorney, “Autumn” Scardina, a man who pretends to be a woman. Scardina requested a cake that was blue on the outside and pink on the inside, celebrating his so-called transition. Jack and his team declined to make this cake.

On July 20, 2017, Scardina filed a charge with the Colorado Civil Rights Division. That meant that even after his historic victory, Jack enjoyed only about three weeks of “normalcy.”

Jack and ADF wisely went on the offensive in this round on August 13, 2018 and filed a federal lawsuit in the U. S. District Court. Masterpiece Cakeshop Inc v. Elenis charged the members of the commission, along with the state attorney general and governor, of unequal treatment in light of the fact that other bakers were allowed to refuse to make cakes with messages they could not support.

In the midst of this, on October 9, 2018, Jack learned he was going to be prosecuted a second time by the commission.

On January 4, 2019, Jack and his team won a legal victory against the state and its motion to block his federal lawsuit. And then much to his surprise, the state requested a settlement with Jack. Jack was now 2-2 after seven years of litigation.

But was this the end? Sadly, no.

On June 5, 2019, Mr. Scardina filed a new case in Colorado state district court seeking more than $100,000 dollars in penalties and damages against Jack for his refusal to make a cake. Masterpiece III is still in the works.

As of the printing of this book, the case was preparing to go to trial.

Jack is a humble but brave servant of the Lord Jesus Christ. I would encourage you to help him by purchasing a copy of his book and keeping him in your prayers. The fight is not over.