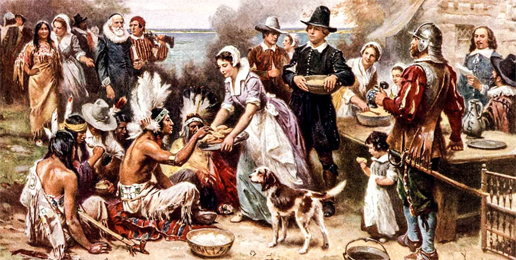 Years ago, on another cold November day, I listened as a news anchor spoke with his co-host of that for which he was thankful, and I wondered, to whom does he give thanks? He never addressed that question.  It is quite pointless to talk of being thankful if one does not actually give thanks to someone.  Do we thank the floor or the sky?  Why be thankful at all if our gratitude is not directed to someone?

Most of us know enough colonial history to remember the “First Thanksgiving,” dated November 24, 1621.  Whether that was actually the first thanksgiving feast on American soil is uncertain, but the date is not as relevant as the fact that those early Pilgrims understood the need, in spite of a horrendous first year, to render thanks to God. Half of the Mayflower immigrants had died the winter following their arrival, and the remaining survived only by God’s grace and His provision of Native Americans like Squanto and the kind Wampanoag people who helped them immeasurably.

A cynic might suggest that the Pilgrims had more to complain about than to praise, but God is not impressed when we allow ourselves to think we deserve an easy life or bounteous provision simply because we exist, (as so many Americans now appear to believe).  Looking at mankind from God’s vantage point reveals rather, as Jonathan Edwards might have put it, “sinners hanging by a mere thread of God’s mercy.”  America’s current moral climate is disastrous, mirroring a time about four thousand years ago when God proclaimed that, “every intent of the thoughts of his (mankind’s) heart was only evil continually,” (Gen. 6:5). I dare any reader to provide evidence of mankind’s basic goodness!

No, on the contrary, crime is rampant, murder epidemic, lying and deception normalized, and sexual perversion is celebrated, to name just a few examples of our depravity.

Yet, God has seen fit to allow us even yet to flourish! What a gracious God! He is so good! But we must not take His grace for granted! Paul, in the Book of Romans, notes that God’s goodness ought to lead us to repentance. And a key element in true repentance is gratitude to God for the forgiveness He provides for all who turn away from their wickedness.

I suppose that the “First Thanksgiving” and this year’s Thanksgiving falling on the same date is merely coincidental, but their gratitude despite severe trials is a great example to us. We have endured much over the past year or so, but regardless, we too, should be grateful. Often blinded and confused by the trials we are experiencing we cannot see the bigger picture, God’s wise and sovereign plan.

Paul tells us in I Thessalonians 5:18, “In everything give thanks; for this is the will of God in Christ Jesus for you,” because, “all things work together for good to those who love God,” (Rom. 8:28).  God does bless thankful people, and we do not know whether He might even yet move in a mighty way to turn the Nation from the decadence that has characterized it for decades. I have no doubt that the grateful spirit of those Pilgrims was an important element in God’s blessing America in the years that followed that first harvest season, and in the two hundred plus years since.

Tragically, while those who understand God’s holiness tremble at the reality that His wrath must certainly wax hot at this very moment, millions of Americans refuse not only to repent, but are not grateful for all His benefits which flow over and around us daily. While multitudes across the globe continue to suffer in poverty and toil as they have for thousands of years, Americans sit in warm houses supplied with bounty only kings in ancient times enjoyed!  Even the poorest of our citizens eat like the wealthy of two hundred years ago.

There are exceptions, of course, but God has blessed us so abundantly that we need not merely wring our hands in despair. We can with hope seek to extend the “blessings of liberty” beyond “ourselves and our posterity” to the needy everywhere.

The liberty and prosperity we have enjoyed for over two hundred years, along with many other things, are evidence of God’s grace on America for which we must be grateful, not just at Thanksgiving, but throughout the year!