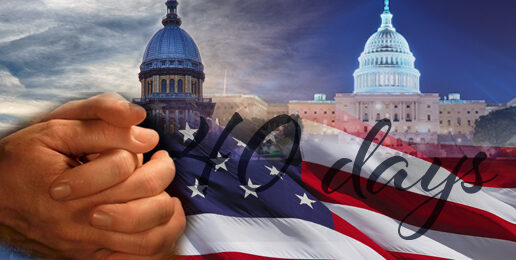 Christians must keep in mind that God is sovereign. The destiny of our nation is not ultimately in our power to control. That said, we live in a country that we the people govern, and so we have the privilege, right, and obligation to govern wisely.

Unfortunately, at times there is little difference between candidates when it comes to voting to fund wicked organizations like Planned Parenthood. However, as the policies and agenda of the Democrat Party become increasingly demonic, the choice between parties becomes clearer, and each election becomes more significant.

It is hard to fathom that Bill Clinton signed the Defense of Marriage Act, something that Democrats are now fighting hard to overturn. It was Clinton who supported “Don’t Ask, Don’t Tell,” which admittedly was not the best policy, but it was preferable to what we have now.

With 40 days to the midterm 2022 elections, it is time for all Christians to be aware, engaged, and in prayer. It is not hyperbole to say that the outcome of the elections could be a matter of life and death, freedom vs. tyranny.

If things do not change, the SAFE-T Act (AKA Criminal Protection Act) will take effect in Illinois on January 1, 2023. If passed, this wicked legislation—which some Democrats are now saying needs to be “clarified”—will be a significant boon to the criminal class in Illinois. Other states are reeling because of similar policies that have only incentivized crime.

If Democrats have their way, young children will be given guidance and care to “change their gender” without parents have any say.

If Democrats have their way, the FBI will continue to be used to watch parents who show up at school board meetings, to target with overwhelming force and presence those who stand against abortion, and to promote the foolish idea that white Christians are the greatest threat to our nation.

The number forty is biblically significant. The rain during the great deluge of Noah lasted for forty days and forty nights (Gen. 7:4, 12, 17). As the flood waters started to subside, Noah waited another forty days before opening the widow of the ark and sending out a raven (Gen. 8:6). The children of Israel ate manna for forty years (Ex. 16:35). Moses went into the midst of the cloud on Mt. Sinai for forty days and nights (Ex. 24:18). The spies sent out by Moses were on a forty-day mission (Num. 13:25). After this forty-day mission, God’s people spent forty years in the wilderness because of their rebellion (Num. 14:33-34). Significantly, our Lord was tested in the wilderness for forty days and forty nights (Matt. 4:2).

Take ACTION: We face in Illinois and across the nation a time of testing leading up to the November 8 election. My plea is that we take this time very seriously, treating it as a time of spiritual battle and pleading for God’s mercy. This needs to be a time of prayer, action, and encouraging others. Let’s not fail in this time of opportunity and testing.

The fifty-six men who signed the Declaration of Independence in 1776 made this pledge:

“And for the support of this Declaration, with a firm reliance on the protection of Divine Providence, we mutually pledge to each other our Lives, our Fortunes, and our sacred Honor.”

While the November 8 election is not as significant as this time in our nation’s history, it is appropriate to consider how serious the hour is and to make every effort to see the name of our Lord Jesus Christ honored and freedom and decency promoted. Will you commit to this?