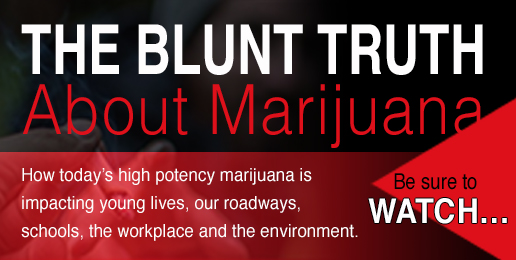 The Blunt Truth About Marijuana
PRINT

Whether or not you have made up your mind about legalizing marijuana for recreational use, the Illinois Sheriffs and Chiefs of Police Associations highly recommend listening to the experts.

“We encourage you to heed the warnings from people who speak first-hand about the effect it’s had on them, their profession, and their families.”

The Illinois General Assembly is considering legalizing marijuana for recreational use. Get all the facts before you decide whether this will be good for Illinois. Please pass this information along to others.

“We have discovered that it’s becoming almost impossible to get the straight facts about the predictable increase in fatalities, hospitalizations, and crime. Too many people are shrugging and saying, “Will it really do any harm?” Yes. Absolutely, it will.” …

In 2013, the Illinois General Assembly legalized medical marijuana. In 2016, the same body of lawmakers decriminalized possession of marijuana, reducing it to a $100 fine. And now some want full legalization of recreational marijuana.

The Illinois Chiefs of Police and the Illinois Sheriffs’ Associations strongly oppose legalizing high potency marijuana for recreational use and these webinars will give you a better understanding of why.

The Chiefs/Sheriff’s full letter is here.

Drug problems in Colorado schools increased with legalization. Marijuana proponents promised the voters lots of revenue for the schools. The only thing legalization has brought to schools is marijuana.

Presenter: Roger Morgan. Chairman/founder of Take Back America Campaign; former chairman
and executive director of the Coalition for a Drug-Free California; founding chairman of the Colorado
SAFE Foundation in 1997, a non-profit dealing with drug prevention; prior Board Member of the San
Diego Prevention Coalition; member of the National Coalition for Student Drug Testing; and Special
Advisor to the Golden Rule Society in Colorado. His two step-children became drug addicted and two
nephews died from drug related causes. Roger shares alarming statistics on marijuana’s hidden price: the environmental, economic, and human impact of legalization in
California.

Presenter: Chelsey Clarke. Chelsey is a Strategic Intelligence Unit Supervisor for the Colorado Rocky Mountain High Intensity Drug Trafficking
Area (RMHIDTA) program. She is a primary contributor to the annual RMHIDTA regional
Threat Assessment and The Legalization of Marijuana in Colorado: The Impact reports, as well as a leader
in the Colorado Heroin Response Work Group. She helped create and develop the current statewide
Heroin Impact Project which encompasses a two-pronged approach: Operation Poison Pusher and
Operation Helping Hand.

The evidence is undeniable. Legalization has strengthened the black market, increased crime, and made the roads more dangerous in Colorado.

CLICK HERE to watch – If It’s Legal, Why Test? Addressing the Marijuana Bully in the Workplace.

Presenter: Chuck Marting. Serves on the Board of the National Drug and Alcohol Screening Association;
former law enforcement officer where he spent 17 years as a Drug Recognition Expert; expertise in
workplace impact, has trained district attorneys, school administrators and business owners on workplace
impairment testing.

CLICK HERE to watch – Cannabis in the Emergency Room

Presenter: Dr. Karen Randall, MD. Emergency Room Physician in the 3rd busiest Emergency Department
in Colorado; trained in emergency medicine, pediatrics and family practice; holds a certificate in Cannabis
Science and Medicine from the University of Vermont; on the Board of Directors for SCEMA and VP of
case management for SCEMA; has spoken nationally and internationally on the harms of marijuana.

Today’s marijuana is contributing to a rise in homelessness in Colorado, putting a tremendous strain on the state’s Medicaid system and hospitals. Many come to Colorado “for the weed.” Marijuana dispensaries are recommending that pregnant mothers use marijuana to alleviate morning sickness, which is neither good for moms-to-be or their babies. The current marijuana is very potent, with THC levels as high as 90%. In the 60’s and 70’s, it was around 2%. Common presentations in the ER: hyperemesis (known as scromitting), psychosis, polysubstance use/abuse, acute cardiac issues.

CLICK HERE to watch – Is Marijuana a Solution to the Opioid Crisis?

Presenter: Dr. Ken Finn, MD. Board Certified in Physical Medicine and Rehabilitation, Board Certified in
Pain Medicine and Pain Management; licensed in Colorado, Utah and Arizona; president and founder of
several Rehab Medicine businesses; serves on the American Board of Pain Medicine Executive Board and
Exam Council; Volunteer Clinical Instructor at University of Colorado, Colorado Springs Medical Branch;
published several papers related to cannabis in the face of the opioid epidemic and societal effects.

Cannabis has not curbed the opioid epidemic in Colorado, which saw a record year of opioid
deaths in 2017.

Presenter: Aubree Adams. Aubree’s son started using marijuana in the 8th grade, soon after Colorado
legalized the drug for recreational use. As a freshman, Aubree’s son had a psychotic break and tried to kill
himself. Her son continued a cycle of addiction and mental illness for several years. He is now in recovery,
and admits marijuana almost killed him and was his gateway to other drugs. And much more. Aubree is affiliated with
Mom’s Strong, Parents Opposed to Pot, and Marijuana Victims Alliance.

Topic: Psychotic behavior. Addiction. A gateway to other drugs. Today’s marijuana is not the pot that you
smoked in the 60’s and 70’s. More kids are using and becoming addicted.

Presenter: Lynn Riemer Speaker, trainer and advocate on issues relating to substance abuse. Lynn
is president of ACT on Drugs, Inc., a non-profit organization with a mission to educate parents, teens, and
professionals about addictive and psychoactive substances, both legal and illegal. This past school year,
Lynn provided 772 trainings, 725 directly to middle and high school students. She has extensive
knowledge of drug chemistry, having served with the DEA and on the North Metro Drug Task Force.

Presenter: Matt Montgomery. Matt served in the Broomfield Police Department for 9 ½ years and is a
national expert in school safety, certified by the National Association of School Resource Officers. He has
extensive training in drug detection, and its effects on adolescents. Matt holds a Masters in Teaching and
Learning from Colorado State University.