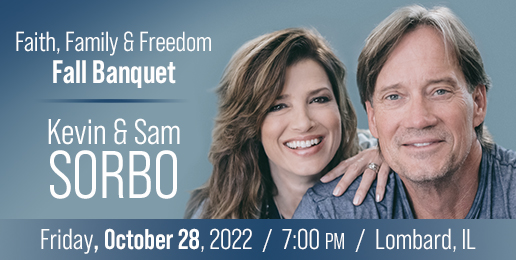 The IFI Fall Banquet is October 28th at 7 PM at The Carlisle, located at 435 E Butterfield Rd in Lombard. (If you purchased a reservation for the private reception, it is from 6 PM to 7 PM.)

This year our keynote speakers will be Kevin and Sam Sorbo. They are known as Hollywood stars who love Jesus Christ. World Magazine calls them “outspoken conservative evangelicals in a fiercely liberal industry.” Kevin is most well known for playing Hercules while Sam played Serena in the 1990’s TV series Hercules: The Legendary Journeys. Many will remember Kevin playing the atheist professor in movie GOD’S NOT DEAD.

Kevin and Sam are featured in a documentary film titled “Leaders for Life” in which they warns about the societal impact of abortion and praise President Trump for his progress on the issue. The 80 minute film highlights the modern-day pro-life warriors who are on the frontline of the paramount battle of our lifetime, the battle to end the daily mass murder of babies through abortion.

Kevin has become a social media sensation, as his Twitter followers have recently surpassed the one million mark. Sam has become an advocate for homeschooling, encouraging parents to get their children out of government schools. They are homeschooling their three children. She is a member of the PublicSchoolExit.com board of advisors.