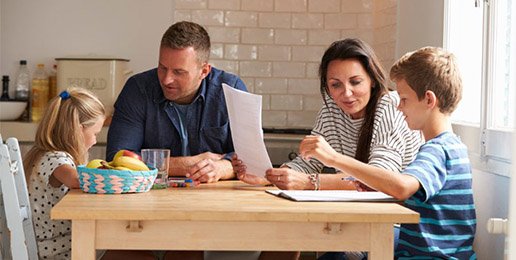 Why There’s an Increased Interest in Homeschooling
06.05.18
PRINT

There’s a lot to dislike about many public schools — and right now, student safety is at the top of the list. “After a gunman opened fire on students in Parkland, Florida,” a new Washington Times feature explains, “the phones started ringing at the Texas Home School Coalition, and they haven’t stopped yet.”

Like so many state organizations, the Texas organization was used to a certain number of inquiries about homeschooling. President Tim Lambert says they usually averaged about 600 calls a month — a number he watched double over the past several weeks. “When the Parkland shooting happened, our phone calls and emails exploded. And they’re not alone.

“I think what happens with these school shootings is they’re the straws that broke the camel’s back,” Christopher Chin, the president of Homeschool Louisiana, told the Times. “I don’t think it’s the major decision-maker, but it’s in the back of parents’ minds.” In general, he thinks, the violence, bullying, and dangerous environment is tipping the decision for families, who were already sick of the lack of quality instruction and the liberal indoctrination.

More families are angry about what their kids are learning — and they’re pulling their kids out of public school to prove it.

Over the last four years, reporters have seemed surprised by the mass exodus of children from traditional education settings. The homeschooling movement has ballooned from 1.5 million to estimates of more than 2 million now. Since most states aren’t required to count the number of homeschooling families, it’s still a guessing game. But there’s one thing everyone agrees on: more parents are making the leap — and fast.

Based on the crackdown on faith, the out-of-control sex ed, and genderless chaos, who can blame them? “Most parents homeschool for more than one reason,” Brian Ray points out at the National Home Education Research Institute. When he asks families, he hears these issues over and over again: “a desire to provide religious instruction or different values than those offered in public schools; dissatisfaction with the academic curriculum, and worries about the school environment.”

In some states, like North Carolina, the number of kids in home schools is actually growing faster than private school enrollment. At least at home, parents can take back the control that schools are stealing from them.

Of course, not everyone is happy about the shift — least of all big government bureaucrats, who are worried they’re losing their grip on students. Or local school districts, who lose a significant chunk of funding with each departing student. But what are moms and dads to do when the place they send their kids to learn is punishing their religion, denying them privacy, and forcing them to sit through sex-ed curriculums so pornographic you couldn’t read it on the evening news?

When President Barack Obama forced schools to open their bathrooms and locker rooms to kids of both genders, Texas Lt. Gov. Dan Patrick warned that it would “be the end of public education, if this prevails. People will pull their kids out, homeschooling will explode, and private schools will increase.” Looking back, Patrick was prophetic.

But, as usual, as the number of homeschoolers grow, so do the legislative threats. States like California would like nothing better than to clamp down on the families who want to take full responsibility for their children’s education.

Parents, state legislators and groups like the Homeschool Legal Defense Association need to be on their toes, as liberals try to fight back with tighter restrictions and more regulations on homeschoolers. In the meantime, maybe more school districts will get the message: If they’d stop being hostile to most Americans’ values, fewer parents would be running for the exits.