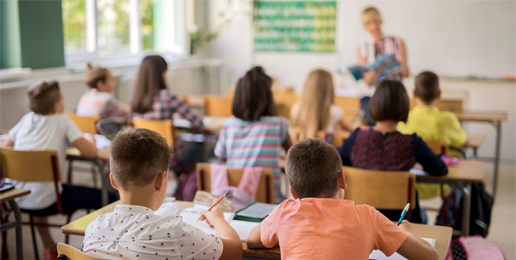 “I believe that raising a child is the responsibility of the community and that parents should not have the final say. Let’s be honest; some of you don’t know what is best for your kids. Parents believe they should be able to storm the school in the name of political and religious beliefs if something happens in the school that they are morally opposed to.

“They forget that we make a promise to prepare their children to live in a diverse world. We are not required to protect the misguided, bigoted views of their parents. If you want your children educated with your values, find a private school that will do it. The public education system is not here to serve your archaic beliefs.” ~Anthony Lane, English Teacher, Willis High School, Will Texas. Oct. 18, 2019

And there you have it. In these few short words, you now know everything you need to know about what is wrong with our country.

You now know why our culture is presently going to hell in a handbasket.

Through his brief, but clear, commentary, Mr. Lane has diagnosed the disease plaguing America better than any of the rest of us could dream of doing.

If there was any remaining question that today’s educational ruling class now believes that it should have absolute Orwellian control over all of culture and your kids, Mr. Lane’s quote should remove all doubt.

These are the people who believe they are smarter than you.

These are the people who think you are a rube and a relic.

These are the people who think they “are the ones we’ve been waiting for, and they are the change we seek.”

These are the enlightened ones, the Ubermensch, the superior class.

Never mind that they’re misogynists who deny that a female is even a biological fact.

Never mind that they’re misandrists who claim that every male, by definition, is toxic.

Never mind that they’re anti-natalist who believe that it’s a “human right to kill a human baby while, or even after, it exits the birth canal.

Never mind that they’re racists who tell us it is a moral good that there are more black children killed by abortion in New York City each year than are actually born.

Never mind that they are anti-children and believe in using boys and girls as lab rats in their gruesome adult game of sexual experimentation.

Never mind that these elite folks, with special knowledge, actually believe there are 46 genders and that it’s socially just for a man to appropriate the dignity of a woman by “blackfacing” her by pretending he’s a woman.

Never mind these poster children of arrogance and hubris actually claim they can do everything from stem the ocean’s tides to calm the tossing seas, and even stop hurricanes, tornados and earthquakes.

Never mind that these modern thinkers, these gods with gnosis, seem to believe that human beings are actually the imago dog rather than the imago Dei.

Never mind all this.

You’re the antique. You are the one who “doesn’t know what is best for your kids.” Your “views and religious beliefs” are “misguided, bigoted and archaic.”

This, my friends, is your local public school. This is the face of the 21st century “teacher class.”

As a former university president, I obviously believe in education. But I also know that as, America’s blue-collar voice, Mike Rowe, has rightfully said, the current educational model is broken. “We’re just disconnected,” says Mr. Rowe. “We’re rewarding behavior [and ideas] we should be discouraging … That’s nuts.”

In other words, by entrusting our kids to people like Mr. Lane and his school, we are giving them over to an education that isn’t just worthless financially, but deadly to their heart, mind, body and soul. We are producing graduates who not only can’t get a job but who also can’t even tell you a female is a fact and that a 7-year-old child doesn’t know much of anything, let alone how to choose his gender.

Entrusting your kids to people like Mr. Lane, and to the schools he represents, is not just “nuts,” it’s damning.

“All your life long you are slowly turning … either into a heavenly creature or into a hellish creature; either into a creature that is in harmony with God, and with other creatures, and with itself, or else into one that is in a state of war and hatred with God, and with its fellow creatures, and with itself. To be the one kind of creature is heaven: that is, it is joy and peace and knowledge and power. To be the other means madness, horror, idiocy, rage, impotence and eternal loneliness. Each of us at each moment is progressing to the one state or the other.” — C.S. Lewis