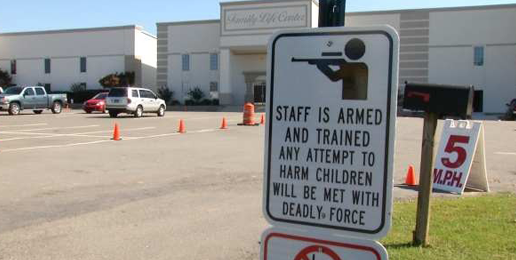 **CAUTION: Not for younger readers**

Leave it to Chicago Tribune lifestyle expert Heidi Stevens to come up with another dumb idea. In an essay titled “Who do we become if we give teachers guns?,” in which she ruminates on the proposal to allow teachers to volunteer to be trained to use a gun in those rare instances when a mass killer starts killing school children, Stevens offers this deep thought:

When did parents or anyone else ask teachers to die for our children? And to my knowledge, no one has proposed even asking teachers to carry and be trained to use guns—or as Stevens puts it, “to kill” for our children. She obviously phrases it like this to imply that defensively killing someone who is attempting to murder innocents is no different from murder. Killing is killing in the Upside Down in which Leftists live and move and have their being.

Here’s a more accurate description of what some have proposed: Knowing that there are many teachers who are already licensed and trained gun owners, some have proposed asking teachers if they would like to carry and be trained to use guns at school.

Stevens’ fatuous statement implies that asking teachers to die for our children is acceptable but asking if they are willing to kill a murderer to protect our defenseless children is beyond the pale.

I would rather throw my body in front of one of my students than raise a gun against an assailant. I may lose my life, but I will have preserved my humanity.

Vernacchio signals his virtue by claiming that “preserving” his “humanity” demands he use less effective ways of protecting his defenseless students from a murderer than more effective ways. Somehow in his twisted world—and it is twisted—his humanity is preserved by not killing a murderer, thereby making it more likely his students will be killed.

I wrote about the troubling Al Vernacchio in 2011. He’s a 54-year-old homosexual “sex scholar” and former Catholic who is “married” to a man and teaches English and human sexuality at a private Quaker school in Wynnewood, Pennsylvania, where he promotes Leftist views of sexuality to teens. Of course, Leftist Stevens would follow Vernacchio.

A 2011 New York Times article on sex education features Vernacchio and shares the topics he covers in his class on sexuality for teens. Vernacchio encourages kids to share and discuss colloquial metaphors relating to sex and explains their meanings. He discusses penis sizes, giving and receiving oral sex, and shaving pubic hair. He shows a “research video… of a woman ejaculating… and a couple of dozen up-close photographs of vulvas and penises.” Vernacchio has handed out worksheets “with the five senses printed along the top and asked the students to try and list sexual activities that optimized each. (There were examples to prod their thinking: under hearing, for instance, was ‘listening to your partner read an erotic story.’)” Vernacchio, who says he doesn’t “necessarily see the decision to become sexually active when you’re 17 as an unhealthy one,” also “rarely misses a chance to ask his students to examine gender bias in their sexual attitudes or behavior.”

This is the kind of person who Stevens looks to for insight.

Stevens urges Americans to carefully consider “what we sacrifice when we fill our classrooms with guns. What we sacrifice when we fail to examine, thoroughly and honestly, why this country has one of the highest rates of death by firearm in the developed world, why mass shootings have broken out in churches and movie theaters, college campuses and a nightclub, an outdoor concert and, again and again, schools.”

Since this country has always had a significant number of armed citizens, Stevens is wise in asking why we are now seeing such high rates of firearm deaths and mass shootings at churches, theaters, college campuses, schools, and music venues. What’s changed over the past thirty or so years?

Could it be the breakdown or rejection of the nuclear family?

Could it be exposure to violence in our video games, television shows, and movies?

Could it be the loss of small community schools and the concomitant growth of large schools that breed social hierarchies and are inhospitable places for those who are different?

Could it be the rejection of transcendent meaning and objective truth by a post-modern culture that reveres subjectivism, relativism, nihilism, Gnosticism, and even solipsism?

Could it be the abandonment of faith in Jesus Christ?

Stevens characterizes the proposal to allow trained, gun-owning teachers as an admission of “defeat in the fight to keep guns away from our children and decide, instead, to forever link ‘school’ with ‘killing ground.’”:

Who do we become when we arm our teachers? We become a nation that no longer trusts our collective humanity to triumph over evil. We commit to being so enamored of guns, so inured to bloodshed, so unwilling to imagine a better way, that we’d weaponize our classrooms.

Nice platitudinous rhetoric that ignores reality. Because of doctrinaire Leftists, we can no longer collectively agree on something as obvious as it’s inhumane to force women to share private spaces with men.

Moreover, one way to triumph over evil is to stop it dead in its tracks, which guns do better than throwing one’s body over the body of one student and better than appealing to some vague notion of “collective humanity.”

How grotesque, dishonest, and—dare I say—inhumane of Stevens to suggest that arming willing, trained teachers against people with murderous intent against defenseless children constitutes being “enamored of guns” or “inured to bloodshed.”

Does the presence of armed security at parades, the Olympics, the Capitol, and the White House mean Americans are enamored of guns or are inured to bloodshed?

Acknowledging the reality in which we live is not the same as being inured to bloodshed. Wanting to provide willing teachers a better means than their own bodies for defending children against armed assailants is not equivalent to being enamored of guns.

Stevens closes by quoting a teen who made this statement at CNN’s anti-gun advocacy spectacle that was promoted as a townhall meeting: “If a kid throws a rock at another kid in a sandbox, you don’t give every other kid a rock.”

So much wrong with that analogy, so little time.

Second, any adult present when a little child begins to throw rocks could physically stop the child because adults are more powerful than small children. In other words, the physical strength of adults provides a superior defense against the rock-throwing assault of a little child.

Third, let’s imagine a sandbox full of very young children who for some reason can’t escape. A young bully approaches and starts hurling rocks that have the potential to grievously harm or kill the young children. Also present is an adult, but she is confined to a wheel chair with no ability to physically stop the rock-thrower. The rock-thrower is pelting the little ones. They’re screaming and crying. Some are unconscious, some are bleeding. The adult now notices a pile of rocks beside her on the ground. Should she simply sit there, or should she use the rocks to try to stop the carnage? Which of these terrible choices poses a greater threat to her humanity: meeting force with commensurate force, or letting the little ones be mowed down?

Fourth, Nikolas Kruz is not a little child. He is a young adult.

Generally, it’s not wise to look to teenagers for wisdom. They have limited life experience. For the most part, they aren’t particularly well-read. If they’re in public schools, they’re likely not particularly well-taught. The impulse-control part of teenage brains is not fully developed. And they tend to be rebellious. It’s especially unwise to look to traumatized, grieving teens for wisdom or answers to complex social problems.

New York Times on Sex Education
b
a
x
r