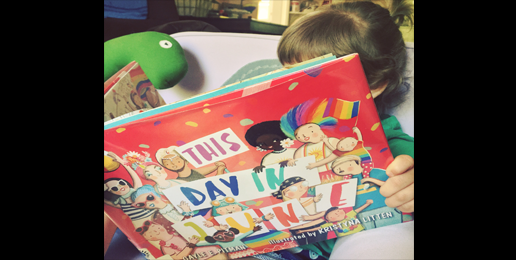 Never poke a sleeping bear or the ideology of “tolerant” librarians. IFI’s recent article by John Biver about a controversy brewing in West Chicago over a picture book for young children that positively portrays the “pride” parades that pollute city streets throughout the country every June has unleashed the fury of freedom-lovin’ librarians across the nation.

Here’s what lesbian Gayle E. Pitman, author of This Day in June and professor of gender studies and psychology at Sacramento City College, said when asked what her book is “REALLY about”:

I LOVE this question! This Day in June is really about being who you are, and not apologizing for it. When I wrote this story, I wanted Pride to be featured as realistically as possible. I wanted to see drag queens, guys in leather, rainbows, political signs, the Dykes on Bikes—everything you would see at Pride. I didn’t want any of it to be watered-down or sugarcoated. Lots of people have asked me, “Do you think that’s appropriate for children?” And my answer always is—YES. There’s something very powerful about allowing something to be portrayed authentically, because it teaches children in an indirect way to be as authentic as they can. It’s also important to recognize that children respond to Pride very differently than adults do. When adults see people wearing leather, they make certain associations to that. Children see people wearing leather and think they’re just wearing a costume, or playing dress-up. What I love most about This Day in June is that the illustrations are age-appropriate AND authentic at the same time.

What precisely is “authenticity” to Pitman and “progressive” librarians? Is “authenticity” acting on all powerful, persistent, unchosen desires? If so, is a society in which everyone is “authentic” a society conducive to moral order and human flourishing? And if a parade that features dykes on bikes, drag queens, and guys in leather is “age-appropriate,” what isn’t? What criteria do “progressives” in libraries and public schools use to determine age-appropriateness?

Pitman is not done yet. She has just released another gem for our little ones: When You Look Out the Window. It’s a picture book about infamous lesbians Phyllis Lyon and Del Martin who became lovers in 1950 and co-founded the country’s first lesbian political organization, the Daughters of Bilitis, in 1955.

John Biver’s article unleashed a torrent of librarian wrath from sea to shining sea. From all across this great land in which our forefathers spilled their blood to secure freedom for homosexuals to destroy marriage, rob children of their birthrights, and march through our streets in leather thongs, librarians are descending on IFI’s Facebook page to leave “non-judgmental” comments and reviews like these:

Deborah M Monn Bifulk (librarian), Saint Paul, MN: “Hate is not a family value. Rejecting the myriad of families that exist outside heterosexual unions is bigotry, plain and simple.”

Dawn Betts-Green (“radical militant lesbrarian”), Tallahassee, FL: “As a Pagan queer person, I don’t want to see all of the viscious [sic], hateful religious books, but guess what, they exist on the shelves of many libraries for hateful people just like you.”

Ingrid Conley-Abrams  (director-at-large of the Leftist American Library Association’s  GLBT Round Table, and a children’s librarian who has called for librarians everywhere to leave bad reviews of IFI on our Facebook page), New York City: “You are entitled to your beliefs. I do, however, find them hateful…. I won’t spend my time catering to your homophobic fantasies….”

Fobazi Ettarh, Philadelphia: “They spread ignorance and bigotry in the name of Jesus. He would be ashamed of these people.”

Leftists get apoplectic when conservatives talk about Jesus, but when Leftists do, it’s a whole different and way better ball of wax. So, since Ettarh did bring up religion, I have some questions, like, how does expressing theologically orthodox views on sexuality and marriage constitute spreading ignorance and bigotry? Why would Jesus be ashamed of those who accept his definition of marriage as the union of one man and one woman? Was she referring to the Jesus in whose name and by whose authority the Apostle Paul wrote the following:

For this reason God gave them over to degrading passions, for their women exchanged the natural function for that which is unnatural, and in the same way also the men abandoned the natural function of the woman and burned in their desire toward one another, men with men committing indecent acts and receiving in their own persons the due penalty of their error.

In a revealing blog post in which Ettarh discusses the ideology of “intersectionality” in which race, sex, class,” “sexual orientation,” and “gender identity” compete for top spot on the hierarchy of oppression, Ms. Ettarh says this:

A common value taught in library school is the importance of the librarian as an objective and neutral professional. As public servants, librarians must serve all communities equally regardless of moral values and political views. The librarian’s primary role is that of a facilitator in the public’s access to information and knowledge.

However, librarianship is inherently political. Even activities in which librarians are specifically trained to maintain “neutrality,” such as collection development, are intrinsically political…. [M]ost libraries… actively cause harm in the name of neutrality by giving voice to hate speech when neutrality is interpreted as giving equal voice to “both sides.”

Ettarh has admitted that librarians are not and—in her view—should not be neutral. Their work should be informed by their politics. Commitments to neutrality or “giving equal voice” should not be allowed to trump “progressive” politics. And when Ettarh refers to “hate speech,” remember who is permitted to define “hate.” “Progressives” like Ettarh get to define it—or rather redefine it. “Hate” has been redefined to mean “moral assumptions on sexuality and marriage with which Leftists disagree.”

Before “progressives” took control of all major cultural institutions, moral disapproval of volitional behavior was not thought to constitute hatred of persons. And even today, “progressives” don’t apply that principle consistently to their own moral assumptions. They don’t believe their moral disapproval of volitional behavior means they hate those who disagree and who act in accordance with their beliefs.

2.) Hatred may lead to violence.

4.) And, therefore, expressions of conservative moral assumptions about sexuality and marriage must be censored.

As I wrote several years ago, libraries use Collection Development Policies (CDP’s) to determine which books they will purchase with their limited budgets. CDP’s hold that librarians should purchase only books that have been positively reviewed by two “professionally recognized” review journals. Well, guess what folks, the “professionally recognized” review journals are dominated by ideological “progressives.” Publishing companies and the field of library science too are dominated by ideological “progressives,” so getting books published that espouse conservative ideas (particularly on the topic of sexuality) is nigh unto impossible.

If librarians really cared about the full and free exchange and availability of ideas and if they really believed that “book-banning” is dangerous to society, they would direct their rage and ridicule at the powerful publishing companies, professionally-recognized review journals, and their own profession, all of which do far more de facto book-banning than does a handful of powerless parents seeking to have a picture book moved.

“Progressives” used to revere the now-deceased Judith Krug, past president of the portentously named Office of Intellectual Freedom (or is it the “Ministry of Truth”?) of the American Library Association. In a 1995 interview, she famously said this:

“We never served the gay community. Now, we didn’t serve the gay community, because there weren’t materials to serve them. You can’t buy materials if they’re not there. But part of our responsibility is to identify what we need and then to begin to ask for it. Another thing we have to be real careful about is that even though the materials that come out initially aren’t wonderful, it’s still incumbent upon us to have that voice represented in the collection…. We can’t sit back and say, “Well, they’re not the high-quality materials I’m used to buying.” They’re probably not, but if they are the only thing available, then I believe we have to get them into the library.”[emphasis added]

I wonder if Leftist librarians will “demand more” conservative “materials” related to sexuality, marriage, and the “trans” ideology in order to serve the increasingly invisible community of conservatives.