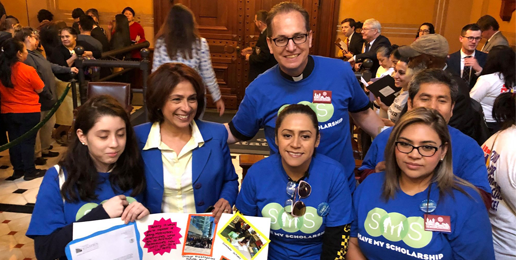 The Only Good Choice for Illinois Families is School Choice
05.30.19
PRINT

Parents have plenty of concerns as they do their best to raise their children. From the moment they are born, God entrusts parents to make the best choices for their children regarding everything from their basic needs to how they are educated.

For a very long time, most families have had no choice when it comes to the schools their children attend. Income and neighborhood determine which schools families will have to send their children to, and for many Illinoisans those schools are dangerous, underperforming, and engaged in indoctrination. Far too many government schools are led by school administrators and faculty who care more about union activities and Leftist sexuality indoctrination than they do about children.

In recent years, school choice has been a battle many parents have joined, because it should not be only wealthy parents who have the freedom to choose their children’s schools. All parents should have that freedom.

The latest challenge Illinois parents face is trying to save a fairly new private scholarships program that enables parents to have available better education options for their children and empowers parents to exercise their parental rights. If Illinois Governor J.B. Pritzker has his way, this program will end.

The “Invest in Kids Program” website summarizes how this program works to help provide donor-powered scholarships for Illinois families:

“Illinois enacted the Invest In Kids Scholarship Tax Credit Program in 2017. This program offers a 75 percent income tax credit to individuals and businesses that contribute to qualified Scholarship Granting Organizations (SGOs). The SGOs then provide scholarships for students whose families meet the (low and middle-income) income requirements to attend qualified, non-public schools in Illinois.”

According to Empower Illinois, SGO’s have raised over $61.5 million dollars from thousands of individual donors who want to help provide these scholarships and a bright future for Illinois students, schools and communities.

School choice is critical to Illinois families. It offers children much-needed opportunities to reach their educational potential early in their formative years and on through the ninth grade. Denying school choice to Illinois families is condemning kids to subpar, politicized education simply because of their family’s socio-economic status and geographic location.

Pritzker, who seeks to limit the freedom to choose for less privileged Illinoisans, comes from an affluent and influential family, who sent him to the elite and pricey Milton Academy in Milton, Massachusetts, where cultural luminaries like T.S. Eliot, Robert Kennedy, Ted Kennedy and James Taylor attended.

Without the “Invest in Kids Scholarship” program, most low- and middle-income Illinois families will never have the incredible educational opportunities that Pritzker (and his children) enjoyed and from which they benefitted. Giving a quality educational opportunity to these children today is a long-term investment in the growth of our state’s success tomorrow. Denying Illinois children this opportunity today is denying the success of Illinois tomorrow.

The #SaveMyScholarship campaign organized by Empower Illinois, and the many parents of the Tax Credit Scholarship Community with whom the organization collaborates, are working diligently to convince Governor Pritzker not to eliminate the “Invest in Kids” program.

The campaign is also educating and encouraging Illinois lawmakers about the importance of this five-year pilot program. The governor’s proposed budget would phase out the program over the next three years so that the state can direct revenues to public schools.

As The Center Square recently wrote,

“Opponents of the program have said the tax credits given to donors is revenue that could have potentially gone to public schools. The loss of public-school students to private schools also represents a loss in government funding that’s tied to total students attending the districts. In his budget proposal, Pritzker estimated cutting the program in half would bring $6 million into the state’s coffers in the fiscal year beginning in July (2019).”

What Pritzker is proposing is preposterous. He is attempting to do away with a potentially terrific program before it has time to demonstrate its efficacy. Pritzker and other supporters of his budget proposal would rather keep kids corralled in public schools that have amply demonstrated over decades their inability to provide good educations to Illinois children.

For more information and to join the #SaveMyScholarship #SMS campaign, click here.