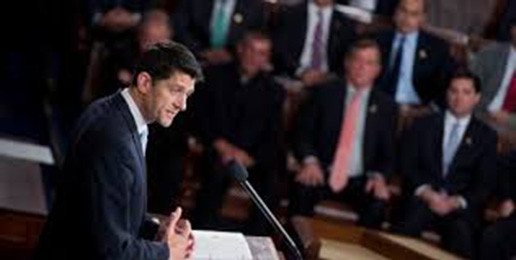 A 1,061-page rewrite of the Elementary and Secondary Education Act (ESEA), which is better known as No Child Left Behind (NCLB), suddenly popped up in the House on Monday and was voted on late Wednesday, passing 359-64. All 64 “no” votes were cast by Republicans.

At over 1,000 pages, S. 1177, the Every Child Achieves Act (ECAA) [also known as the Every Student Succeeds Act (ESSA)], like Obamacare, was too lengthy to read and digest in just two days, and yet House Republicans rammed it forward despite Paul Ryan’s prior assurances that as House speaker he would provide voters ample time to read bills prior to votes.

On November 19, Erin Tuttle, writing for the non-partisan Truth in American Education argued that Americans are entitled to read this bill before the vote:

Because the reauthorization of the Elementary and Secondary Education Act (No Child Left Behind) will be the largest piece of federal education legislation Congress will pass in over a decade, Speaker Paul Ryan (R-WI) should allow the bill to be made publicly available for at least 60 days before the House considers it.

The bill is not scheduled to be made publicly available until November 30th. Thus, a vote should not be scheduled until late January. Currently, it is scheduled for December 2; two days is clearly not sufficient. House members will be forced to vote on a bill they haven’t read.

The American people expected a new style of leadership under Speaker Ryan, not more of the same. If he allows a bill of this magnitude to become law without adequately vetting its merits and faults, it will affirm that the same ills that plagued Congress under Speaker Boehner remain fully intact.

ECAA includes some positive changes in terms of diminishing the role of the federal government in state education business, such as eliminating onerous Adequate Yearly Progress mandates. That said, there are serious problems with the bill, including the following change explained by Education Week:

[S]tate accountability systems would be required to include “not less than one indicator of school quality or student success that allows for meaningful differentiation in school performance and is valid, reliable, comparable, and statewide, which may include measures of – (I) Student engagement; (II) Educator engagement; (III) Student access to and completion of advanced coursework; (IV) Postsecondary readiness; (V) School climate and safety; and (VI) any other indicator the state chooses that meets the requirements of this clause.”

These criteria or measurements are troubling for several reasons:

Another troubling aspect of ECAA is its involvement with pre-kindergarten programs. Under Title IX, ECAA authorizes $250 million for a new federal preschool program to be administered by the Department of Health and Human Services and the Department of Education. This massive expenditure of money the government does not have is being made despite the fact that many scholars like Grover Whitehurst at the Brookings Institution doubt the efficacy of pre-kindergarten programs:

The best available evidence raises serious doubts that a large public investment in the expansion of pre-k for four-year-olds will have the long-term effects that advocates tout.

This initiative requires that preschool curricula align with Head Start (which is administered through HHS). Few are aware that since 2012, Head Start has been quietly working to align its standards with Common Core, which explains why some are calling ECAA “Baby Common Core.”

If you’re not troubled yet by the prospect of Big Brother poking his proboscis through the preschool door, perhaps this excerpt from a Head Start document will illuminate some of the goals Head Start has for our nation’s disadvantaged little ones:

Is this the organization Americans want to receive more tax dollars?

ECAA does not allow Title I funds to be portable, thus limiting school choice for parents.

ECAA does not include an Academic Partnerships Lead Us to Success (A-PLUS) provision that would have allowed states to opt out of programs that fall under ECAA and instead direct money in ways that best serve their state’s needs.

So, who loves this bill? The National Governor’s Association, which gave us Common Core; the Third Way, a center-left think tank; the Center for American Progress, a leftist public policy and advocacy group; the National Education Association; and President Obama.

Who dislikes this bill? Heritage Action, a conservative grassroots activist organization that deems a vote for ECAA to be a “key vote,” that will be reported on the lawmaker’s legislative record.

All that remains is for President Obama to sign it into law, which he has promised he will.

How Did Illinois’ Congressional Delegation Vote?

TheECAA passed late yesterday afternoon in the U.S. House of Representatives by a vote of 359 to 64.  Democrats voted 181 to 0. Republicans voted 179 to 64.  Unfortunately, our Illinois Congressional Delegation voted unanimously in favor of this intrusive, immoral, big government bill.

Support the work of IFI for your family and community

We must continue, now more than ever, to champion immutable moral principles and take a strong stand for traditional values. IFI will continue to be your voice at the capitol, in the community, in the media, and in the culture.  Bible believing Christians and true conservatives cannot afford to run the risk of complacency while anti-God, anti-American, and anti-freedom forces work overtime.

If you believe in the mission and purpose of Illinois Family Institute, please send your most generous contribution to IFI today. IFI is supported by voluntary donations from individuals like you across the state of Illinois. Donations to IFI are tax-deductible.

(All gifts to IFI are tax-deductible.)