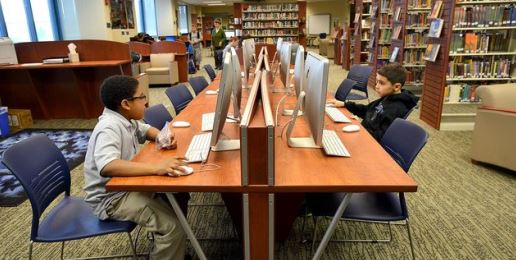 Sexually graphic websites — including child-pornography — would no longer be found at your local public library. Internet filtering technology would help clean up communities and protect children, families, and library personnel from being exposed to these harmful and illegal materials.

Take ACTION:  Click HERE to send a message to your state representative to ask him/her to support or even co-sponsor HB 2689.

You can also contact your state representative by calling the Capitol switchboard at (217) 782-2000.

The legislation is patterned after the federal Child Internet Protection Act (CIPA) that requires filters in exchange for federal E-rate funds. CIPA was found to be Constitutional by the U.S. Supreme Court in 2003. Because installing filters frees up federal funds available for libraries, there is little, if any, cost to install them — which means that in many cases installing filters is financially beneficial to libraries.

This legislation is another step in the ongoing battle to protect children from illegal pornography and Internet predators. The current policy of allowing libraries the choice to offer this material to their patrons not only violates the federal obscenity law but also endangers our children and the community. While some legislators have opposed this bill because it places a “mandate” on libraries, this mandate is critical.

The radically liberal American Library Association (ALA) and its state affiliate, the Illinois Library Association (ILA) will bring great pressure to bear in opposition to this bill, claiming that this is a free speech issue, and that filtering the Internet amounts to censorship.  However, nothing in the First Amendment requires any publicly funded institution to provide illegal material, including child pornography. Furthermore, filters don’t remove the content, they just block access on taxpayer funded computers.

The U.S. Supreme Court has recognized the fact that the government (which includes public libraries) has a “compelling interest” in protecting children from sexually explicit materials.

In Ginsburg v. New York, the U.S. Supreme Court stated that “parents who have this primary responsibility for children’s well-being are entitled to the support of laws designed to aid discharge of that responsibility.” In addition, the U.S. Supreme Court has uniformly ruled that governmental regulations may also act to facilitate parental control over children’s access to sexually explicit material.

Pornography is not protected by the First Amendment, but in fact violates the human rights of every man and woman — and especially our children. Taxpayers do not want pornography in their neighborhood libraries.

This vote will be a vote for the future safety of our children.

You can also sign up as an IFI Sustaining Partner!  Your on-going monthly support will go directly toward influencing our Illinois culture and government with Biblical values.
I cannot stress the importance and blessing your $25, $50 or $100 a month would have.

The Self-Congratulation in Banned Books Week

The LGBT (Ideological) Seduction of Our Children