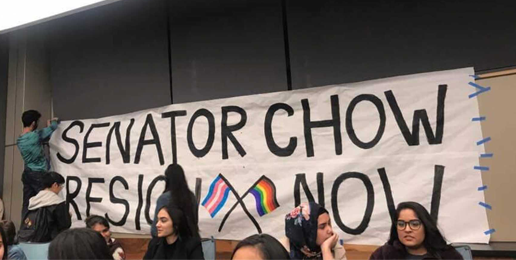 Perhaps you missed the disturbing news story about University of California Berkeley student Isabella Chow who was the only member of the 18-member student senate to abstain from voting in favor of a bill condemning President Donald Trump for the commonsense decision to make clear that in Title IX of the Education Amendments of 1972, the term “gender” refers to biological sex—which it clearly did when written. Chow bravely and graciously explained her decision to her dogmatist senate colleagues:

I have said and will always say that discrimination against or harassment of any person or people group is never ever okay. I certainly acknowledge any pain and experiences of individuals in this room who have gone through what no human being should ever go through. My heart breaks for you even more so if your pain has come at the hands of bullies and bigots who purport to be Christians but show no ounce of the love and understanding that Christ came to give. These shameful individuals only perpetuate the toxic stereotypes that my community and I vehemently abhor and even fight tooth and nail to strike from our identity in Christ.

My God is one who assigns immeasurable value to and desires to love each and every human being. In God’s eyes and therefore my own, every one of you here today in the LGBTQ+ community as a whole is significant, valid, wanted, and loved—even if and when our views differ. Jesus only had the deepest love and compassion for all who came to him. I hope that my actions and words, in addition to the relationships you and I have cultivated together, over the past couple years have only demonstrated the same depth of love and compassion.

That said, I cannot vote for this bill without compromising my values and my responsibility to the community that elected me to represent them. As a Christian, I personally do believe that certain acts and lifestyles conflict with what is good, right, and true. I believe that God created male and female at the beginning of time and designed sex for marriage between one man and one woman. For me, to love another person does not mean that I silently concur when, at the bottom of my heart, I do not believe that your choices are right or the best for you as an individual.

Where this bill crosses the line for me is that I am asked to promote a choice of identity that I do not agree to be right or best for an individual, and to promote certain organizations that uphold values contrary to those of my community. After lengthy conversations with many of my community leaders and advisors, I have chosen to abstain from voting on these bills tonight.

In closing, I again affirm with all my heart that each one of you in this room deserves nothing less than respect, acknowledgment, legal protection, and love, no matter your beliefs. I humbly ask that you extend the same respect and acknowledgment to my community as we continue this dialogue together. The Christian community is here to love and serve this campus in the way that we best know how. Thank you for your understanding, and please feel free to reach out to me at any time if you want to discuss this or anything else.

Chow did not vote against the bill. She abstained and in so doing freely exercised her religion.

So, how have those tolerant, free-thinking, anti-bullies at Berkeley responded? The campus newspaper, the Daily Cal, condemned her in an editorial, saying that her words were “appalling” and “homophobic and transphobic according to Daily Cal’s standards.” (Curiously, the gracious words of a theologically orthodox Christian are censored, while a deviant sex column written by a Daily Cal editor fits their “standards”). Those pesky Daily Cal exegetes claimed that Chow “chose to voice her personal—and highly problematic—interpretation of Christian scripture.”

The unhinged ideologues opined that “This abject dismissal and non-acceptance of gender identities goes far beyond personal opinion. Chow’s language erased and dehumanized individuals… Chow must stop framing these remarks as personal opinions or views. These statements are offensive and disturbing invalidations of human beings.” What exactly does it mean to erase and invalidate human beings? Disagree with their ideas and beliefs? Disapprove of their actions? Define differently the meaning of their subjective feelings?

What about the Daily Cal editors’ personal opinions and views? Do they go “far beyond personal opinion” (whatever that means)? Does their description of theologically orthodox Christian identities as “appalling,” “offensive,” “dehumanizing,” and “disturbing”—by their definition—erase, marginalize, and dehumanize Christian human beings?

The Berkeley suppressors and oppressors weren’t done yet. They started a petition to force her to resign. They spent three hours in a subsequent meeting publicly condemning her while she sat under a huge banner that said, “Senator Chow Resign Now.” I guess they couldn’t find a pillory and scarlet thread.

On social media, she was called a “‘horrible person’” and a “‘mental imbecile.’” Regan Putnam, president of the Queer Alliance Resource Center (which brought the bill idea to the senate) and apparently a cross-dressing man, falsely accused Chow of “shrouding hate in ‘love.’” He didn’t define “hate,” but as near as I can tell, “hate” to him means holding moral propositions about volitional acts with which he disagrees. To be clear, the beliefs of the Berkeley tyrants that homosexual acts are moral, that marriage has no intrinsic connection to sexual differentiation, and that cross-sex “passers” are entitled to access to opposite-sex facilities are arguable, subjective moral propositions.

At least as disturbing was the poor showing of support for Chow. The San Francisco Chronicle reported that only three students spoke in defense of this courageous young woman. Those theologically orthodox Christian students who knew about this controversy and failed to attend the public pillorying of Chow and speak in her defense should be ashamed.

The kind of indoctrination that masquerades as education and results in this kind of repugnant behavior does not start in college. For Leftists, there is no age too young to begin indoctrinating other people’s children, no means too devious, and no public cost too high. Here in Illinois, Leftist legislators continue to try to foist their personal ontological, moral, and political beliefs on children by concealing them in curricula. Leftists in Springfield are still pushing the “LGBT” sexuality indoctrination bill (SB 3249) which, if passed, will require that any “book or book substitute that will be used as a text or text substitute” in grades K-12 include the “role and contributions” of homosexuals and of men and women who adopt opposite-sex personas (also known deceptively as “transgender”). In other words, all materials used in schools will be required to address the roles and contributions of people who define themselves by their disordered sexual desires and sexual behaviors.

As I wrote in April 2018, there are no good reasons for teachers or textbooks to mention or discuss the sexual interests of contemporary or historical figures who have contributed something noteworthy to society. Their exceptional accomplishments should be noted, but their sexual proclivities—especially controversial sexual proclivities that many view as both immoral and destructive—have no place in public schools.

Would any lawmaker vote in favor of mandating that schools teach about the “roles and contributions” of polyamorists and poly-activists, or the roles and contributions of other communities whose identities are constituted by what many view as disordered desires and immoral volitional activities, like “amputee-wannabes,” infantilists, zoophiles, sadomasochists, and sibling-lovers (i.e., “Genetic Sexual Attraction”)?

“LGBTQ” activists take umbrage at such comparisons, declaiming that their sexual predilections constitute an authentic identity somehow set apart from those who identify as polyamorists, amputees, or babies, to which others may respond, “Who are you to judge?”

What if children or their parents experience such desires, engage in behaviors impelled by such feelings, or identify as poly, “amputee wannabes” or “infantilists”? What if they experience unwanted “minor attraction,” “genetic sexual attraction” or zoophilia? If homosexuals and “trans”-identifying persons should be able to see their predilections represented in curricula, shouldn’t other identity groups be able to see themselves represented in curricula? Should the accomplishments of people throughout history who experienced such feelings be excluded simply because they don’t yet have a powerful lobbying group that invents language that cloaks their beliefs in the appearance of objective facts?

We all know that schools—at least for now—wouldn’t teach about the accomplishments of polyamorists, “amputee-wannabes,” sibling-lovers, zoophiles, infantilists, or sadomasochists. Even if school leaders believed the feelings of persons in these groups were powerful, persistent, and unchosen, and even if school leaders believed biochemistry influences the development of their feelings, school leaders would not allow k-12 students to be taught that an important historical figure was a polyamorist, “amputee-wannabe,” sibling-lover, zoophile, infantilist, or sadomasochist. Why is that?

The reason is not merely that no one has yet demanded that they do so. The reason is that school administrators and board members—at least for now—believe the behaviors integral to those conditions are unhealthy, disordered, and immoral and that teaching about the role and contributions of those who engage in them would serve to normalize the phenomena.

Well, here’s an inconvenient truth: many believe the same about homosexuality and the science-denying cult of biological sex-rejection. What right have arms of the government (i.e., public schools) to treat the beliefs of Leftists on those two issues—homosexuality and opposite-sex impersonation—as if they were objectively true?

Leftists are not helping to develop citizens who value the good, the true, and the beautiful. They’re constructing ignorant, arrogant, bigoted, hateful ideological tyrants like the Berkeley bullies—not free thinkers. Don’t let the indoctrination get any worse here in Illinois.

Take ACTION: Click HERE to send a message to both your state representative and state senator, urging them to reject this effort to politicize curricula in order to advance biased beliefs about sexuality to children in government schools. Contact them repeatedly.