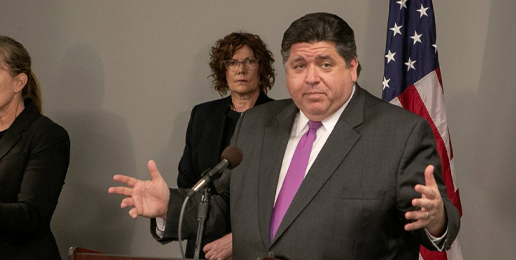 Governor J.B. Pritzker recently issued Executive Order 2021-20 Covid-19 Executive Order No 87, a mandate to mask while indoors. This mandate went into effect on August 30, 2021. Not stopping at masking, he also ordered that all school personnel for K-12 be vaccinated or tested weekly. In section 6 subsection b, the governor states that either the Illinois Department of Public Health (IDPH) or Illinois State Board of Education (ISBE) may require testing more often than is currently designated by the executive order for both staff and students. The state intends to use the ISBE to enforce its mandates on schools.

As if this forced masking and aggressive testing is not enough, State Representative Edgar Gonzalez, Jr. (D-Chicago) has introduced a bill that goes further toward controlling private education. If passed, HB 4135 will allow the ISBE to revoke state recognition of any school, public or private that does not follow orders from the Public Health Department or emergency health orders issued by the governor.

This bill will also prevent school boards from passing resolutions that go against the IDPH or executive orders and will require schools to investigate all complaints of non-compliance.

Finally, it will give the Illinois State Superintendent of Education the authority to require a non-compliant school to go to remote learning.

The leftist ISBE is attempting to interfere with private schools already. They are threatening the accreditation of private schools even though a legislative committee has not yet reviewed the proposed HB 4135. Recently, the ISBE contacted Christian Liberty Academy in Arlington Heights regarding the mask mandate. The school — which has experienced explosive growth since last year — had determined each family should decide whether or not to have their child wear a mask. Policies developed resulted in success in mitigating the risk in the previous school year while allowing parents and students the freedom of choice. Regardless of the school’s previous success, the ISBE is penalizing the school over the mask policy.

State Superintendent of Education Dr. Carmen I. Ayala wrote that the ISBE was immediately rescinding Christian Liberty Academy’s state recognition as a nonpublic school due to not complying with mask mandates. The revocation of their state recognition means the school can no longer participate in Illinois High School Association (IHSA) or Illinois Elementary School Association (IESA) regulated sports. They and their families will also no longer be able to participate in Invest in Kids Tax Act scholarship program, a tax incentive that allows individuals and businesses to receive a 75 percent tax income credit for donations of scholarships to students in need. It seems that the ISBE is the militant arm of the state to control private education.

Take ACTION: There must be a two-fold response to this injustice. First, the schools currently accredited by the state must unite to legally fight the cancelation of accreditation. Voters can assist this fight by demanding that our legislature votes no on HB 4135. Click HERE to send a message to your state representative to ask him/her to vote against HB 4135.

The second response is to “come out from them and be separate,” as directed in 2 Corinthians 6:17. Conservative Christians eventually will not be able to depend on government oversight of education. We must find ways towards certification without the ISBE’s control. Various independent accrediting associations can provide a school with the necessary accreditation without the state’s interference.

Parents and churches should strive to fund alternative private education, as well as encourage their private schools to reject government accreditation. Private schools can come out from under the oppressive shadow of the ISBE, but we, the community, must be ready to support their efforts in every way. If you are concerned about HB 4135 and the unfair interference of the ISBE, please get in touch with your state legislators.