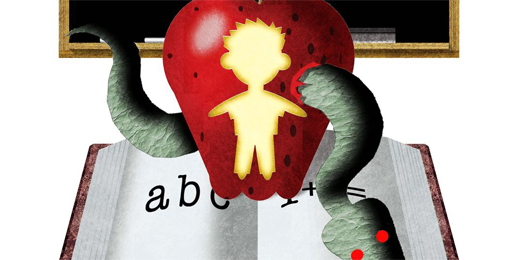 How Modern Education Has Destroyed the Next Generation’s Soul
03.04.20
PRINT

Hardly a day goes by that you don’t hear the question: How did we get in this mess?

Where did this lunacy come from, and how did it all happen so quickly?

Imagine that we live in a day where we intentionally sever a man’s arm from his body and then expect him to win a fight.

Imagine that we live in a country where it’s common practice to remove a woman’s eyes from her head and then ask her to paint her portrait.

Imagine that ours is a time where we surgically alter a child’s frontal lobe and then demand he explain an algebraic formula.

Imagine that we live in such a world; a world where, as C.S. Lewis warned, the elite among us claim it makes sense to “remove the organ and demand the function;” a time and a place where we “geld the stallion and then “bid him be fruitful.”

How did we get in this mess?

Why would we expect decades of teaching sexual promiscuity in our schools to result in sexual restraint in our students? Why are we surprised at the selfishness of our culture when we have immersed several generations of our children in a curriculum that teaches self-esteem more effectively than it does science and civics? How can we possibly think that teaching values clarification rather than moral absolutes will result in virtuous people?

Where is there any evidence in all of human history that the subordination of a child’s right to be born to an adult’s right to choose ever resulted in the protection of any individual’s unalienable right to life? And why would any culture ever think that after decades of diminishing the value of marital fidelity that the same culture would then be able to mount a vigorous defense for the meaning of marriage and morality, or anything else for that matter?

This list could go on and on. The evidence is clear. All you need to do is Google the daily news to see the proof. When you have schools that revel in separating fact from the faith, head from heart, belief from behavior and religion from reason, the result will never be liberty. It will always be licentiousness.

Severing things that should be united has a very predictable result. “Removing the organ while demanding the function” gives us “men without chests,” an electorate of those who have nothing but a gaping cavity in the center of their being; a callousness of mind; an emptiness of conscience; vacuity where there should be virtue. As the wisdom of Solomon tells, cutting babies in half always results in dead babies.

Ours is a day of delusion. We destroy ourselves by our dishonesty. We boast of freedom and yet live in bondage to deception. We champion human rights, yet we ignore the rights promised to us by reason, revelation and our own Constitution. We march for women while denying that women are even real.

We claim to stand for the dignity of children but remain silent while their dignity is mocked in the ivory tower’s grisly game of sexual nihilism. We are what M. Scott Peck called “people of the lie.” The road to hell is before us, and we enter its gates strutting with the confidence of an emperor with no clothes. And, when we are challenged, we belittle the “incredulous rubes” and the “deplorables” who dared shout out of our nakedness.

Santayana once said that those who don’t learn from history are doomed to repeat it. Well, here is one irrefutable lesson of the past: Ideas always have consequences. Education matters. It will always lead somewhere. Our schools will either take us toward the liberty found in that which is right and just and true and real or toward the slavery made of our own dysfunction and lies.

Why are we in this mess? It is because of our local schools, colleges and universities. When you relentlessly work to remove the next generation’s soul, you should not expect your culture to stay out of hell.

“All your life long you are slowly turning … either into a heavenly creature or into a hellish creature: either into a creature that is in harmony with God, and with other creatures, and with itself, or else into one that is in a state of war and hatred with God, and with its fellow creatures, and with itself. To be the one kind of creature is heaven: that is, it is joy and peace and knowledge and power. To be the other means madness, horror, idiocy, and rage … Each of us at each moment is progressing to the one state or the other.” — C.S. Lewis “Mere Christianity”

Dr. Everett Piper, former president of Oklahoma Wesleyan University, is a columnist for The Washington Times and author of “Not A Day Care: The Devastating Consequences of Abandoning Truth” (Regnery 2017). This article was originally published at the WashintonTimes.com.

Resurrection Sunday: When Jesus “Cancelled” Death
b
a
x
r