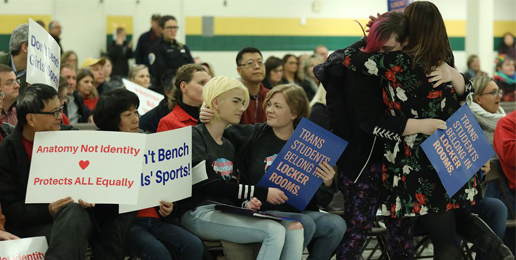 I don’t write very often because, frankly, I find it difficult. As a witness to the events of our day, I am often overwhelmed by their significance and stymied by my own inability to put into words any analysis that seems to do justice to the magnitude of moral, spiritual and intellectual disintegration taking place all around us.

The Township High School District 211 school board meeting last Thursday night at Fremd High School was an example of just such an event. Although the results were expected (the school board voted 5-2 to grant special rights to “trans”-identifying students) it was still a surreal experience to witness. The approved policy will allow biological male students unrestricted access to girls’ locker rooms (and vice versa)—meaning that they will not be required to undress behind a privacy curtain. During swim class, everyone out in the locker room will be able to see each other’s genitalia. The new policy also opens the door to male and female students sharing hotel rooms on field trips.  In case you’re wondering, girls’ sports are an apparent non-issue. Male students who identify as female have been playing on the girls’ teams for years.

At the meeting, 25 randomly chosen members of the public were allowed 3 minutes each to address the board.  Many who spoke were in favor of the policy change. It was their comments that most arrested my attention. If insanity can be defined as a disconnect from reality, then surely insanity was on parade Thursday night at Fremd High School.

First and foremost, it must be understood that supporters of the purported “rights” of “trans”-identifying students do not claim that we must affirm such students’ erroneous perception of themselves as the opposite sex. No–and read this next part carefully: These people claim that a male student who perceives himself to be a girl actually is a girl. Chromosomes and genitalia count as nothing. Oh, and by the way, you are not to think of this as a “mental problem.” This is all perfectly “normal.”

Take a deep breath and let that sink in.

Those of us who aren’t quite educated enough to actually believe that males who believe they are females really are females are apparently expected to pretend we do. False gender affirmation was presented over and over again as a moral imperative. In fact, we were told essentially that if our schools fail to affirm gender dysphoric (GD) students as the opposite sex, we will all have blood on our hands. Why? Because, we are told, GD students will commit suicide if their delusion of being the opposite sex is not encouraged and supported. We’re told this in spite of the fact that the link between suicide and social treatment has yet to be scientifically established. Is it just me or does this strike anyone else as a conveniently warped version of emotional blackmail?

Now that we have apparently accepted this dubious claim and capitulated, is there any limit to what “LGBT” activists can demand of us? That is no longer a rhetorical question.

Do I dare point out the obvious? A mentally healthy person doesn’t commit suicide because other people refuse to pretend that he/she is something they are not–especially something as obvious and foundational as male or female. While all students–including students with GD–should be treated with kindness, anyone in their right mind understands that when it comes to biological sex, we are what we are. The best possible outcome for GD kids is to make peace with reality and learn to love and appreciate the healthy, beautiful bodies God gave them. How will they do that if everyone, including their schools are encouraging them in continued delusion?

Demanding that the whole world suspend reality because some people are either unwilling or unable to accept it does not begin to approach a reasonable solution. The whole issue illustrates a degree of intellectual and moral lunacy I had heretofore assumed humanly impossible except among the clinically insane.

And once again, where were the pastors and elders–those who are supposed to be the protectors and bearers of truth? There are over 90 churches in D211, and this was the last of four meetings where extensive public comment was heard on this policy. Apart from three notable exceptions our spiritual leaders were missing in action. If a pastor doesn’t stand up for truth on behalf of children in his own community will he ever?  Unfortunately I think we know the answer.

So, where do we go from here? When the Left eventually gains enough power in Washington D.C., the gloves will come off and “LGBT” activists will wage war against biblical Christianity under the guise of civil rights. This is a certainty. For the most part, it is only God’s people who offer any real resistance to their plans for our dystopian future. They know this. That is why they and their allies at the ACLU criss-cross the country looking for Christian business owners to sue. These actions stand as a warning to any who might dare cross them in the future.

The famous quote attributed to George Orwell seems to have been written for our day: “During times of universal deceit, telling the truth becomes a revolutionary act.” Are we prepared to be revolutionaries? I am not sure that we are. But ready or not, we must be. God’s people are people of the truth. God help us.