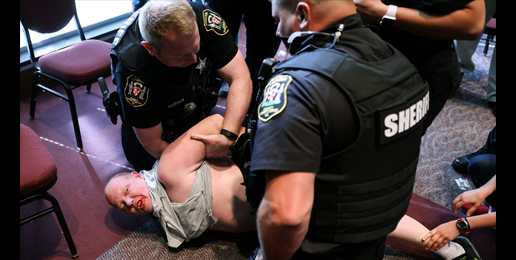 The first victim’s father, Scott Smith, attended his first school board meeting ever on June 22, 2021, just 3 1/2 weeks after his daughter’s sexual assault. Many community members attended the meeting to discuss the board’s policy of sexually integrating the private spaces of minor students and of compelling teachers to lie by using incorrect pronouns when referring to cross-sex impersonators. A woman who through her rainbow t-shirt identified herself as an “LGBTQ+” activist, quarreled with Smith including telling him she did not believe his daughter was raped by a skirt-wearing boy in the girls’ restroom. The police-intervened and Smith—like the Covington Catholic High School boys—was turned into a national villain by leftist activists who identify as “journalists” and no longer have the patience or integrity to investigate stories before maligning people.

I wonder how leftist fathers would react if their 15-year-old daughters had been sodomized in a girls’ bathroom at their “safe” schools and then had an activist tell them she doesn’t believe it happened.

When conservatives and feminists who oppose men in women’s private spaces express fear that the actual safety—not “microaggressions” that hurt feelings but macro-assaults that hurt bodies—of girls is jeopardized, leftists assert that no female-impersonator would ever assault a girl or woman. Apparently “trans”-identifying persons are not only the picture of mental health but the picture of moral perfection as well.

When conservatives and feminists express concern that sexual predators may pretend to be gender dysphoric in order to access their prey more easily, soothsayer “trans”-activists aver that no predator would ever do such a thing.

Now that that thing has been done, expect leftists to dismiss these crimes as few and far between.

Instead, school administrations and teachers’ unions protect teachers who prey on minor children. And now school districts, state boards of education, state lawmakers, and the federal government collude to increase the risk of girls being sexually assaulted by implementing policies that sexually integrate restrooms and locker rooms.

The Loudoun County School Board bears some responsibility for the assault of Mr. Smith’s daughter. Perhaps Mr. Smith and the parents of the other victim have the basis for a successful lawsuit against a district that failed to take reasonable measures to protect their daughters.

Now that rational parents have finally had enough of leftist usurpation of public schools for their own pernicious ideological purposes, Biden has sicced the big federal guns on them. Biden’s audacious attorney general Merrick Garland has issued a “memorandum” in which he declared,

I am directing the Federal Bureau of Investigation, working with each United States Attorney, to convene meetings with federal, state, local, Tribal, and territorial leaders in each federal judicial district within 30 days of the issuance of this memorandum. These meetings will facilitate the discussion of strategies for addressing threats against school administrators, board members, teachers, and staff, and will open dedicated lines of communication for threat reporting, assessment, and response.

Americans should disabuse themselves of the mistaken notion that Garland is taking aim only at threats of violence. His “memorandum” concludes with this:

The Department is steadfast in its commitment to protect all people in the United States from violence, threats of violence, and other forms of intimidation and harassment. (emphasis added)

Expect Biden’s Newspeakers to redefine “intimidation” and “harassment” in whatever way suits their dogmatic fancy.

In addition to the physical safety of girls, there are several other important principles at issue:

2.) Scientific reality: We now have cultural leaders, including lawmakers, physicians, and teachers saying anti-science, nonsensical, deceitful things like men can menstruate, give birth, and “chestfeed,” and some women have penises.

3.) Identity and religious discrimination: We have school administrations—taxpayer-funded government employees—commanding teachers and students to speak lies, coercing them under threat of punishment to participate in a destructive delusion that violates their conscience and for many their religious beliefs. There is no ethical or constitutional justification for subordinating some students’ religious identities to the socially constructed “gender identities” of other students. There is no ethical or constitutional justification for discriminating based on religion, which is exactly what punishing Christian faculty, staff, or students for refusing to lie constitutes.

4.) Sex-based rights: Women and men have a right to be free of the presence of persons of the opposite sex in private spaces where they undress, shower, or tend to bodily functions. That right exists because men and women are fundamentally different, and in some contexts, those differences matter. Feelings of modesty and the desire for privacy when undressed or engaged in bodily functions are natural and good and should be respected. All men and women are entitled to such privacy protections, but girls and women have an additional need for such protections. Girls and women are vulnerable to sexual assault from males—from both adolescent and adult males.

Parents must fearlessly persevere in this battle for truth in the schools that our taxes subsidize. This a stewardship issue. This is a citizenship issue. And this signals whether we love children–all children–or not.

This is a fight for the future of America. Leftists in control of public schools are in the process of destroying America from within by indoctrinating the next generation of culture-makers. They are destroying America by destroying the hearts, minds, and bodies of children.