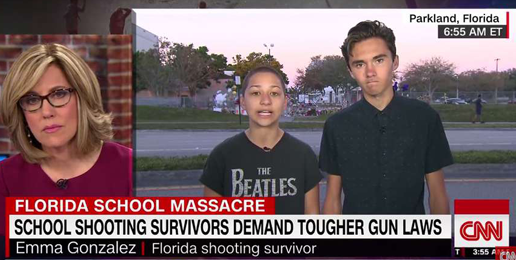 Another School Shooting, Another One-Sided Debate About Reality
Written By John Biver   |   03.07.18
PRINT

My goal in these next couple of articles is to make three basic points.

First, after every mass murder, whether at a school or nightclub or concert venue, conservatives write many excellent op-eds effectively addressing nearly every aspect of the tragedy. Unfortunately, too few Americans actually hear or read those commentaries. That failure in the information war continues to plague the nation.

Second, so many Republican politicians and candidates fear the “social issues.” Several days ago when a shooting took place in that Florida school, these “leaders” still failed to grasp the connection between a failing and corrupt culture and mass murder.

Third, in a terrific piece over at The Federalist, Stella Morabito asks a question about the public (government-run, taxpayer-funded) schools. Here is the title and lede of her article:

“13 Ways Public Schools Incubate Mental Instability In Kids”
The correlation between public school environments and the deteriorating mental health of children has been intensifying for decades.

Stella Morabito’s point is one I’ve been making for years when I have referred to the public schools as “Lord of the Flies child warehouses.” “Lord of the Flies” is a reference to a novel that has been made into a movie twice about 30 schoolboys who are marooned on an island where they attempt to govern themselves and instead become savages.

The long-running national discussion about bullying in public schools always raises the question to which few good answers are offered: Where are the adults in these schools?

The “child warehouses” part gets to the point about what constitutes a proper learning environment. It’s not complicated: no child can learn when the atmosphere is not conducive to learning. You can read more of my argument here.

Here is the opening of Morabito’s article:

Why doesn’t anyone investigate the toxic effects of today’s bureaucrat-run mega-schools in the wake of a school shooting? It’s high time we place a share of the blame there.

Apologists for these noxious systems continue to shift blame for their failures using the media, various left-wing lobbies, and the kids themselves as programmed mouthpieces for statist agendas like gun control. Meanwhile, they keep feeding the beast by mass institutionalizing kids.

The correlation between public school environments and the deteriorating mental health of children has been intensifying for decades. We ought to consider how these settings serve as incubators for the social alienation that can fuel such horrors.

First, consider how common it is for a public high school today to house thousands of teenagers for most of their waking hours for four solid years. (More than 3,000 students attend the Florida school where the most recent shooting took place.) During their time in that maze, kids learn to “socialize,” basically by finding their place in a school’s hierarchy of cliques.

This sort of pecking order dynamic tends to breed resentment, status anxiety, and social dysfunction. Combine that with the toxic effects of social media and family breakdown, and you’ve got a deadly brew. Public schooling is increasingly unhealthy for kids’ emotional stability.

To the second point: Conservative office-holders and candidates have no clue how to fight the information war and, therefore, have no ability to stand up for what’s right when it comes to the culture. In a recent op-ed at American Thinker titled “A Weak and Crumbling Foundation,” Deana Chadwell writes:

If we grew up certain:

· that God is just a convenient fairy tale;
· that the government’s purpose is to take the place of indulgent parents;
· that sexual desires, all sexual desires should be fulfilled ASAP;
· that people are just the evolutionary top of the food chain;
· and are merely animals and therefore expendable;
· that drugs are enlightening;
· that truth is nonexistent;
· and that, most important of all, utopia is within our reach because we know better than God how to organize a nation,

…then what do we do when we see even our most important leaders functioning as if there is no moral code? What do we think when the people we see as special turn out to be sexual predators? How are we to understand our misery when our children OD on opioids, kill themselves over Facebook bullying, or kill others just because they are angry or want to be famous? How do we handle it when we pray to the God we no longer believe in and get no response at all?

What do we do? Most people look around desperately for someone else to blame, or even better, some inanimate object to hold accountable. Ban guns! It takes no moral courage to blame a thing, but it takes massive internal fortitude to look in the mirror and blame the unsustainable ideas we’ve held dear now for several generations.

It’s hard to look at the slaughter of our children in a schoolyard, but we are still willing to kill them by the thousands in an abortion facility. It’s horrifying to see the damage wrought by social media, but we don’t have the stomach to face down our spoiled children and deny them access. It makes us sick to see the sexualization of our young children, but we’re too spoiled ourselves to limit our own indulgence in nearly pornographic television. We don’t seem to have the national backbone to admit our part in the destruction of our offspring.

And the screamers don’t follow up their hollering with careful thinking about what taking guns out of our society would look like. There are over 300 million privately owned firearms in this country. We understand — those of us who know anything about history — how important it is that we keep them. We know that all our other rights rest on the right to defend ourselves against tyranny. I’m not giving up mine without a fight, and I don’t think I’m alone in that. The confiscation of guns in America will be a bloodbath that makes Parkland look insignificant.

“The Parkland shooting proves that our culture is a disaster,” she writes, “not that our gun policies are. We need to be able to face that fact, or there will be hell to pay.”

Up next: A Case Study: Pro-Second Amendment Arguments Do Not Reach Enough Americans.