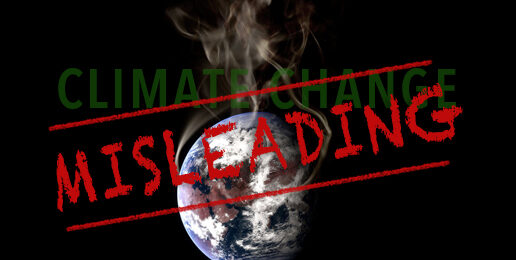 The Global Warming Policy Forum (GWPF) called out the International Red Cross for releasing what it calls a “grossly misleading” report on climate change. The Red Cross report claims the number of climate and weather-related disasters have increased by 35% since 1990, when a UN report released in October shows climate-related disasters have declined by 15 percent in the last 20 years.

In a press release, GWPF Director Dr. Benny Peiser called on the Red Cross to “withdraw its report or face accusations of using unethical practices to mislead the public.” GWPF is a London-based climate policy think tank.

According to Peiser, “The Red Cross’s own report documents a pronounced-decline in climate and weather-related disasters since that time, so they have grossly misled the public.”

The Red Cross report titled, “World Disasters Report 2020: Come Heat or High Water,” stated, “The number of climate and weather-related disasters has been increasing since the 1960s, and has risen almost 35 percent since the 1990s.”

“The authors of the Red Cross report have used the EM-DAT dataset which shows a significant decline in climate-related disasters since 2000,” said Peise. “It is generally acknowledged that the dataset is unreliable before 2000.” An EM-DAT is an emergency events database 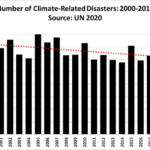 The October UN report titled, “Human Cost of Disasters: An Overview of The Last 20 Years,” the GWPF referenced was criticized on Twitter by Roger A. Pielke, Jr., a political scientist and professor of environmental studies at the University of Colorado in Boulder. Pielke tweeted, “It will be interesting to watch the up-is-down reporting on the new UN report on disasters. The graph below is from data in the report (Figure 5, p. 10). It shows that “climate-related” disasters have declined by 15 percent over the past 20 years (2000-2019).”

Pielke also cited a 2007 Center for Research on the Epidemiology of Disasters (CRED) and EM-DAT Annual Report which stated a “major contributor to the increase in disasters occurrence over the last decades is the constantly diffusion and accuracy of disaster related information.”

The press release includes a chart from Our World in Data which shows the global annual death rate from natural disasters has decreased over the last 100 years from a high of nearly 28 per 100,000 people in the 1920s to less than 2 per 100,000 in the 2010s. According to the GWPF release, “Any credible assessment of the link between global warming and natural disasters should also highlight the remarkable decline in the number of people dying from climate disasters, showing a sharp and continuing decline in the last 100 years, despite the rise in global temperatures.”