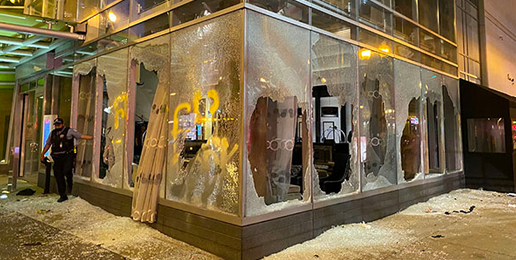 This morning we were greeted with more alarming news from the City of Chicago: 100 people arrested and 13 Chicago Police Officers injured after groups of rioters unleashed chaos, smashed windows, and looted stores. They targeted Chicago’s Magnificent Mile shopping district and other parts of the city’s downtown. That news comes in addition to the “other” news that at least 35 people were shot and 3 killed in weekend gang violence.

Reports of mass shootings in Chicago are common, and the liberal narrative is to automatically blame “guns” for the human carnage. Yet we don’t see guns shattering glass, setting fires or looting businesses.

“We have been embarked on what I would call a proactive strategy that looks at our gun violence as a public health crisis, which is what it is. That means we look at the root causes of the violence. That means we invest in neighborhoods, we re-stitch together our broken… social safety net.”

She continued to assert:

“Police can’t be successful if they’re not viewed as legitimate by the community, and a community will not be safe if the police are not engaged in a respectful, constitutional partnership with the community…”

Fourteen months later, the brave men and women in the Chicago Police Department are considered the enemy and gang violence is bolstered by liberal policies that grant early prison release to criminals. To make matters worse, the Chicago Tribune reported today that left-wing Kim Foxx (Cook County State’s Attorney) is

“dropping felony cases involving charges of murder and other serious offenses at a higher rate than her predecessor, according to a Tribune analysis that comes amid a growing debate over criminal justice reform.”

At what point will the Chicago media declare these “progressive” politicians incompetent? At what point will Chicago voters see how incapable they are to address these critically serious problems? When will they stop electing the same bleeding heart liberals who keep giving us death, destruction and debt?

Clergy members have got to fearlessly reject the business-as-usual politics that has teenagers and children being gunned down in the streets. Sincere Christian servant-leaders (and Statesmen) must step up and boldly declare the truth of the Gospel and the benefits of following God’s commands and precepts, as it is the only true antidote to fatherlessness, which feeds the recruitment needs of neighborhood street gangs.