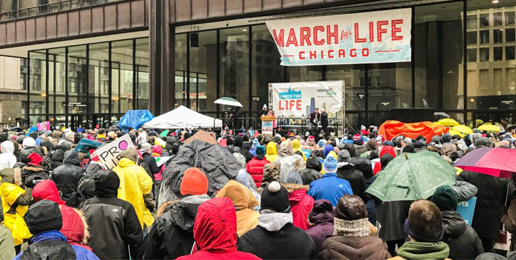 On January 11th, 9,000 pro-lifers  gathered for the Chicago March For Life at Daley Plaza in the icy wind and rain as they held up signs and cheered. There was no way the wind and rain was going to stop the March.

Pro-lifers, determined to speak for the unborn at this yearly event, showed up in droves with the highest attendance to date, despite the weather. The sound of bagpipes, drums, cheering, and even jeering was loud in my ears. My story began before the rally even started.

A writer from the Chicago Tribune approached me to get my view of the event, most of which she left out of her article altogether. My brother and I had arrived much earlier than we had planned (about 45 minutes before the rally started) so there weren’t many people for her to choose from. She asked me questions such as, “Didn’t the weather forecast deter you at all?” “Why are you here today?” And, of course, what seems to be a reporter’s favorite question, “Why is that?”

She wanted to know why I was there. I told her that I had been going to the march with my church for a few years and I was there because I wanted to take a stand for what I believe in. I told her that our laws regarding abortion do not reflect modern science. Roe v. Wade came into play before ultrasounds were commonly utilized in the U.S. Ultrasounds now clearly show that it’s a little PERSON in a womb, not a blob of tissue. A baby that sucks his thumb, can recognize his mother’s voice, and even has food preferences!

“We believe life is sacred.” This is the only comment attributed to me. But much more than my comments were left out. The Tribune carelessly numbered the participants as being “at least 1,000” marchers when we were closer to 9,000. The pictures affirm that estimate. What we stand FOR – Life and its Value – was left out and the focus was instead on what we are against – the killing of a preborn human being. The prayers were also not mentioned in favor of a quote from an angry advocate of the “right” about taking the life of another.