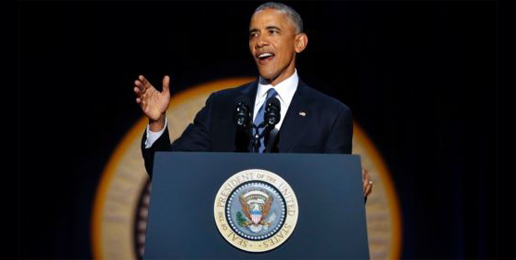 Last week President Barack Obama delivered his farewell address. Aside from his lovely tribute to his family, there were more than a few portions of his address that raised eyebrows, hackles, and dander.

For 240 years, our nation’s call to citizenship has given work and purpose to each new generation. It’s what led…slaves to brave that makeshift railroad to freedom. It’s what pulled immigrants and refugees across oceans and the Rio Grande, pushed women to reach for the ballot….It’s why GIs gave their lives at Omaha Beach and Iwo Jima; Iraq and Afghanistan—why men and women from Selma to Stonewall were prepared to give theirs as well.

It’s both audacious and offensive for Obama to compare the struggle of blacks for freedom from slavery, segregation, and Jim Crow laws or the sacrifice of soldiers fighting to defeat evil totalitarian regimes to the protests of homosexuals clamoring for America to affirm and celebrate homoeroticism.

Obama then boasted about his galling impropriety, spuriously couching it in language that appeals to our better selves:

If I had told you eight years ago that America…would win marriage equality… you might have said our sights were set a little too high.  But that’s what we did.

Obama and five U.S. Supreme Court Justices did not win marriage “equality.” They imposed a radical revision of the legal definition of marriage on the entire country. Equality demands that like things be treated alike. Equality does not demand that we treat unlike things as if they were alike. An intrinsically sterile union of two people of the same sex is as different from a union composed of two people of different sexes as men are from women (which is a difference that even homosexuals acknowledge is real, substantive, and profound). Homosexuals have always been free to marry. They’ve been as free to marry as polyamorists have been. They weren’t fighting for a right they were denied. They were fighting for the unilateral right to revise the legal definition of marriage.

Obama inadvertently alluded to this when he referred to “reinvention”:

Our youth, our drive, our diversity and openness, our boundless capacity for risk and reinvention means that the future should be ours. But that potential will only be realized if our democracy works. Only if our politics better reflects the decency of our people.

Obama has used every extra-legal and unconstitutional means at his disposal to force people to share restrooms, locker rooms, and shelters with persons of the opposite sex. He has undermined true marriage and eagerly endorsed family structures that deny children their intrinsic right to be raised by a mother and father. He refers to people who publicly proclaim their embrace of homoeroticism as heroes. He has vigorously supported the putative “right” of women to have the humans growing in their wombs killed and believes taxpayers should subsidize this barbarity. And Obama has the audacity to talk about decency.

“Now, I’ve lived long enough to know that race relations are better than they were 10, or 20, or 30 years ago, no matter what some folks say.”

Surely Obama jests. More likely he lies. Well, perhaps race relations are better than they were in 1996 or 1986, but are those improvements the result of Obama’s words and actions? More to the point, are race relations better now than they were eight years ago, before Obama assumed office?

In an interview that aired shortly before Obama’s farewell address, liberal pundit Stephanopoulos asked him  about his record on race relations: “The heart of your promise when you first burst on the national scene, bringing everyone together. And you look now and most African-Americans think we’ve gone backwards on race relations over the last eight years. What do you say to that?”

Obama responded, “I am absolutely convinced that race relations on the whole are actually better now than they were 20 years—.” An incredulous Stephanopoulos interrupted him: “Better now?”

Obama, whose honey-tongue (or is it forked tongue?) masks his extremist and divisive cultural agenda, continued:

…[I]f our democracy is to work in this increasingly diverse nation, then each one of us need to try to heed the advice of a great character in American fiction—Atticus Finch–who said “You never really understand a person until you consider things from his point of view…until you climb into his skin and walk around in it.”

Has Obama walked around in the skin of orthodox Christians—especially those who are being persecuted for their faith? While “progressive” business owners have the freedom to live in accordance with their deeply held convictions by refusing to provide baked goods, music, or dresses, orthodox Christians are sued for doing likewise. One dress designer justified her refusal to design a dress for Melania Trump: [W]e consider our voice an expression of our artistic and philosophical ideas.” Apparently Obama spends more time walking around in designer clothes and little time walking around in the skin of Melissa and Aaron Klein who lost their bakery business and were fined $135,000 because of their artistic, philosophical, and religious ideas about marriage.

Obama warned about the deep distrust Americans have of government:

When trust in our institutions is low, we should…insist on the principles of transparency and ethics in public service.

When Obama entered office he promised his would be “the most transparent administration in history,” but in a scathing report for the Committee to Protect Journalists, Washington Post vice president at large Leonard Downie Jr. wrote that the Obama “administration’s war on leaks and other efforts to control information are the most aggressive I’ve seen since the Nixon administration.”

Obama continues to foment division even in his waning days. He commuted the sentence of traitor Bradley (aka “Chelsea”) Manning who was convicted of 17 charges resulting from leaking 700,000 pages of classified or sensitive government documents to Wikileaks that, according to experts, resulted in incalculable and ongoing damage to national security. Obama commuted his sentence from 35 years to 7, a commutation that even Democrats oppose.

Obama also offends with his audacious reference to Manning as “she” despite the fact that Manning has not yet been castrated and despite the scientific fact that castration and cross-sex hormone-doping cannot turn Manning into a “she.” This is particularly ironic in light Obama’s supposed commitment to science and reason:

But without some common baseline of facts, without a willingness to admit new information, and concede that your opponent might be making a fair point, and that science and reason matter, then we’re going to keep talking past each other, and we’ll make common ground and compromise impossible.

Surely a scientifically-grounded, reasonable man like Obama knows that it’s not actually possible for Manning ever to be a woman. Even a child can tell that he’s a man in the empress’ new gown.

In his farewell address, Obama proclaimed “Our Constitution is a remarkable, beautiful gift.” Equally remarkable, his nose didn’t grow when he said it.

If he actually did believe our Constitution is a beautiful gift, he wouldn’t have abused it. In a congressional hearing, Left-leaning and well-respected constitutional scholar Jonathan Turley warned about the danger to the Republic posed by Obama’s abuse of executive actions to legislate:

The danger is quite severe. The problem with what the president is doing is that he’s not simply posing a danger to the constitutional system. He’s becoming the very danger the Constitution was designed to avoid.

At the beginning of this article, I provided the definition of audacity—well, I provided one definition of audacity. There’s another. Audacity also means “boldness” or “daring.” As Obama at long last leaves office, let’s not follow in his impudent, at times even galling footsteps. Let’s step into the public square with boldness, constrained by our remarkable Constitution and unsullied by impropriety.