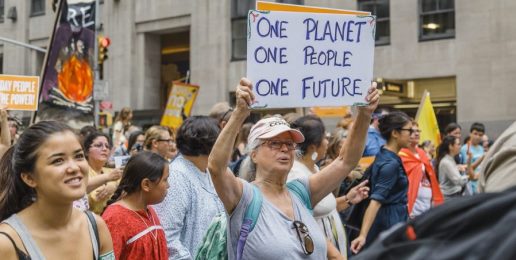 The March for Science is Really a March for Conformity
04.21.17
PRINT

I am a scientist, but I won’t be joining the worldwide March for Science April 22. That’s because it’s really a march for something that undermines good science.

In particular, it doesn’t extend to diversity of opinion about two controversial ideas. The first idea is that you evolved from ape-like ancestors by unguided processes such as accidental mutation and natural selection. The second idea is that manmade global warming threatens civilization, and our government must take drastic action to stop it, even if that means wrecking the economy.

History should teach us to be wary of consensus.

Skeptics of the first idea are labeled “creationists.” Often, they are expelled from science altogether. And if global warming alarmists have their way, skeptics of the second idea may soon be criminally prosecuted.

Note the hypocrisy. Organizers describe the march as “a call to support and safeguard the scientific community.” But then they silence and expel those who won’t bow to the community’s majority opinion — the “scientific consensus.”

History should teach us to be wary of consensus. In 1750, the scientific consensus held that maggots are generated spontaneously in rotting garbage. In 1900, it held that atoms consist of electrons orbiting a nucleus like planets around the sun. In 1910, it held that the continents had never moved. In 1940, it held that protein, not DNA, is the stuff of heredity.

All of these views turned out to be wrong. And the history of science is full of other such cases.

The Message of the March: Ignore the Evidence and Trust Us

Some of our newly elected politicians refuse to bow to the scientific consensus on evolution and global warming. So defenders of the consensus are marching to pressure them to submit.

The American Association for the Advancement of Science (AAAS) is a big supporter of the march. So is the National Center for Science Education (NCSE).

The AAAS vigorously defends evolution. The NCSE insists “there is no scientific debate” over evolution. And they strongly oppose criticisms of it. They were in classic form last month in Indiana. The Indiana Senate had resolved that students should be “informed” about “scientific evidence” regarding evolution and develop “critical thinking skills.” The NCSE called this language “antiscience.” Why? It might lead students to raise uncomfortable questions about the evidence for evolution.

As a biologist I know there is a scientific debate over the evidence for evolution. There are dissenters. And some are willing to speak out publicly even though doing so may threaten their careers.

The reason for the dissent is simple. The evidence does not support Darwinian evolution. Mutation and natural selection have never been observed to produce anything more than minor changes within existing species.

In place of evidence-based science, Darwin and his followers have relied on materialistic philosophy. That philosophy says only matter and physical forces are real. It says mind, spirit, free will, God and intelligent design are illusions.

In 1859, Darwin wrote that he “would give absolutely nothing” for his theory if it required “miraculous additions at any one stage of descent.” He allowed only unguided natural processes. In other words, Darwinism is materialistic.

For many in the nineteenth century, this was its most attractive feature. As Historian Neal Gillespie explained, “It was more Darwin’s insistence on totally natural explanations than on natural selection that won their adherence.”

As a scientist, I am bothered by this. Science is supposed to seek truth by testing hypotheses against the evidence. But evolution is materialistic story-telling. And the story persists even when the evidence contradicts it. I call this “zombie science,” and I describe many examples of it in my book of the same name. I’ll mention just one here. Students are shown drawings of some embryos of animals with backbones. In the drawings, all the embryos look similar in their earliest stages. Darwin believed this showed that we evolved from fish. But the story is false. Worse, mainstream biologists have long known that the drawings are false. They know that human and fish embryos look very different in their early stages. But many textbooks recycle the lie year after year anyway. Why? Because the materialistic story must be true.

The Sky is Falling

The Union of Concerned Scientists (UCS) is a big supporter of the March for Science. The UCS started as a leftist political movement in the 1960s, and it still champions various progressive causes. One of these is environmental activism. According to the UCS, “an overwhelming majority of climate scientists” believe in manmade global warming. More than that, “there is no debate” among scientists over global warming. None. Nada.

The AAAS and NCSE are also determined to enforce the consensus on global warming.

But there is a scientific debate over manmade global warming. Some climate scientists think the evidence does not support the consensus. The way to address the question is to debate the issue. It’s to weigh the evidence pro and con. Yet the UCS would silence dissenting scientists.

What really matters in science is not an opinion poll. It is the evidence. And some scientists argue persuasively that the evidence does not support Darwinian evolution or manmade global warming.

So the March for Science is not really about “evidence-based policies.” It is about enforcing the scientific consensus. It is about materialistic philosophy and progressive politics. And you’d better believe it!

Jonathan Wells, Ph.D. is a senior fellow of Discover Institute’s Center for Science and Culture. He’s the author of Icons of Evolution, The Politically Incorrect Guide to Evolution and Intelligent Design, and the new book Zombie Science: More Icons of Evolution.

This article was originally posted at Stream.org