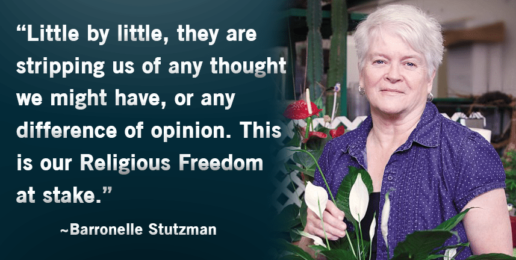 Alliance Defending Freedom filed a brief Friday with the Washington Supreme Court that answers arguments the state and the American Civil Liberties Union have made in favor of government discrimination against a floral artist, whom they sued for acting consistently with her faith.

ADF attorneys asked the state high court to take up the case in June of last year after a lower state court ruled that Stutzman, owner of Arlene’s Flowers in Richland, must pay penalties and attorneys’ fees for declining to use her artistic abilities to design custom floral arrangements for a long-time customer’s same-sex ceremony. Rather than participate in the ceremony, Stutzman referred the customer, whom she considers a friend and had served for nearly 10 years, to several other florists in the area who would provide high-quality arrangements and wedding support.

“Barronelle and many others like her around the country have been more than willing to serve any and all customers, but they are understandably not willing to promote any and all messages,” said ADF Senior Counsel Kristen Waggoner. “No one should be faced with a choice between their freedom of speech and conscience on one hand and personal and professional ruin on the other.  Americans oppose unjust government actions that strong-arm citizens to create expression against their will.”

As the ADF reply brief explains,

“The case boils down to this question: is there room in our tolerant, diverse, and freedom-loving society for people with different views about the nature of marriage to establish their ‘religious (or nonreligious) self-definition in the political, civic, and economic life of our larger community…?’ The trial court’s and [the state’s and the ACLU’s] answer is ‘no.’ Their view is that those who seek to establish their self-identity based on the millennia-old view that marriage is solely between a man and a woman may be coerced by law to express different views or be silenced. This is contrary to the best of our historical and constitutional traditions, which mandate that citizens who hold non-majoritarian views be given room to express them and not be coerced, punished, and marginalized through force of law.”

“The trial court’s and [the state’s and the ACLU’s] view—that there can never be a free speech exception to public accommodation laws—endangers everyone,” the brief continues. “If correct, then the consciences of all citizens are fair game for the government. No longer could a gay print shop owner decline to print shirts adorned with messages promoting marriage between one man and one woman for a religious rally. Nor could an atheist painter decline to paint a mural celebrating the resurrection of Christ for a church. Indeed, no speaker could exercise esthetic or moral judgments about what projects to take on where a customer claims the decision infringes on his or her rights under the WLAD [Washington Law Against Discrimination].”

“People in creative professions regularly have to make decisions about where they lend their artistic talents and the events in which they will participate,” Stutzman said. “For me, it’s never about the person who walks into the shop, but about the message I’m communicating when someone asks me to ‘say it with flowers.’ The government should respect everyone’s freedom—including our artistic freedom and core religious beliefs about marriage—and not force us to create expression that violates our conscience.”