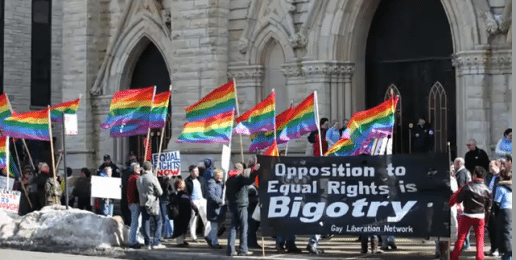 Usher In A Redefinition of Marriage, Usher Out Religious Liberty
03.08.13
PRINT

Disagreements and projections abound in the dialogue about marriage and its redefinition to include same-sex couples. But both sides agree on one issue: redefining marriage significantly jeopardizes religious freedom—the first liberty upon which our nation was founded.

The convergence of several factors creates this unavoidable clash between religious liberty and redefining marriage. First, the vast majority of religious adherents in America believe that marriage is the union of one man and one woman. And because marriage is a core component of religious convictions—indeed, many spiritual traditions treat it as a holy sacrament—people of faith are not likely to change or disregard their views on this central question of conscience.

Second, marriage permeates our law and culture. Thus countless situations will require all citizens, including those who are religious, to affirm or facilitate a fundamentally redefined understanding of marriage.

Third, if the government declares that same-sex unions and opposite-sex unions equally constitute marriages, the law punishes and stigmatizes as “discriminatory” and “irrational” those who publicly espouse a view or conduct themselves in a manner that adheres to the traditional understanding of marriage.

History illustrates the persecution of, and an absence of tolerance for, those who engage in what the law has proclaimed to be irrational discrimination. The freedom of the religious faithful—particularly their freedom to participate in the public square—will thus be sacrificed in a society whose laws embrace a redefined view of marriage.

Legal scholars who favor redefining marriage agree that this religious-liberty conflict is real. Chai R. Feldblum, a law professor at Georgetown University and current EEOC commissioner, believes that advocates for redefining marriage have incorrectly “downplayed the impact of such laws on some people’s religious beliefs.” Renowned religious-liberty professor Doug Laycock and many others agree that conflicts between same-sex marriage and religious freedom are inevitable.

This crisis of conscience is not just a matter of legal theory; it is confirmed by real-world examples.

Laws redefining marriage have forced religious organizations to shutter their foster and adoptive ministries because they are unable to place children with same-sex couples. Among other examples, this senseless religious intolerance occurred immediately following the redefinition of marriage in the District of Columbia, even though many other foster and adoption agencies were willing and able to place children with same-sex couples.

After a court redefined marriage in Massachusetts, public schools began teaching young elementary-school students that same-sex marriage is worthy of celebration. Parents who objected for religious reasons asked to excuse their children from these lessons. Yet a court denied parents even this modest religious protection, stating that because “Massachusetts has recognized gay marriage under its state constitution, it is entirely rational for its schools to educate their students regarding that recognition.”

Redefined marriage laws have also compelled organizations with deeply held beliefs about marriage either to recognize the same-sex unions of their employees or to stop providing spousal benefits to all employees. In the District of Columbia, a Catholic organization terminated benefits to all of its employees’ spouses just so that it could continue to operate consistently with the dictates of its faith. And in New York, an employee of a Catholic hospital sued her employer demanding that it recognize her same-sex relationship and provide benefits to her partner.

Additionally, laws redefining marriage have also forced public servants with sincere religious convictions about marriage to resign from their positions. In New York, at least two municipal clerks suffered this fate. Similarly, in Saskatchewan, the courts refused to safeguard the conscience rights of marriage commissioners, despite the fact that the province had more than 370 marriage commissioners, most of whom did not object to presiding over a same-sex ceremony.

All of these examples, which are but a few of the many that could be cited, illustrate the bleak prospects for conscience rights and religious tolerance in a culture that embraces genderless marriage.

Sound logic, scholarly consensus, and recent experience all demonstrate that redefining marriage presents a significant threat to religious liberty. We as a society thus face a crossroads and must decide whether to change marriage to satisfy the demands of a few despite sacrificing the religious freedom of many. We should collectively choose to affirm marriage, decline to deviate our course, and continue along the road where religious liberty—a bedrock of our civilization—may flourish.

NOTE: This article was originally publish on Townhall.com, and is the fourth column in a series of columns related to National Marriage Week, Feb. 7-14, 2013. The third column is available HERE.