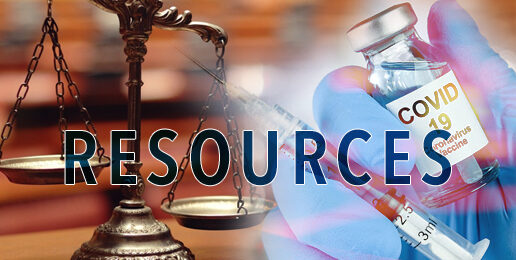 Vaccines are not a threat to liberty. However, being forced to submit to taking medicine and/or a medical procedure that is both controversial and troublesome to many of us is.

Vaccine mandates are a violation of the unalienable individual right to liberty, endowed by God our Creator, which is prohibited by the American system of government.

Christian responsibility in America isn’t to follow the wishes, and especially orders, of whomever in a position of authority recommends a particular action.

Christian responsibility in America, to submit to the governing authorities (Romans 13:1), is to: a) vote, speak, and hold office so as to protect and defend the Constitution (i.e., self-govern), and b) follow elected or appointed representatives exercising legitimately enumerated powers which don’t violate State and individual rights or God’s law.

Forcing an individual’s choice of medical treatment, such as mandated COVID vaccination, is about as un-Constitutional and un-American as one can get.  It was the medical experimentation on Jews in Nazi Germany that resulted in the Nuremberg Code [1].

Furthermore, an Illinois law that’s been on the books since the 90’s protects individuals from being forced to accept any health care service that violates their conscience. The relevant section:

(745 ILCS 70/5) (from Ch. 111 1/2, par. 5305)
Sec. 5. Discrimination. It shall be unlawful for any person, public or private institution, or public official to discriminate against any person in any manner, including but not limited to, licensing, hiring, promotion, transfer, staff appointment, hospital, managed care entity, or any other privileges, because of such person’s conscientious refusal to receive, obtain, accept, perform, assist, counsel, suggest, recommend, refer or participate in any way in any particular form of health care services contrary to his or her conscience.
(Source: P.A. 90-246, eff. 1-1-98.)

Vaccines do not reduce disease spread, immunity does.

A new study out of Israel described by Bloomberg as “the largest real-world analysis comparing natural immunity – gained from an earlier infection – to the protection provided by one of the most potent vaccines currently in use” showed that the vaccinated were 13x as likely to be infected as those who were previously infected, and 27x more likely to be symptomatic. (emphasis added.)

Vaccines are for the purpose of inducing immunity, while reducing the impact of an illness as widespread public immunity develops.  Diseases like flu and COVID aren’t very good candidates for vaccination because with modern treatments, a) they aren’t serious enough for most people not to just conquer the illness on their own, thereby developing natural immunity, and b) viruses tend to mutate faster than we can safely develop new vaccines.

Vaccine-induced immunity, while worthwhile for some, is necessarily inferior to natural immunity, partly because of the measures taken to avoid producing the more serious symptoms of the illness itself.

Current COVID vaccinations have been rushed to market (the first “full” FDA approval of a COVID vaccine was last week [2]), with apparently substantial shortcuts and unusual [3] overlooking of severe adverse events. Never in medical history has a vaccine been developed and approved so quickly.

If you are now convinced, or already were, to defend your liberty (and those of other Americans) against heavy-handed government vaccine promotion, several legal organizations have provided sample letters to employers who are wrongly mandating vaccination in genuflection to current political despots or face losing their job.

Requests for religious accommodation by federal law must be in writing, and Alliance Defending Freedom [4] and other trustworthy sources have developed legally and Biblically sound template religious accommodation request letters below, including the most important objections reflected in law and recent U.S. Supreme Court affirmations of religious liberty.  We highly recommend these as a pattern for drafting such a letter to your employer.

Also provided below is a letter providing your pastor’s agreement to the religious objection, which can be submitted if you wish to further strengthen your religious objection. The America’s Front Line Doctors form provides a list of questions employers should be presented with relating to the assumption of responsibility if an adverse reaction should occur.

We support your individual right to choose, as an American, to vaccinate or not.

Let us pray that God will use this effort to persuade businesses to protect the liberties of their employees against government tyranny rather than supporting it!

[3] By contrast, in 1982 Eli Lilly recalled the popular and effective drug, Oraflex, a drug for the pain and inflammation of arthritis based upon 61 deaths in Britain and 11 deaths in the U.S.  3,867 (of 9,470, or 40%) adverse event reports have been filed with the FDA for deaths of those receiving the single approved vaccination (Pfizer).   https://wonder.cdc.gov/vaers.html