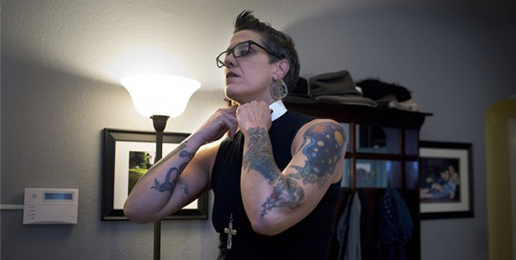 No argument there. Sin has been in the world since that terrible, horrible, no good, very bad day in the Garden. Since then, our bodies have been wired to desire and respond to all sorts of sinful activities. That hardly seems a defense of engaging in them.

Now Bolz-Weber, who stepped down from the adolescently named House for All Sinners and Saints church (HFASS, get it, half-a**) is in the news for asking women to send their purity rings to her, which she is going to melt down and fashion into a golden vagina. Nothing says Christian love quite like mocking virginity in a vulgar piece of fake art.

I’m inviting women to mail in their purity rings for a massive art project. @SweetBirdStudio [Nederland, Colorado jewelry maker Nancy Anderson ] is collaborating with me to melt them into a sculpture of a vagina… join in and get your certificate of impurity!

Though this project is offensive, it’s not surprising from Bolz-Weber who praises the bloody work of Planned Parenthood that makes bank on sexual promiscuity and the tiny inconvenient humans that are the disposable products of sexual promiscuity.

Obviously favoring the news over the pews, Bolz-Weber, the inked-up, obscene, viril-ish pastor proclaims herself rather than Christ and his kingdom to the world. Bolz-Weber is mother to two teens; married to Matthew Weber who is the pastor of Holy Love Lutheran Church (ELCA) in Aurora, Colorado; and describes herself as a “dyke.”

Bolz-Weber spouts the common “progressive” tripe that because Jesus spent time with the marginalized, the church should affirm homosexuality and opposite-sex impersonation. She conveniently omits the rest of the accounts of the time Jesus spent with the marginalized. He spent time with them—not chewing the fat, going to amusement parks with them as she does, and affirming their sin. He called them to repent and follow him, to deny themselves and take up their crosses daily, to live “no longer for human passions but for the will of God,” to put off old selves which belonged to former manners of life that were corrupted through deceitful desires,” to be renewed in the spirit of their minds, and to put on their new selves “created after the likeness of God in true righteousness and holiness.”

Bolz-Weber, who has two books on the New York Times bestseller list and a huge idolatrous fan base, has left her church but not her hellbound ministry. She is on a world tour of heretical churches to promote her newest book Shameless: A Sexual Reformation. In an interview, she expressed her goal for the book:

I want people who read this to re-think their ideas about sexual ethics, gender, orientation, extra-marital sex, and the inherent goodness of the human body. We are reaching for a new Christian sexual ethic that’s not based on a standardized list of ‘thou shalt nots,’ but on concern for each other’s flourishing, letting go of shame.

Bolz-Weber is not encouraging sexual holiness and letting go of pathological shame that derives from an inadequate understanding of or refusal to accept God’s forgiveness. Rather, she seeks to lead Christians to let go of biblical standards of sexual holiness and desensitize them to the work of the Holy Spirit that leads Christians to feel guilt or shame when they sin. Her devilish work is to eradicate conscience, so people are free to live lives of sexual sin. Her pursuit of hedonism marks a return to paganism.

While she claims she resigned in August because the church she built no longer needs her (a truer thing was never spoken), this suspicious mind speculates that it was either greenback pastures or the lure of being worshiped on a larger stage or both that led her to resign.

Unfortunately, she left her sheep to be led further astray by homosexual shepherd Reagan Humber who is a man “married” to drag queen “Fruit Bomb,” one of whose performances is of him bad-lipsyncing while performing fake abortions.

Leading people astray is Bolz-Weber’s business. She recently gave a Facebook shout-out to “my girl,” Rev. Emily Scott, a graduate of Yale Divinity School who is starting a new ELCA church in Baltimore, Maryland called “Dreams and Visions” where “false binaries are left behind” and “queerness is holy.”

Bolz-Weber admits to having been mercilessly bullied at school during childhood because of bulging eyes, a result of Graves’ disease, an immune-system disorder that wasn’t diagnosed until age 12. She attributes her “rage and cynicism,” and high school drinking and drug use to the bullying. This should serve as a cautionary tale to parents. If your child is being bullied at school, find a way to pull him or her out. Bullying can lead to all manner of emotional, psychological, social, relational, sexual, and spiritual dysfunction.

Pray for Bolz-Weber. Pray for healing and for an end to her ministry that undermines human flourishing and puts at risk the eternal lives of those who follow her. She leads them not to freedom but bondage.

And be vigilant. Watch for wolves stealthily creeping into your church. Some are harder to discern than Nadia Bolz-Weber.