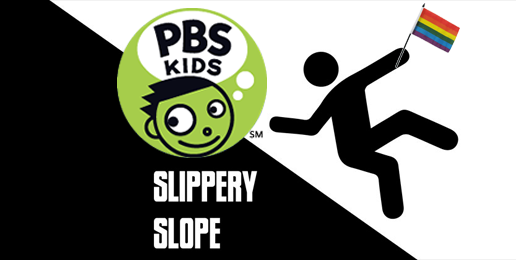 They Said There Was No Slippery Slope, But This Teen Says Otherwise
07.19.21
PRINT

But if you cause one of these little ones who trusts in me to fall into sin,
it would be better for you to have a large millstone tied around your neck
and be drowned in the depths of the sea. Matthew 18:6 NLT

About two years ago, the popular animated kids show Arthur broke boundaries when the show’s writers decided the teacher, a regular character on the show, was homosexual. This garnered mixed reviews with some praising the decision, saying Arthur was breaking social norms and introducing children to an important topic, while other, more rational people said they did not want a show meant for four to eight-year-olds to discuss such a controversial topic.

Unsurprisingly, the decision to reveal Mr. Ratburn’s sexual identity was praised by members of mainstream media who soundly criticized all who opposed it. Supporters often spouted rebuttals such as, “Why are you so upset? It’s just one scene of two men holding hands. It only lasts about five seconds,” but conservatives were concerned about the slippery slope, which they have been told is not real.

It appears, however, that not only is the slope real, but it’s also worse than most conservatives feared. Two short years ago, it was scandalous that an animated children’s show would include two homosexual characters, and now we have the perversion of the Blue’s Clues pride parade scene  and drag queen story hour on PBS Kids, neither of which have received nearly as much backlash as the Arthur storyline did.

Exposing young children to highly sexualized content cultivates an inappropriate awareness of sexuality in toddlers and preschoolers. What the media and the government are trying to do to children is despicable, and the worst part is kids do not understand what is being done to them. They do not understand the brainwashing that is occurring, the normalization of ideas and behaviors that are abnormal, and the insidious agenda that encourages children to question their sexual identity. Children should not have to think about these things. No one should have to think about these things but especially not children, because they are impressionable and easily confused.

According to The Washington Post, one out of six Generation Z adults are part of the LGBTQIA+ juggernaut. When will we say enough is enough? We have tolerated and ignored this moral decay–this sin–for too long. It seems that many conservatives have become complacent; they are just watching the world crumble before them.

We must not stop being outraged at the evil we see around us, and we should not stop voicing our opposition for fear of being “cancelled.” As conservatives, we have to make it clear that we are not giving into this leftist propaganda. We must still be willing to fight for what is good, right and true.

Evan O’Bryan is a high school senior and aspiring political influencer who has been raised in the faith and Christian education since preschool. He is a staunch supporter of Christianity, the MAGA movement, and Conservative ideology. He enjoys challenging the mainstream liberal narrative with those who haven’t yet reached the truth.